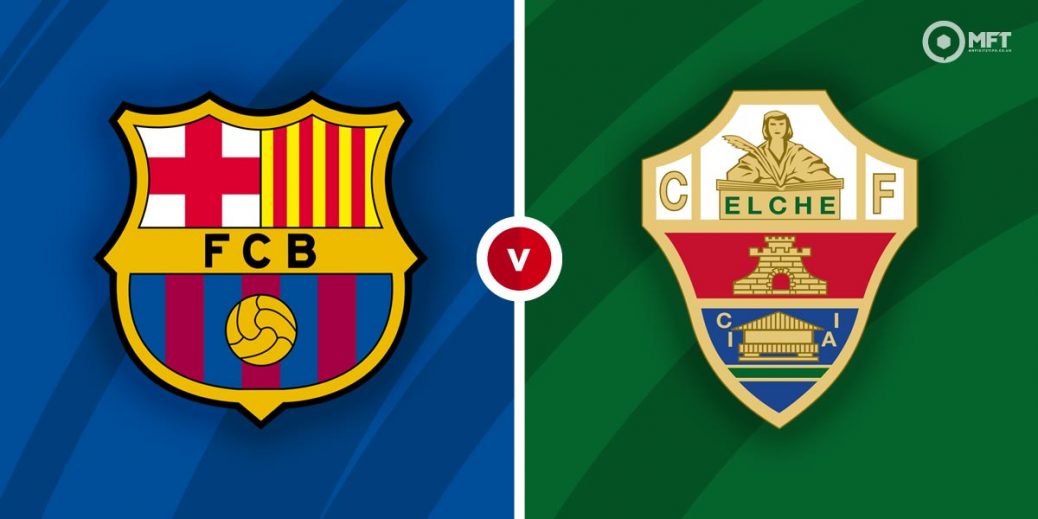 Barcelona will be looking to revive their failing La Liga hopes with a midweek clash against struggling Elche at the Camp Nou. They have been in good form in the Spanish top flight lately and should be too strong for their relegation threatened visitors.

The Catalans followed up their disappointing Champions League defeat with a 1-1 draw against Cadiz in their previous La Liga outing. It was a thoroughly dominant and one-sided contest and Barcelona will be disappointed not to have secured the win.

Despite the draw, Ronald Koeman's men are still one of the form sides in La Liga at the moment having won seven of their last eight matches. They are still well behind Atletico Madrid but with the league leaders stumbling at the moment, they certainly have plenty to play for.

Key to Barcelona’s recent resurgence has been the return to form of talisman Lionel Messi. The Argentine forward is playing some of his best football at the moment and has scored nine goals in his last six matches.

Elche are finding life difficult on their return to La Liga as they are currently battling near the bottom of the table.
However, they did claim a 1-0 victory against Eibar in their previous La Liga outing thanks to Dani Calvos' first half effort.

The victory ended a run of seven matches without a win for Fran Escriba's men. However, the result did little to ease their relegation worries as they remain 18th on the table, level on 21 points with Eibar.

Elche have also been poor travellers this season and head to Camp Nou with no wins in their last eight away matches in La Liga. They have also lost their last two fixtures on the road, including a 3-1 defeat at Celta Vigo.

The bookies have installed Barcelona as overwhelming favourites in this fixture with SBK backing the hosts to win at 2/13. Elche are outsiders at a massive 22/1 with betfair while a draw is valued at 43/5 with SBK.

Given Barcelona’s recent resurgence, a home win is almost certainly on the cards on Wednesday.

Barcelona have never lost to Elche in eight previous meetings. They have beaten the visitors seven times with just one match ending in a draw.

The Catalans have also never conceded a goal against Elche and claimed a 2-0 victory in the reverse fixture.

As always, Barcelona will be banking on Lionel Messi, who has scored 16 goals this season. Bet365 has the Argentine to score anytime at odds of 3/10. Given the insignificant value in the anytime goalscorer market, a punt on Messi to score the first goal could be considered with bet365 offering 15/8.

Striker Lucas Boye is the top scorer for Elche with four goals this season and is priced at 28/5 with Sporting Index to score anytime.

Barcelona to win odds offer very little value, so a different market should be considered. They have scored three or more goals in two of last three La Liga matches, which makes a flutter in the handicap market worth a punt with betfair offering evens for a -2 home handicap.

Lionel Messi has a penchant for scoring multiple goals in matches and is backed to score two or more goals at 11/8 by sporting Index.

This La Liga match between Barcelona and Elche will be played on Feb 24, 2021 and kick off at 18:00. Check below for our tipsters best Barcelona vs Elche prediction. You may also visit our dedicated betting previews section for the most up to date previews.