When it comes to horse racing I like to think I know my way around a racecard. However, to the uninitiated, all the numbers and abbreviations can seem a little daunting and enough to put people off from getting involved in the Sport of Kings so let's take a look at what it all means.

So in today's masterclass, and with the help of our resident racing tipster, I'm going to teach you how to read a race card as well as understand all the abbreviations thoroughbred racing.

If you already enjoy a little wager on a horse race, then there is no harm in refreshing your knowledge off track.

I've broken down a sample racecard to help any beginners out there understand what all the info that's crammed in actually means; 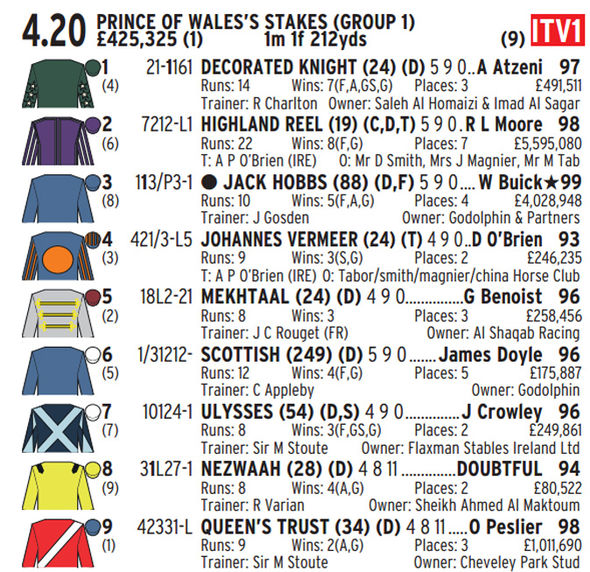 The first thing to notice is the colourful array of shirts the jockeys wear. These are largely representative of the horse's owners whose stable of horses will often run in the same colours or silks. It's therefore not uncommon for an owner to have two or more jockeys in the same race wearing the same colours.

Next, you'll note all horses are listed in numerical order, in this instance 1-9.

Note that on online racecards the horses can often be listed in betting order with the favourite at the top.

Under the horse's number, you can see another number in brackets. This is the number of the stall the horse will start the race from in a flat race, called its draw. The draw can be an important factor, especially in shorter races and larger fields where there is a bias for faster ground on particular sides of the racecourse.

Fun Fact: You may often hear the phrase “thoroughbred racing”. This reasons to the thoroughbred bread of horse which is typically used in racing.

The next set of numbers details the recent form of the horse e.g 21-1161 to the left of Decorated Hero's name. Let's break those form numbers down.

Fairly obviously the horse's name is next but more important is the info that follows. The number in brackets immediately after the name indicates the number of days since its last race.

Then you may also see some of these abbreviations:

You may also see an abbreviation after a horse's name (e.g. IRE), this indicates where the horse was born if not in Great Britain.

Next up it's the horse's age, in Decorated Knight's case, it's 5 years old.

Then follows the weight which is displayed in imperial units of stones and lbs in Great Britain. You'll see that Decorated Knight's weight is 9st 0lbs.

The jockey's name is listed next. As well as looking for a horse in form, following a successful jockey or stable can be an effective way to begin your search for a winner.

Some racecards will display each horse's official BHA Rating. The BHA Handicappers allot ratings to horses once they have taken part in a sufficient number of races to enable the Handicappers to make a numerical assessment of each horse’s ability.

In this instance, this publication has its own rating system, with each horse's chances ranked out of 100. You can see Jack Hobbs is rated 99 and considered most likely to win.

Not all racecards will feature this kind of information but it's fairly self-explanatory and a handy reference to the background and career of each horse.

You'll always find these two pieces of info listed on a racecard. Identifying an in-form trainer or one that has a good record at a particular course can be a good way to pick a winner.

What does Nap mean?

In horse racing, NAP generally indicates the tipsters best bet of the day.

What does (AW) next to a racecourse name mean?

This refers to the type of racetrack. Known as All-Weather or AW, these types of tracks are Polytrack, Fibresand & Tapeta instead of turf. The most common AW racetrack in the UK is Kempton Park.

Here is an article explaining the difference.

Other things to look out for

Anything I've missed? If so let us all know in the comments section below.

Looking for a betting bonus or a place to watch live racing action? Check out the bookie bonuses and free bets section.

Racing tips: Nahaarr the Golden boy for Haggas at Ayr

Racing tips: Calliope to call the shots at Kelso