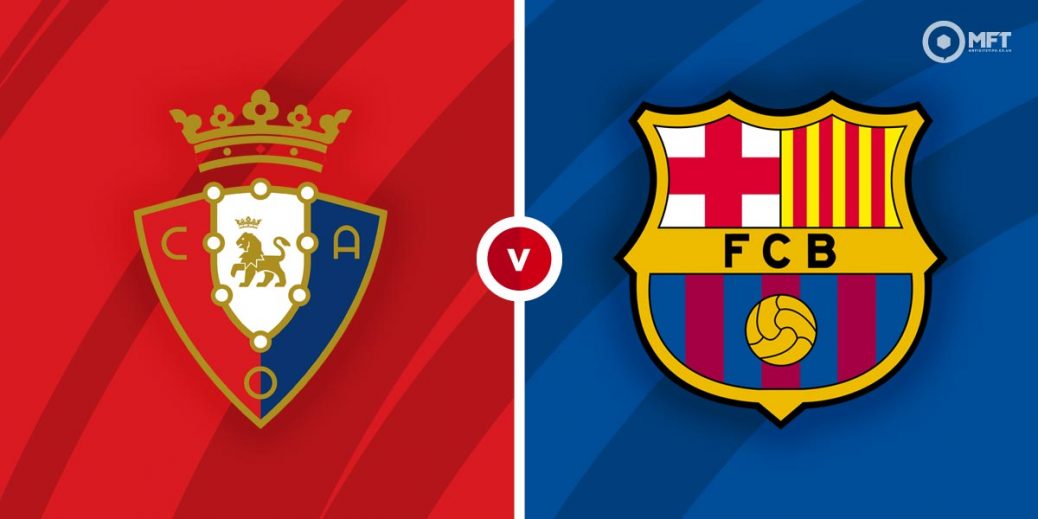 Barcelona will aim to stay in the title race when they travel to the Estadio El Sardar for a Spanish La Liga clash against Osasuna. Buoyed by back-to-back wins over Sevilla, they will be confident of getting past an Osasuna team sitting in the bottom half of the table.

The Catalans are likely to have a different outlook on their season now following back-to-back victories over Sevilla. They claimed a 2-0 La Liga win over the Andalusians last Saturday and followed that up with a 3-0 triumph in the Copa del Rey.

The midweek win against Sevilla means Ronald Koeman’s men have booked a place in the final of the Copa del Rey and have a genuine chance of claiming some silverware this season. They are also just five points off leaders Atletico Madrid and with the Madrid derby this weekend, could move even closer to the summit of La Liga.

Barcelona have momentum at the moment as they are unbeaten in their last 15 La Liga matches. They have also been solid on the road and travel to Osasuna off the back of seven straight away wins.

Osasuna were 1-0 winners over Alaves in their previous La Liga outing. Kike Barja's effort midway through the second half proved to be the difference in a closely fought contest.

The result put some daylight between Osasuna and the bottom three as they sit closer to the top half than the relegation zone. Jagoba Arrasate’s men have been poor at home with two wins from their last nine matches.

They were also beaten 2-0 by Sevilla in their last home fixture.

The bookies have installed Barcelona as the favourites here with novibet offering 16/25 for an away win. Osasuna are priced at 24/5 by SBK for a victory while a draw is set at odds of 33/10 by Unibet.

Given Barcelona’s recent record on the road in recent weeks, I am leaning towards an away win in this one.

Barcelona have the advantage in this fixture with 22 wins from 37 previous matches. Osasuna have claimed six victories while both teams have battled to nine draws.

Barcelona claimed a 4-0 victory in the reverse fixture back in November.

Ante Budimir is the biggest attacking threat for Osasuna with six goals this season. The Croatian attacker is priced at 3/1 by bet365 to score anytime while the first goal is valued at 10/1 by the same firm.

As always Lionel Messi will be the one to watch for Barcelona and the Argentine forward is priced at 77/100 by sporting Index to score anytime. French winger Ousmane Dembele has scored in his last two appearances and could be worth keeping an eye on in the same market at 3/2 with Unibet.

Goals are always a good bet when Barcelona are involved and could be worth a punt on Saturday. Over 2.5 goals is priced at 33/50 by SBK, who also value over 3.5 goals at 48/29 while Sport Nation is offering 14/19 on both teams to score.

With an away win priced at minimal odds, a score/win double involving Lionel Messi could provide some value with Skybet offering evens. The Argentine forward could also be backed to score two or more goals at 13/4 with Sporting Index.

A win/goal double could also be worth a punt with Boyle Sport pricing a Barcelona win and over 2.5 goals at 5/4.

This La Liga match between Osasuna and Barcelona will be played on Mar 6, 2021 and kick off at 20:00. Check below for our tipsters best Osasuna vs Barcelona prediction. You may also visit our dedicated betting previews section for the most up to date previews.