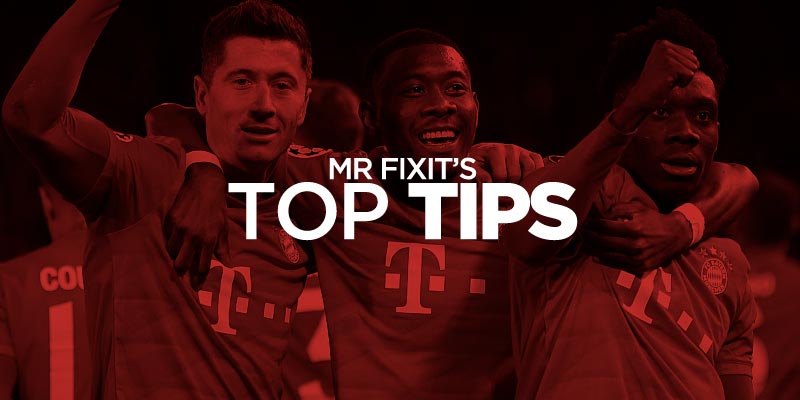 The Premier League, The Championship, Serie A, La Liga, the German Cup Final, The Oaks and The Derby – it's going to be a busy Saturday for us punters and that list is just scratching the surface!

So forget heading out to the newly-opened pubs in your England and get drunk on a day of fantastic sport on your TV.

The league title might be sewn up but there's still plenty to play for in the Premier League with Champions League, Europa League and relegation issues yet to be resolved.

Chelsea let plenty of punters down when they were beaten at West Ham on Wednesday but they'll still be on plenty of accas in Saturday night's live match on Sky Sports. That's one of seven match previews we have on the site offering detailed analysis and tips.

In Mr Fixit's enforced absence KevMac takes a look at the best bets in the Premier League and Championship in his post where he's banking on Man Utd to continue their rich vein of form at home to struggling Bournemouth.

Goals on the Menu in German Cup Final

The German Cup Final should be an entertaining affair, live on BT sport at 7.00pm. Bayer Leverkusen and Bayern Munich battle it out for the DFB Pokal but both will still have ambitions of adding European silveware to thir trophy cabinet before the season is out. If previous encounters are anything to go by Selectabet could be right in predicting a bit of a goalfest.

Those of you that tuned in to the Gambla Podcasts this week will already be counting your cash. Former Falkirk, Queen of the South and St Johnstone star David Weatherston joined Greg and Selectabet for a look ahead to the fixture in Norway this weekend.

David now plays in Norway and has been following the football closely. His expertise shone through as he scored FIVE winners out of five on the opening day of Norway's Division 1.

If you didn't catch that Podcast it's still worth a listen for David's other tips in Norway this weekend. You should also listen to the regular Podcast for additional tips from Greg and SlipsTips in Belarus, Italy, Spain and England.

You can find both Podcasts here.

Keep an eye out for Greg's tips over the weekend. He's got some picks lined up for what has been dubber Super Sunday in Belarus!

VIP Bet of the Day

Scott made it three wins out of four for VIP Members on Friday but there was a bit of a sweat on in the last 10 minutes. Ateltico Madrid powered in to a 3-0 lead with 10 minutes to go and the Bet of the Day (Atletico to win and Under 4 goals) looked in jeopardy but true thankfully that's how it finished.

On Saturday he's off to Serie A to add to his list of Bet of the Day winners this week.

Thommo scored a pair of winners at Hamilton on Friday with Shesadabber and Le Chiffre obliging at 5/6 and 6/4 respectively.

It's no surprise that Frankie's mount in The Derby, English King, headlines his pick for Saturday where he has five tips for the Espom meeting.

There'll be more thoughts on Saturday's racing from Voice of Value and Rizzel Tips posted later.

If you want to get involved in the racing for a small interest on Saturday then why not enter the WhoKnowsWin competition where you can play against other punters, not the bookie. Pick a horse in each of the live races on ITV and if you score the most winners you scoop the jackpot prize. Find out how to enter here.

Best of luck for your bets on Saturday!