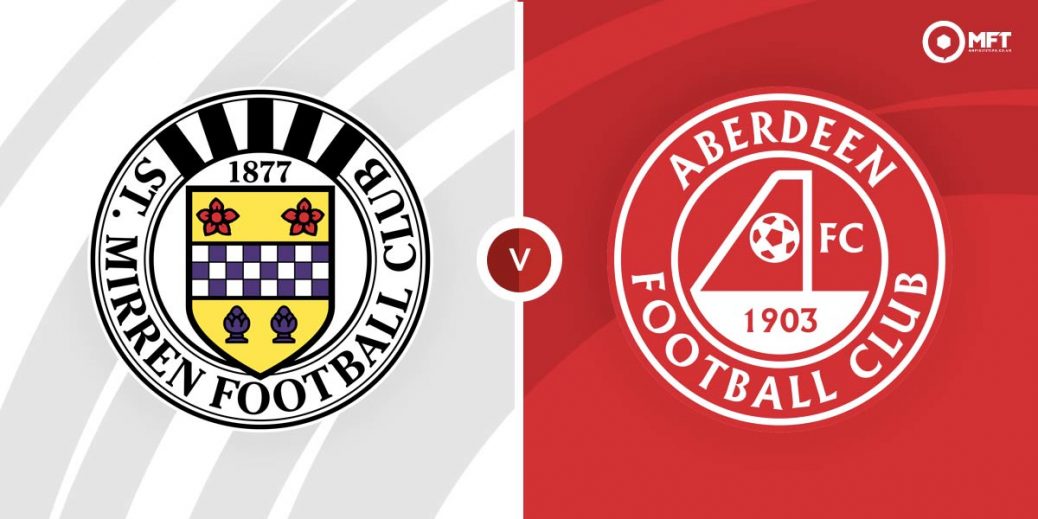 Saints are still waiting to claim their first three points of the season, having posted four draws and two losses across their opening six assignments.

It's not been a disastrous start to the campaign by any means for the Buddies but boss Jim Goodwin will be desperate to secure a maiden league triumph.

However, St Mirren never go down without a fight and they will head into this clash in good spirits after a last-gasp equaliser earned the Paisley outfit a point at Easter Road last Saturday.

Aberdeen, on the other hand, will be pretty demoralised after conceding a late winner against St Johnstone at Pittodrie last weekend.

That setback means the Dons are now winless in seven matches across all competitions and with that, the optimism surrounding Stephen Glass's side in the opening weeks of the campaign has somewhat evaporated.

St Mirren have drawn their last three league matches and another all square Saints affair pays 9/4 at SBK while the Buddies are 28/13 (SBK) with the same bookmaker to bank their first three points of the season.

Aberdeen have avoided defeat in 25 of their last 27 matches with St Mirren and the Granite City guests head south on Sunday as 19/13 (SBK) favourites.

It's difficult to have much faith in either team here so I'm going to steer clear of the outright betting and instead dip into the number of cards market.

Over 3.5 match cards at St Mirren Park on Sunday has been chalked up at 5/4 (UniBet) and that quote just looks a little too big to me.

Both sides will no doubt be desperate for a win given their underwhelming league positions and that should contribute to a closely-fought contest between the pair in Paisley.

As such, I'm anticipating a fiery midfield battle on Sunday lunchtime, with opposing middle of the park operators Alan Power and Scott Brown both possessing real combative streaks.

Over 3.5 cards has copped in each of Aberdeen's six Scottish Premiership matches this season, while the same bet has cashed in 4/6 Saints games, with each of those four games featuring a red card.

It's also worth noting that experienced Scottish referee Willie Collum will be the man in the middle at St Mirren Park, an appointment that had my eyes drawn to the card markets.

Collum has flashed four or more cards in three Premiership outings this term and he delivered four bookings for me in the Premier Sports Cup on Thursday night.

With all things considered, the 5/4 (UniBet) about over 3.5 cards makes plenty of appeal in what should be a hard-fought affair in front of the TV cameras on Sunday.

That train of thought is also going to see me chance a Sunday lunchtime long shot by combining Alan Power, Lewis Ferguson and Scott Brown in an anytime booking Bet Builder.

The aforementioned trio are no stranger to the referees notebook and with both teams bound to be right up for this one, I'll happily throw some loose change on what is a tasty looking 22/1 (Bet 365) treble.

This Scottish Premiership match between St Mirren and Aberdeen will be played on Sep 26, 2021 and kick off at 12:00. Check below for our tipsters best St Mirren vs Aberdeen prediction. You may also visit our dedicated betting previews section for the most up to date previews.