AJAX entertain Valencia on Tuesday night knowing that a point will be enough to send them into the last 16 of the Champions League.

The Amsterdam outfit currently sit top of Group H, however, they will be hosting a Valencia side who themselves can guarantee qualification to the knockout phase should they collect all three points in the Dutch capital.

Albert Celades side currently occupy second place in the section and they will enter the Johan Cruijjf Arena knowing that their Champions League fate is in their own hands.

Los Ches began their campaign with a 1-0 win in London – and another herculean effort away from home will be required against an Ajax team who motored to a 3-0 win in the reverse fixture inside the Mestalla on matchday two.

With all due to respect to basement boys Lille, Chelsea will be expected to chalk up three points in the groups other fixture, and if so, one of Ajax or Valencia will parachute into the Europa League as a consequence.

An away win for Valencia is an unfancied 4/1 (Betway ) however, there are certain permutations that could still see the visitors qualify even if the fail to claim all three points from their final group fixture.

Both sides experienced contrasting fortunes in the weekend leading up this showdown, with Ajax suffering a shock 2-0  defeat at this venue against Willem II on Friday night, meanwhile, Valencia racked up a 4-2 win whilst on the road at Levante.

Celades men have only lost one of their last 12 matches across all competitions and as such they will arrive in Amsterdam high in confidence.

What's more, Valencia have scored two or more goals in all but one of their last seven contests and given that the La Liga side will more than likely have to go for goals at some stage on Tuesday night, I like the look of the 5/6 (Bet 365) on offer for Valencia to hit the back of the net before the hour mark –  something they have achieved in their last four fixtures. 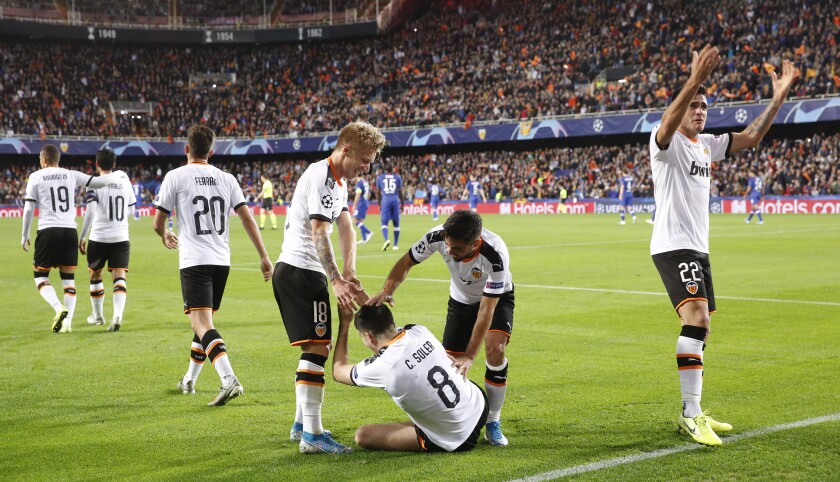 However, at the other end of the park Valencia are defensively vulnerable – the Spanish side have only picked up one clean sheet in their last 12 attempts – and that perhaps explains why there is no value in backing both teams to score at 1/2 (Ladbrokes)

Yet, Ten Hag's backline can hardly be described as watertight – Ajax have only secured two shut-outs in their last seven outings – and five of that sequence have seen over 2.5 match goals scored.

Six of Valencia's last seven have also seen three or more goals land and with that in mind I'm going to combine both teams to score and over 2.5 goals at an attractively priced at 4/5 (Bet 365)

Going for goals paid off for me in Valencia's last European run out- as did cards – and that's a market I'm going to revisit in this make-or-break Group H meeting.

There are several candidates to consider for a caution, however, the 16/5 (UniBet) on offer for combative midfielder Francis Coquelin to be carded appeals.

The Frenchman had a yellow flashed at him during Saturday's success over Levante – he has already been shown a red this term – and I fancy Coquelin to have his name taken when trying to tame Ajax's array of technically gifted attackers.

This UEFA Champions League match between Ajax and Valencia will be played on Dec 10, 2019 and kick off at 20:00. Check below for our tipsters best Ajax vs Valencia prediction. You may also visit our dedicated betting previews section for the most up to date previews.