THERE'S not an awful lot to dislike about the level-headed Anthony Joshua, especially considering he operates in the ruthlessly cynical, trash-talking world of heavyweight boxing. And on Saturday he'll have plenty of backing among the 90,000 fight fans who will pack out Wembley Stadium for an epic evening of boxing.

He comes across as humble, respectful and civilised; almost the antithesis to Britain's other current world champion Tyson Fury, who pulled every trick in the book to overcome Joshua's opponent Wladimir Klitschko 18 months ago. Fury rocked the boxing world when he took the fight the distance and deservedly won the decision in Düsseldorf.

That result triggered a contracted re-match with Fury but when that showpiece fight fell through the door was opened for Klitschko to go toe-to-toe with Britain's rising star and so we have an intriguing bout to look forward to. Can Klitschko roll back the years and reclaim a world title or will Joshua live up to his promise and defeat one the most-respected champions the heavyweight division has ever seen?

Joshua – A legend in the making?

Joshua's X-Factor-style back story makes for a good old bad-boy-done-good yarn. Eight years ago he was electronically tagged after some run-ins with the law, then in 2011 he escaped a prison sentence after being found in possession of eight ounces of cannabis. His 100 hours of community work perhaps gave him time to reflect on where his life was going. By 2012 it had come full circle and Joshua won Britain's last gold medal of a memorable Olympic Games in London. Joshua had finally left his past behind him and had the whole world in front of him.

Since winning on his professional debut in 2013 against Italian Emanuele Leo, Joshua has won every fight giving him an 18-0 record. 13 of those wins have come inside the first three rounds. An impressive record, but Klitschko presents a different challenge, one that may take Joshua the distance – something he's never done before.

Some fights can be career-defining for boxers, in Joshua's case this one will either propel him in to the stratosphere or put him back to square one.

There's no doubting Klitschko's class and that defeat to Fury must have hurt his pride more than anything. He's getting back in the ring on Saturday to rebuild his reputation but have we seen the best of the man they call Dr. Steelhammer? At 41 can he match the speed and power of Joshua? Does he still have it in him to deliver a devastating knock-out blow? And without a fight in 16 months will he have the stamina to last the distance against his younger opponent if required?

Let's not forget though that Wladimir has held all three world titles and has lost only four of his 68 professional fights, so he knows his way around a boxing ring. Fury found a way to suppress, cajole and manipulate Klitschko, will the Ukrainian allow Joshua to do the same? Klitschko will need to use all his 41 years of experience otherwise he could be facing a second successive defeat for the first time in his career.

Tale of the Tape 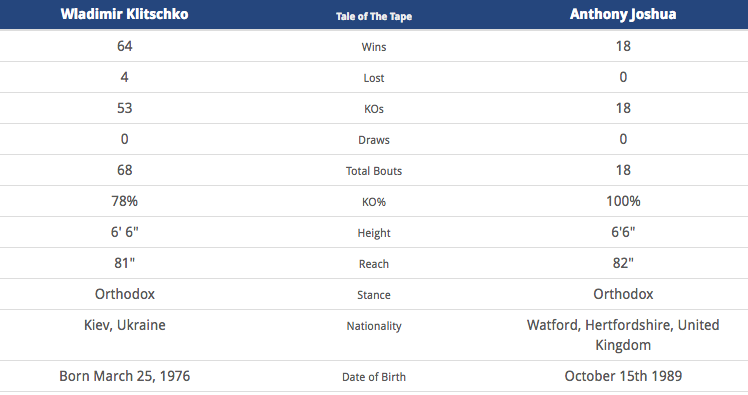 The bookies are all over Joshua and the best price at the time of writing is around 1/3 (Netbet, 10Bet). Klitschko can be backed at 23/10 with Marathonbet whilst the draw is available at 40/1 with Paddy Power.

Bookies Coral have reported that 70% of bets taken in the method of victory market have been for the British boxer to stop Klitschko inside the 12 rounds. Joshua to win by KO, TKO or disqualification is short at just 4/6 (betfair) with the same firm going 4/1 that Klitschko will win by one of the aforementioned outcomes. But if the fight goes the distance there's little to chose between the two; Joshhua is 6/1 (Skybet) to win by decision or technical decision whilst Klitschko is 7/1 (Bet365, Boylesports).

With over a million people expected to tune to Sky Box Office to watch the fight it's no wonder bookies are putting out all kinds of tempting offers for punters to get involved. Here are some of the best;

As far as betting on the fight goes, I can't see past Joshua. His star is on the rise whereas Klitschko has surely had his day in the sun. But I can't be backing the man from Watford at just 1/3. I'm sure Klitschko will prove there still some fight left in the old dog yet but for my money he won't outscore the quicker and more energetic Joshua if it goes the distance.

Whilst most of the money has been on the Brit to stop Klitschko, 6/1 on Joshua to win it on a decision makes the most appeal especially when you consider that it's just 21/10 (Netbet) to go the distance. I'll also have a little stake on Joshua to win it in the 10th at 20/1 (Skybet) for a little long-shot interest in the fight.

Let's hear how you think the fight will go in the comments section below.