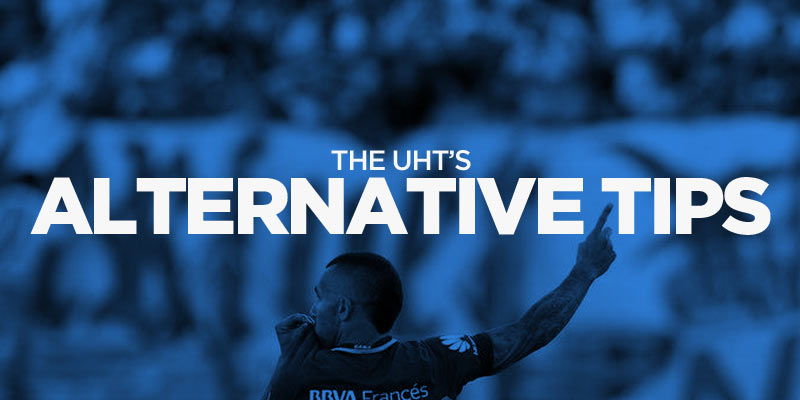 I’M putting this one up a little earlier as my last two posts were winners but a little late to the party – my fault – and I’m going for a fourfold in this bet.

And if I may address the small posse of friends who have shared such positive thoughts recently, I hope you will go with the four picks on Monday night in order to pull in the higher reward.

Of course, we need them all to come in to make the bet a winner.  (We have covered some degree of uncertainty with a DNB in Brazil later.  It may be the bet is down by then, but the Argentina treble looks fairly solid meantime).

I’ve only added the Brazilian line to pep this up a bit.  But I myself will be going for all four. I hope some go with me!

Although I started off with Unders in mind – and I wouldn’t want to put anyone off, as, in four home games, Sacachispas have only scored 4 and conceded 3 for a total goals count of 7 – the more I look at the stats, the more I feel drawn to a home win. (Unders is 19-40, and on the stats so far this season looks nailed-on, but last season in this league, Sacachispas were the most unreliable/worst home side for Unders with 11 over and 6 under, and note that all of their last five home regular season games were over, so, they’re… capricious!).

So I like the home win and, in terms of the home win, they’re looking a pretty good shout.  Not so much because they are particularly noteworthy as a winning prospect, but because Talleres look particularly bad.

Sacachispas are currently 9th overall in the league, and Talleres are bottom (of 20).

I’m not overly impressed by Sacachispas’s one home defeat – 0-2 against Defensores Unidos, whose only away win this season it was.  I wanted the defeat to be against the best away team in this league, which Defensores certainly are not, but Defensores were promoted champions of Primera C last season, so, they have something positive about them.

More significant, though, Talleres overall haven’t won anywhere since the start of the season, and they had seven defeats following that one away win.  In their one game since the run of seven losses, at home, they managed a 0-0 to mid-table Fenix.

But here’s the big one for me.  They scored their two away goals in August, and they haven’t actually scored ANYWHERE home or away since then.

Last season, Sacachispas won home and away against Talleres 1-0.  Season before Sacachispas were in Primera C (which they won).

Though I expect the Unders to come in, I think the home win is worth the additional risk!

It can only be an Under 2.5 match goals recommendation.

This doesn’t mean it will definitely come in, but we can’t look at the stats and see anything else (Unless we are concerned by H2H from last season.)

San Telmo home are the third best Unders side in this league.  They’ve played 5.  They are over in none, and under in five.  They’ve scored 4 goals and conceded 3.

Sometimes you have to scratch your head when you compare these leagues with, say, Holland or Iceland!  Are they playing the same sport?  (Apparently, they are!)

Away, Deportivo have played 4.  They’ve scored 0 and conceded 5.  Amazingly, one of those games was Over 2.5 goals – a 3-0 whacking by top of the league Deportiva Riestra.

Ideally, I’d suggest BTTS – No.  However, that option is not available anywhere, which I would definitely go for otherwise, but I’m happy with Under 2.5 goals.

I say ‘happy’. There’s a slight tug at my attention as last season, the encounters went 2-1 with San Telmo at home and 3-1 with Deportivo at home, but we only have the evidence before us for this season, and I am happy to overlook that history based on the current trends.

Sadly, so are the bookies.

One of the attractions of the Argentine leagues for me originally – other than nobody else caring less about them on Mr Fixits Tips, which immediately means the bookies aren’t so hot on them either – was some of the names, and Chaco For Ever in the regional league of Argentina remains a joy.  I won’t bore you with the details of their formation in 1913, and I guess, to be honest, I don’t really care about forever as long as they deliver on Monday.

Chaco For Ever have played two games at home, both Under, and they’re F1 A0 (goals)

Sarmiento Resistencia have played two games away, both Under, and they’re F0  A1 (goals)

If we look at last season, and the home and away games of each:

They played three times last season in this league, and five times the season before, and whilst only three of these games were with Chaco at home, all eight were Under 2.5 goals.

Famous last words perhaps, but there’s not a lot to suggest we will see goals goals goals on Monday.

I started looking at this one originally because I was looking at a treble based around three odds-on Unders bets from Argentina, and I thought it’s always good to get something a bit tastier in there if possible.

Who knows?  You could already be looking at three losers by the time this is up, but I like this a lot!

Again, it’s more because the away stats are bad, rather than because Ceara are anything special at home.

We can also note they have conceded in each of their last 10 away games.  They’ve only scored in 4 of those games.

We know Ceara are on a good run at home.  They’ve won their last three.  That’s pretty good considering they’ve only won five all season at home.  Plus, at home, they’ve only lost four of fourteen.  Goalswise, they’re F14  A14.

They’ve only beaten 12th, 13th and 19th best away sides in these last three games, but you can only beat what’s in front of you – and they have!  Botofago are 11th best away in this league.

I am happy to take the gamble here to up the reward.