THANKS A MILLION! – One Million Comments Milestone Reached!

Home THANKS A MILLION! – One Million Comments Milestone Reached! 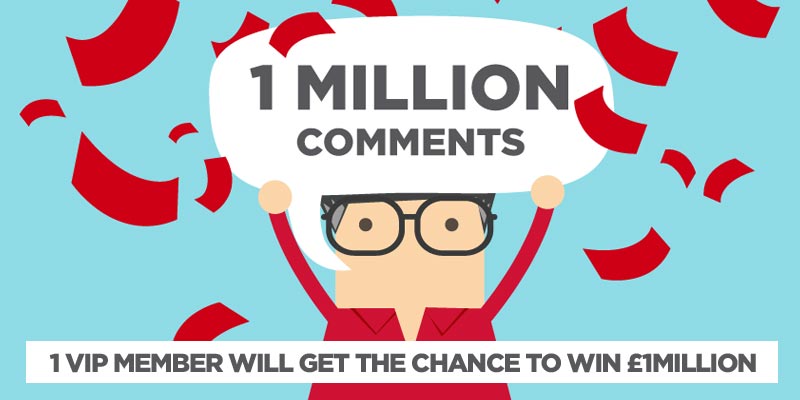 YESTERDAY we reached an incredible milestone on MrFixitsTips when we passed the ONE MILLION mark for comments on the site.

Back in the summer of 2010 I made the first post on the site, announcing the site would launch later that year. Since then you have come in your hundreds of thousands and made this one of the best betting community sites on the internet and for that I am truly grateful.

So a huge thank you to everyone that's posted a bet, thanked another member, asked a question or entered a competition. Reaching a million comments is way beyond any expectation I had almost a decade ago.

To celebrate the milestone I'm going to give one VIP Member the chance to win £1 MILLION!

I've posted all the details here but essentially I'll put up a £200 bet at odds of around 5000/1, meaning one lucky VIP Member could scoop a life-changing amount of money.

The actual bet will be decided upon by our team of tipsters including myself, Greg, Desmond, Thommo, Scott Allot, KevMac and SlipsTips on December 14, so you'll have the benefit of not just one great betting mind but SIX!

The winner will be selected on December 20, so if you're already a VIP Member make sure you don't miss out by heading on over to claim your place in the draw.

If you're not already a VIP then the chance to win £1 million is as good a reason as any to join us for less than 10p per day.

Lastly, one final thank you to everyone for all the comments once again. Here's to the next MILLION!