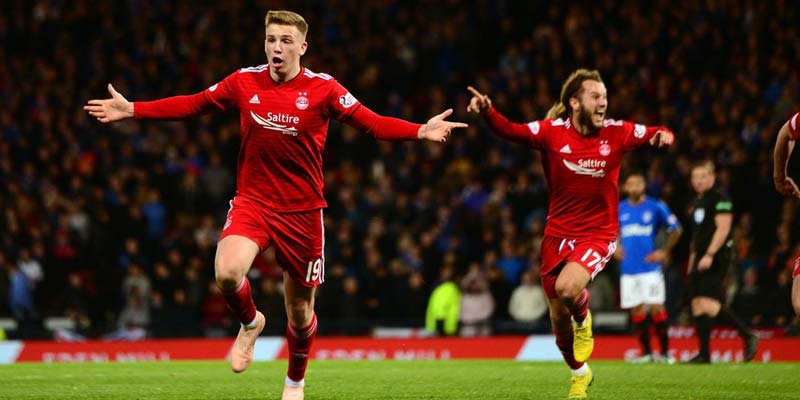 ST MIRREN'S number looks up and when they play Aberdeen that number is usually four for forlorn.

The Dons have won three meetings this season including 4-0 and 4-1 home victories. In fact they've netted four in the past three against the Buddies at Pittodrie and to score 4+ again are 9-2 with Coral although -3 pays much bigger at 7-1 with 888sport.

Those are speculative bets but Saints have lost five in a row and looked doomed so Dons to win at 1-3 with McBookie is fine on accas and I like the look of -1 at evens with McBookie.

Derek McInnes's men have netted 12 in four including that favourite number against QoS last week in the Cup.

Sam Cosgrove has turned into their main man with 14 goals in 13 games including doubles in his last two outings.

There's a possibility of four home wins in the Premiership today and that pays 37-10 at Betfred.

Rangers missed Alfredo Morelos last week and have a striker crisis against St Johnstone. The Colombian is banned and Jermain Defoe and Kyle Lafferty are doubts so Steven Gerrard has recalled Dapo Medube from Scotland Unde-19 duty.

Saints' confidence has been rocked by a run of five defeats, albeit three were against Celtic, and they've netted just once in that spell.

Tommy Wright's men hardly laid a glove on the champions as they crashed 5-0 in the Scottish Cup but prior to their recent run had been tough to score against and if Defoe and Lafferty fail to recover they could be worth a look not to lose.

Having been awarded six penalties in three games James Tavernier, who netted three and missed two, could be the best bet to score first at 8-1 with Unibet if none of the strikers make it. Gers are 3-1 with Paddy Power to get a spot-kick.

Hibs won two and lost two under caretaker boss Eddie May but have Paul Heckingbottom in the hotseat after No.1 pick Michael Appleton couldn't agree a deal. They should win again when Hamilton visit having beaten them 6-0 at Easter Road back in October but a best bet of 5-11 at 188BET is a bit skinny.

Livingston haven't netted in five games, losing four and drawing 0-0 at Hearts, and they'll be desperate to get back on track at home to Dundee. This was 4-0 at the Tony Macaroni in October but again Livi look a little short at 17-20 with Betfred.

Tomorrow Celtic travel to a Killie side who have made it tough for the Old Firm at home. Celts could be leggy after facing Valencia on Thursday and best bet is Killie +2 at 3-5 with Betway.

In the Championship it's hotting up with Dundee United closing in on the top two. Robbie Neilson's men are title favourites in may punters' eyes and face a big test at QoS … Stephen Dobbie et al.

Queens raise their game for better sides and 28-goal Dobbie will have to watched after another cracking goal at Aberdeen. The last six meetings at Palmertson have gone over 2.5 goals so maybe that's the way to go at evens with McBookie.

Partick Thistle are back at the bottom despite a six-match unbeaten run. They're out to leapfrog Alloa and are 7-5 at sportingbet to do so.

Last week's Super Single was Forfar and bookies are again underestimating them with Marathonbet offering 19-10 at Montrose. Forfar are level on points with Raith in second and you can't take less risk with Forfar draw no bet at 23-20.

Raith look a little big at leaders Arbroath, who were held at home to Stranraer in midweek, with Marathonbet going 6-4.

Clyde are the form side in League Two and should cover the -1 handicap at home to Albion Rovers but it's just 7-10 at Betway.