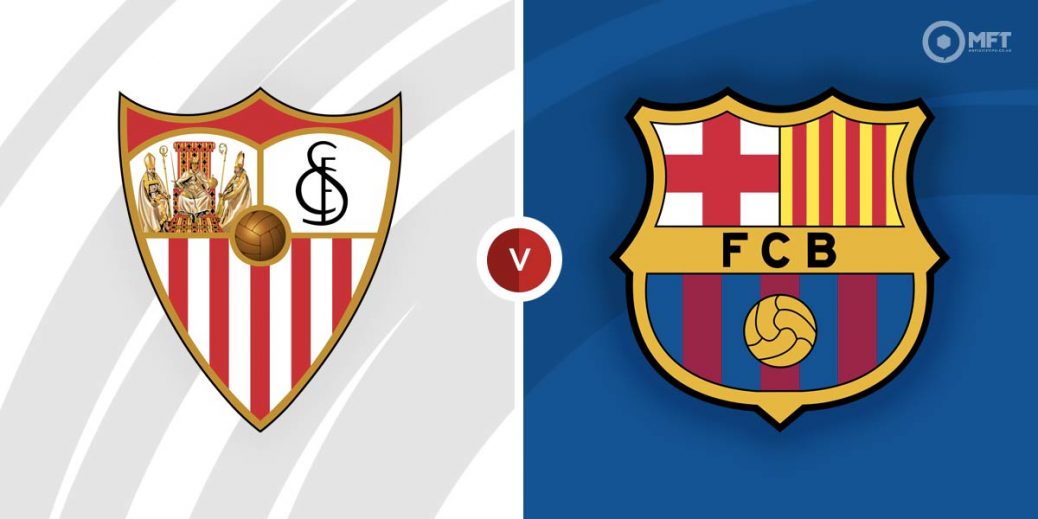 Barcelona travel to in-form Sevilla for their final La Liga fixture of 2021 as they look to close out the year on a positive note.
Sevilla have plenty of reasons to be satisfied with their performance in the first half of the season and will be keen to close out the year on a high. Sitting second on the standings, they are currently leading the group of clubs chasing runaway leaders Real Madrid.

Julen Lopetegui’s men are playing with plenty of confidence in recent weeks and head into Tuesday’s clash with just one defeat from their last 10 La Liga matches. They are currently on a three-match winning run and claimed a 2-1 victory over Atletico Madrid in their previous fixture.

Sevilla have been almost unstoppable at the Estadio Ramon Sanchez Pizjuan, where they are unbeaten this season. They have claimed seven wins and a draw from their eight home matches, a run that includes a 1-0 victory over Villarreal prior to the win against Atletico Madrid.

Barcelona picked up a 3-2 win over Elche last time out in La Liga. After throwing away an early two goal lead, they needed a late effort from substitute Nico Gonzalez to seal the win.

That was the first win in five matches across all competitions for Barcelona, who are still trying to find their feet under new manager Xavi. The Catalans remain seventh on the table, just outside the European places.

One of the problems for Barcelona this season is their poor form on their travels having claimed just one La Liga win away from home this season. They played out a 2-2 draw at Osasuna in their previous league fixture on the road but have already lost at Atletico Madrid and Rayo Vallecano this season.

Sevilla have the edge among the bookies at 32/21 with SBK while a victory for Barcelona is priced at 2/1 by betfair. A draw is set at odds of 41/17 by Vbet.

Barcelona have a 41-13 advantage with 13 draws from 67 previous matches against Sevilla. Both teams met four times last season in the league and Cup with the Catalans claiming two wins and a draw while Sevilla claimed a 2-0 home victory in the Copa Del Rey.

Lucas Ocampos and Rafa Mir have impressed for Sevilla lately with both men getting among the goals in recent matches. They have combined for nine goals already this season and can ensure the hosts continue their run of scoring in every home match this season at 2/7 with Vbet.

Top scorer Memphis Depay remains sidelined with injury but the youngsters have come to the party for Barcelona in recent weeks. The likes of Nico Gonzalez and Abdessamad Ezzalzouli have been among the goals lately and can ensure Barcelona find the net on Tuesday at 7/20 with Vbet.

Sevilla and Barcelona have shown some attacking quality in recent weeks and both teams could be backed to score at 5/6 with Vbet. Over 2.5 goals can also be considered at 21/20 with BetVictor.

There have been more goals after the break in the last two meetings between Sevilla and Barcelona so the second half can be tipped as the highest scoring half at 11/10 with Paddy Power.

This La Liga match between Sevilla and Barcelona will be played on Dec 21, 2021 and kick off at 20:30. Check below for our tipsters best Sevilla vs Barcelona prediction. You may also visit our dedicated betting previews section for the most up to date previews.