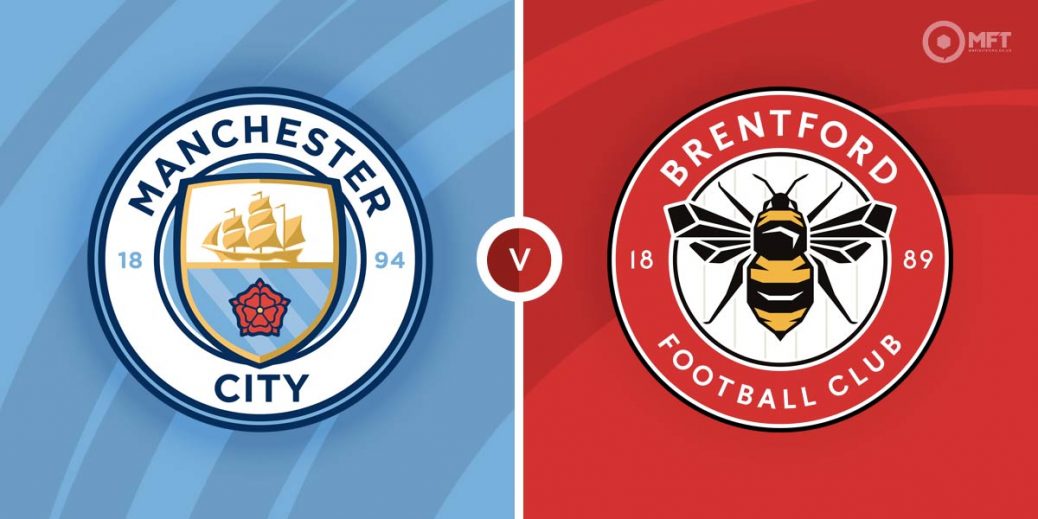 A one-sided contest could be on the cards as Manchester City welcome Brentford to Etihad Stadium in the Premier League on Wednesday. Both teams are challenging on opposite ends of the table and City are expected to claim a comfortable victory here.

Manchester City continue to set the pace in the EPL and look well on course for a successful defence of their title. They are nine points clear at the top of the standings and last suffered defeat in any competition back in early December.

The Citizens stumbled a little in their previous Premier League fixture as they were held to a 1-1 draw at Fulham. However, Pep Guardiola’s men made amends in the FA Cup, claiming a 4-1 victory over Fulham last Saturday.

The win over Fulham is typical of Manchester City’s recent home form as they have claimed a number of one-sided results at the Etihad. Among which is a 7-0 victory over Leeds United while they also picked up a 6-3 win over Leicester City.

Brentford are a long way away from their early season form that saw them ruffle a few feathers in the Premier League. They are now just eight points above the relegation zone and have lost their last five matches across all competitions.

Thomas Frank’s men travel to the Etihad off the back of a 4-1 defeat to Everton in the FA Cup fourth round last Saturday. They were also beaten 2-1 at home by Wolverhampton Wanderers in their previous Premier League fixture.

Brentford have suffered some of their heaviest defeats on the road in recent weeks. Prior to the FA Cup loss at Everton, they were beaten 3-0 by Liverpool while also falling 4-1 at Southampton.

The bookies have Manchester City as overwhelming favourites at 2/17 with 10bet while an unlikely victory for Brentford is valued at 28/1 by SpreadEX. A draw is set at odds of 21/2 by SBK.

Manchester City claimed a 1-0 victory in the reverse fixture back in December with Phil Foden’s early effort proving to be the difference.

Riyad Mahrez returned from international duty with a brace in Manchester City’s win over Fulham and could be worth keeping an eye on. The winger also has four goals in his last five Premier League matches and is priced at 59/50 by Unibet to get on the score sheet.

Ivan Toney remains the biggest attacking threat for Brentford and will be looking to add to his six Premier League goals. Unibet has the striker at odds of 5/1 to score anytime at the Etihad.

Manchester City have claimed a string of comfortable home results lately and could be tipped in the -2 handicap market at evens with Paddy Power. They have produced over 3.5 goals in three of their last four home matches and a repeat is priced at 22/23 by Vbet.

The Citizens are also likely to win both halves at 19/20 with William Hill.

This English Premier League match between Manchester City and Brentford will be played on Feb 9, 2022 and kick off at 19:45. Check below for our tipsters best Manchester City vs Brentford prediction. You may also visit our dedicated betting previews section for the most up to date previews.