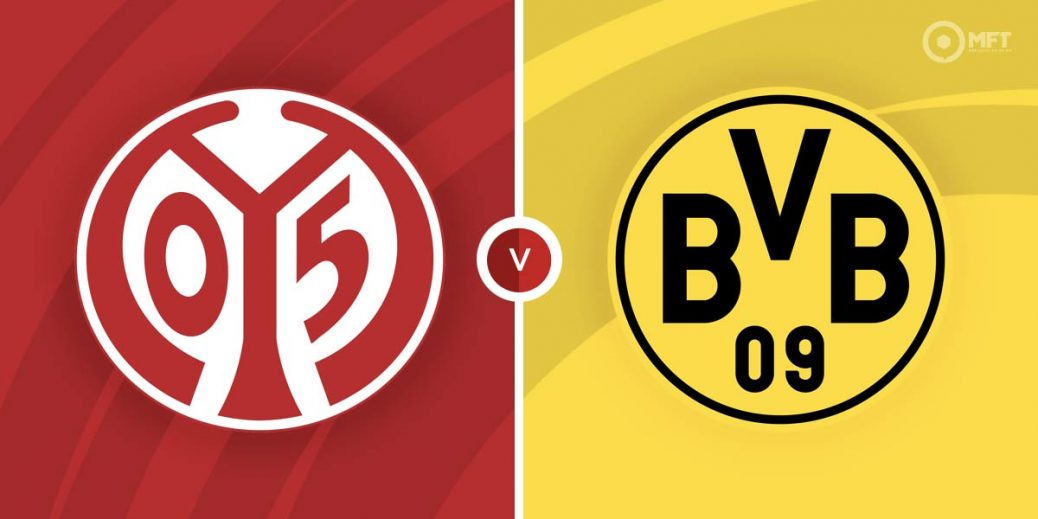 Borussia Dortmund will be keen to avoid losing further ground on leaders Bayern Munich as they travel to Mainz on Sunday in the Bundesliga. Mainz are often dangerous at home but Dortmund tend to do well in this fixture and their experience should get them over the line.

Sitting just six points off the top six, Mainz are still in the mix for a European finish. Their recent form has been slightly erratic having claimed just three wins from their last 10 matches across all competitions.

Mainz are coming off a 3-1 defeat at Union Berlin in their previous Bundesliga fixture. They were second best throughout the encounter and went three goals behind before Delano Burgzorg struck a consolation in injury time.

One positive for Mainz is their solid home record which has seen them win their last five Bundesliga matches at MEWA Arena. However, they are currently dealing with an extensive COVID-19 outbreak in the squad and could be depleted for Sunday’s clash.

Borussia Dortmund were held to a 1-1 draw at Augsburg last time out in the Bundesliga with Thorgan Hazard’s effort cancelled out by the hosts. That result has seen them lose ground in the title race and are now eight points behind leaders Bayern Munich.

It has been a rough couple of weeks for Dortmund, who have also crashed out of the Europa League. They travel to Mainz with just one win from their last four matches across all competitions, although that victory was an impressive 6-0 thumping of Borussia Monchengladbach.

Borussia Dortmund have shown some quality on their recent travels and are unbeaten in their last four Bundesliga away matches. Marco Rose’s men have claimed three wins in that run, including back-to-back 3-2 victories over Eintracht Frankfurt and Hoffenheim.

The bookies have Dortmund as favourites with an away win priced at 8/11 by betfair. A victory for Mainz is valued at 4/1 by Quinnbet while a draw is set at odds of 17/5 by Unibet.

Borussia Dortmund have won the last two meetings against Mainz and claimed a 3-1 victory in the reverse fixture with Marco Reus getting the opener. They also ran out 3-1 winners on their last visit to the MEWA Arena with Reus once again on target.

Jonathan Burkhardt should lead the line for Mainz and is their leading scorer this season with seven Bundesliga goals. SpreadEX has the striker at odds of 3/1 to get on the score sheet on Sunday.

Erling Haaland remains sidelined with injury but Marco Reus has stepped up in the striker’s absence with five goals in his last four Bundesliga matches. The forward has also found the net in his last two matches against Mainz and is priced at 9/4 by Sport Nation to maintain his scoring run.

Even without Haaland, Dortmund have still have good quality upfront and with both teams producing over 3.5 goals in their last two meetings, a similar outcome could be considered at 9/5 with BetVictor. Over 2.5 goals is valued at 9/13 with SBK while betway is offering odds of 7/10 on both teams to score.

This German Bundesliga match between Mainz and Borussia Dortmund will be played on Mar 6, 2022 and kick off at 14:30. Check below for our tipsters best Mainz vs Borussia Dortmund prediction. You may also visit our dedicated betting previews section for the most up to date previews.