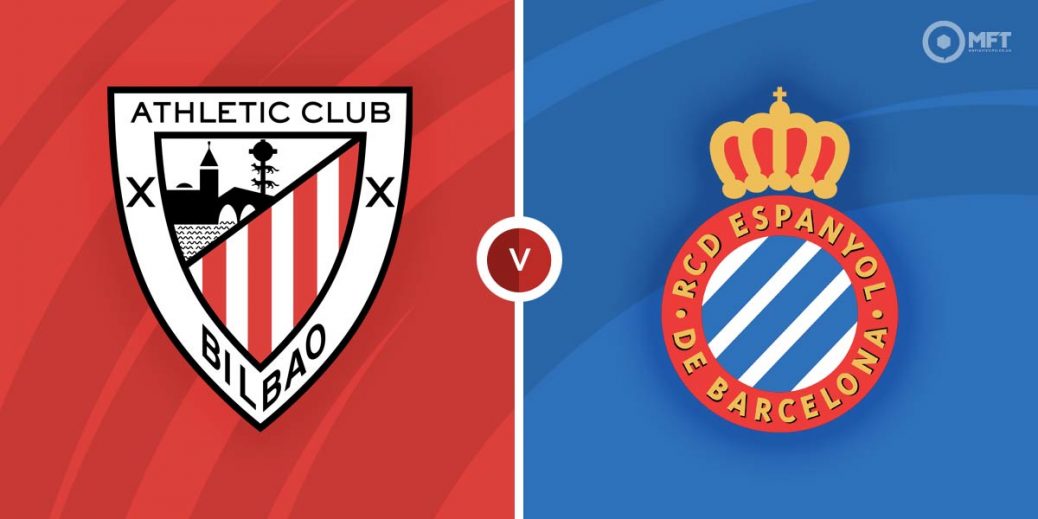 Athletic Bilbao will aim to keep alive their hopes of a European finish as they host Espanyol in a Monday night Spanish La Liga fixture. The hosts are in good form and should have too much for the out of sorts Catalans.

Athletic Bilbao will head into Monday’s clash brimming with confidence after knocking Real Madrid out of the Copa Del Rey on Thursday. They claimed a 1-0 victory over the La Liga leaders with Alex Berenguer’s effort one minute from time proving to be the difference.

That result is an extension of their recent La Liga form as Athletic Bilbao have suffered just one defeat in their last five league matches. They claimed a 1-0 victory at Rayo Vallecano in their previous league fixture and are now just three points off sixth place Real Sociedad in the race for European football.

Athletic Bilbao have not been convincing at home lately but will take confidence from a recent 3-2 La Liga victory over third placed Real Betis at San Mames. Marcelino’s men often struggle defensively in front of their fans and are without a clean sheet in their last six home matches.

Espanyol travel to Bilbao off the back of a disappointing 4-1 home defeat to Real Betis. They took an early lead through Raul de Tomas but went on to concede four times before the goalscorer was sent off late in the contest.

That result means Espanyol are now winless in their last four matches across all competitions, suffering three defeats in that run. The Catalans are still in the bottom half of the table but are not in present danger of getting dragged into the relegation zone as they sit nine points above the bottom three.

Things are even worse for Espanyol on their travels were they have claimed just one away win all season. Vincente Moreno’s men are also without a clean sheet in their last seven La Liga matches, conceding eight goals in the last three.

The bookies have Athletic Bilbao as overwhelming favourites with a home win priced at 8/13 by 10bet. A victory for Espanyol is valued at 11/2 with betfair while a draw is set at odds of 5/1 with SBK.

Espanyol have a 22-15 advantage with 20 draws from 57 previous matches against Athletic Bilbao. Three of the last four clashes have ended in draws, including a 1-1 scoreline in the reverse fixture but Bilbao ran out 3-0 winners in the last meeting at San Mames back in 2019.

Inaki Williams will carry the attacking threat for Athletic Bilbao and was on target in the reverse fixture. Paddy Power has the striker at odds of 17/10 to find the net in Monday.

Espanyol will be without suspended top scorer Raul de Tomas, so Javier Puado will be the one to watch on Monday. The forward has three goals in his last six La Liga matches and is priced at 4/1 by betfair to get on the score sheet.

Athletic Bilbao and Espanyol have both been on target in three of their last four meetings and could be set for a repeat at 11/10 with SBK. There have been over 3.5 goals in Espanyol’s last two matches and a similar outcome is priced at 14/5 with Sport Nation while over 2.5 goals is valued at 11/10 with BetVictor.

A win and over 2.5 goals could also be on the cards for Athletic Bilbao at odds of 17/10 with BoyleSports.

This La Liga match between Athletic Bilbao and Espanyol will be played on Feb 7, 2022 and kick off at 20:00. Check below for our tipsters best Athletic Bilbao vs Espanyol prediction. You may also visit our dedicated betting previews section for the most up to date previews.