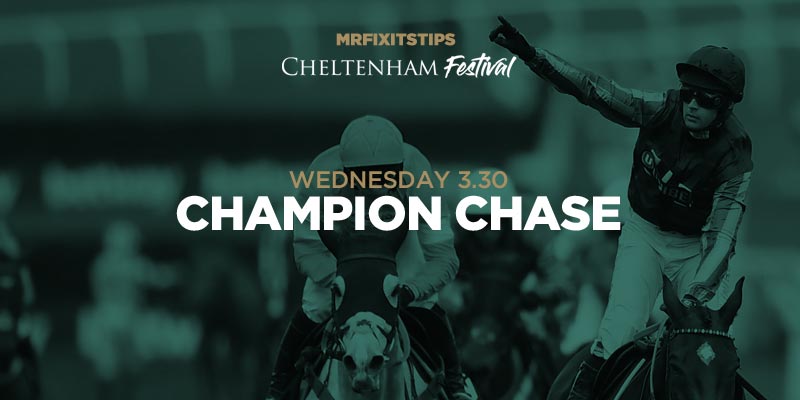 The Queen Mother Champion Chase is the feature race on Day Two of the Cheltenham Festival,  and is a Grade 1 chase run officially over almost two miles (1 mile, 7 furlongs and 199 yards).

UNFORTUNATELY we're in a bit of a quandary with this race at the moment given the uncertain involvement of Altior.

There are concerns over an old foot injury for him but hopefully he will still make it.

The reigning champ has won the last two renewals and although this looks like a better quality race this year he remains by far the most likely winner for me.

There will be many Defi De Seuil fans and that's understandable given his performances over the last couple of years but ALTIOR is just different class.  The way he responds when Nico De Boinville asks him for an effort on the run in is just magnificent.

If he is fit and well on Wednesday morning I think they will let him take his chance and then we will all see history in the making as he flies up the hill for his third consecutive Champion chase win.

If you back him now and he doesn't run you'll get your money back so in my view the 3-1 that is widely available is excellent value.

DEFI DU SEUIL has been one of the McManus flagship horses this season and his trademark power-packed finish can see him edge out Chacun Pour Soi in the Queen Mother Champion Chase.

Defi Du Seuil was too strong up the hill for Lostintranslation in last year’s JLT Novices’ Chase and is fancied to avenge his Punchestown defeat at the hands of Chacum Pour Soi when the track was riding quick last spring.

With the recent withdrawal of Altior, this race isn’t as hyped as it was previously. Before Altior was withdrawn, I probably fancied him to win it, but now I’m siding with DEFI DU SEUIL.

This year he’s been a total revelation over 2m, and has looked better and better with each run. Last year his form wasn’t shabby either, he won the JLT at Cheltenham, and had close form with Lostintranslation, who is running in the Gold Cup on Friday with a good chance.

But this season he’s took his form to a new level, especially last time out where he easily dealth with Un De Sceaux.

Chacun Pour Soi did beat Defi last year, but I think Defi has improved since then and back at Cheltenham he must be the one they have to beat.

Chacun has never raced at Cheltenham, and his form hasn’t been that great. He’s beaten Min, who looks more of a 2m 4f horse, and he finished 2nd to A Plus Tard, who is also a 2m 4f horse, so it doesn’t quite stack up when compared to Defi’s form.

The rest of the outsiders have it all to do, with arguably Dynamite Dollars finishing third behind the two main fancies, as he ran a nice race on return, finishing behind Altior.

Picking US Open winner Bryson DeChambeau was the key for the winner of my competition this weekend.

Mr Fixit's popular fantasy golf competition is back for the US Open. Pick three players. Lowest aggregate score wins the top prize. There's £100 to be won and it's completely free to play. Get in!