The Boodles Juvenile Handicap Hurdle is a Grade 3 National Hunt hurdle, open to horses aged four years only and run over a distance of about 2 miles and half a furlong. 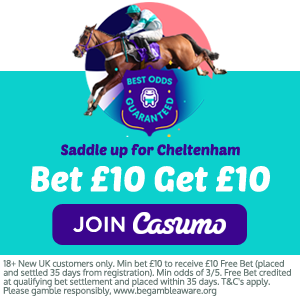 This is a race that I haven't found a great angle into so far.

There has been a lot of talk about a variety of contenders here in recent weeks but there aren't any that jump out at me for a potential bet and some of them look very short in the betting to me for a 24 runner handicap.

I thought that Jim Delhunt made a good case for ZOFFANIEN on our Gambla Cheltenham Preview Podcast so I will have a small each way on that one.

He looks consistent and is a much bigger price than some of the ‘talking horses' at the top of the market.

Richard Johnson takes the ride which can only be a good thing.

Betfair, Paddy Power and SkyBet are all paying 6 places each way and are top price so that is the way to go for me.

Traditionally, the Boodles Juvenile Handicap Hurdle is one of the week’s major head-scratchers but there may be a stand-out performer this season.

The Irish have won the last two renewals and the Willie Mullins-trained SAINT SAM may have a few pounds in hand.

A dual winner in France, the gelding possibly hasn’t been seen to best effect in tactically-run affairs in Ireland. He was put in his place by Zanahiyr at Fairyhouse and then didn’t see much daylight buried on the inside before staying on stoutly at Leopardstown on Boxing Day.

In contrast, he was sent to the front in the Spring Juvenile Hurdle, only to be cut down by talented Quilixios, and a big field/strong gallop may bring out the best in him wearing a first-time hood.

Busselton has twice been placed at Leopardstown, also behind Quilixios and Zanahiyr respectively, and Joseph O’Brien declares cheekpieces in a bid to eke out a little improvement.

Paul Nicholls has a smart ex-French recruit in Houx Gris, third on UK debut behind Adagio and Nasalam at Chepstow in early January. He could have slipped in here off an enticing handicap mark.

He doesn’t have much, if anything, in hand of Sage Advice on Warwick form and both should give a good account.