#WoodworkGate: When Bookies Get It Wrong

Home #WoodworkGate: When Bookies Get It Wrong

BARCELONA'S comeback last night was pure theatre but it wasn't the most astonishing thing that happened in the eyes of thousands of punters on social media.

Sergi Roberto's dramatic last-minute strike sent the Nou Camp in to raptures and was cause for punters up and down the country who had backed Barca to qualify to jump for joy. None more so than the guy who pocketed £9000 having staked two grand on Luis Enrique's side to go through at 9-2 in-play.

But it was shortly after the final whistle that the real story, from a betting point of view, emerged. Punter @DavidReid_88 had taken to Twitter pre-match to request a “Price It Up” bet from BetVictor. It all seemed pretty straightforward and BetVictor gladly obliged with odds of 125-1 on a combination bet of Messi to score a penalty, Cavani to hit the woodwork and Barca to qualify. 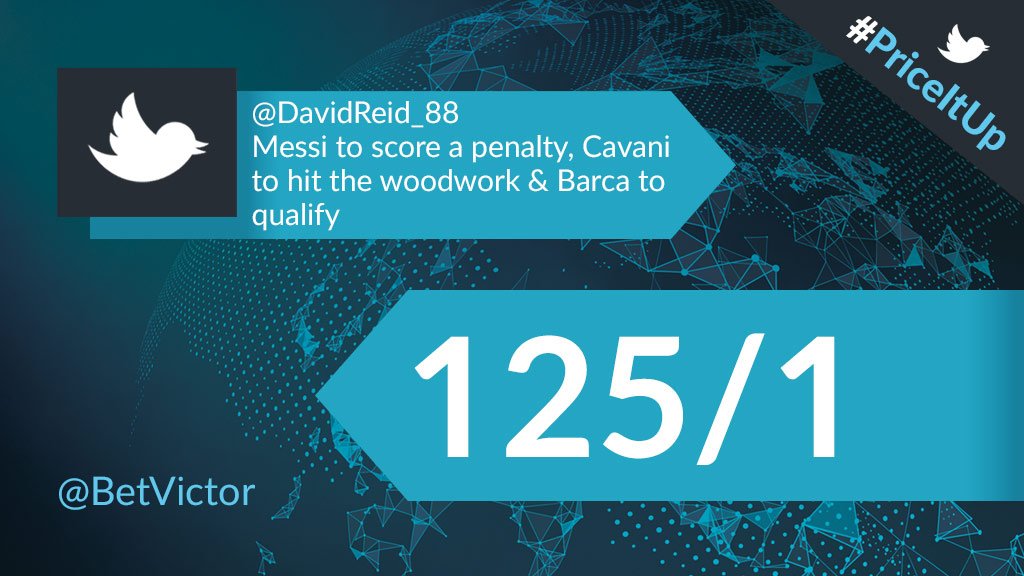 As the game unfolded all three events occurred;

So far so good for David.

That was until he realised BetVictor had settled the bet as a loser.

As you'd expect David queried the apparent mistake only to be hit with the inexplicable response below.

Of course he hit the woodwork. We all saw it. News outlets reported on it. It happened. BetVictor reasoned further; 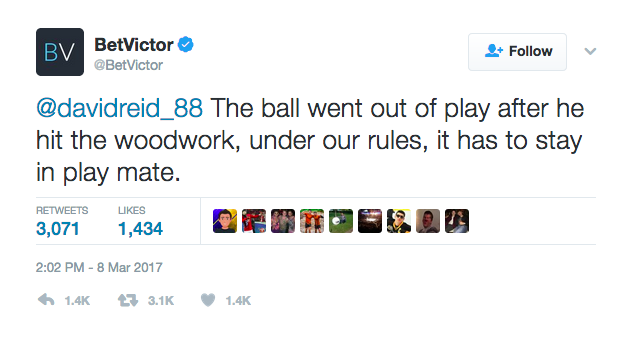 What? Yes, tucked away at the bottom of BetVictor's Price It Up rules was this cracker;

20. For any bets involving players hitting the woodwork, the following rule will be applied: “The ball must make contact with the woodwork and come back in play from an attempt on the opponent's goal during active play. Shots that hit the woodwork on their way into the goal will count. Any dubious shots will be settled off the competitions official websites.

So because Cavani's strike went out of play after hitting the post BetVictor invoked their get-out clause. I can't think why this particular clause would exist? Except to minimise losses in the event of it happening? Answers on a postcard please.

Despite the legalities of the clause it's clearly ridiculous. Yes it's our responsibility to read and understand the rules before we place a bet with any bookie but the phrase “hit the woodwork” is unambiguous and the commonsense understanding of it would apply to Cavani's shot which struck Ter Stegen's post.

Needless to say, punters across twitter were rightly outraged BetVictor weren't paying out and that such a clause exists. While the issue went viral BetVictor's social media guy appeared to have called it a night and it quickly turned in to a PR disaster for the firm. Punters started to highlight other dubious non-payments, unfair betting limits and account closures by Victor Chandler's company and many threatened to close their account themselves.

BetVictor had to act quickly … and they did. By morning they announced they were paying out on the “woodwork” bet – and rightly so. 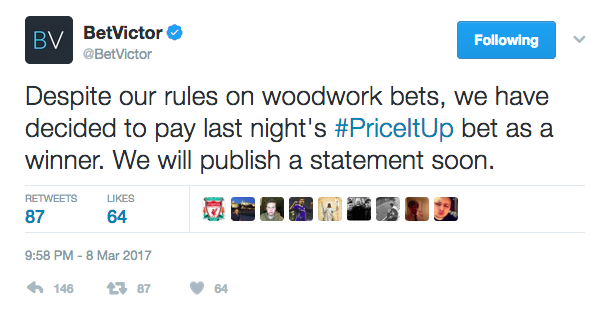 But in a reply to David they referred to this decision as “gesture of goodwill”. Wrong answer BetVictor!

They should've held their hands up and admitted their rules were misleading and they would make an immediate change to reflect the commonsense view of “hitting the woodwork”. Instead they've lurched from one disaster to another. Let's see what their proposed statement comes up with later.

With Cheltenham around the corner BetVictor have ballsed-up almost as much as PSG did last night. However, the whole episode shows with the power of social media we can take the bookies and their dubious practices to task.

BetVictor still have the chance to redeem themselves but they got this one wrong. Very wrong.

BetVictor's statement has confirmed that “any shot that hits any part of the woodwork will count going forward.”

Here is the full draft from https://sports.betvictor.com/priceitup-woodwork-bet-barcelona-v-psg/;

Yesterday evening we accepted a small number of bets on a #PriceItUp market, ‘Messi to score a penalty, Cavani to hit the woodwork and Barca to qualify’ at 125-1 in the Barcelona v PSG Champions League match.

Customers request this type of tailored bet via Twitter and our Trading and Social Media teams price up the requests and reply to customers.

We settled these particular bets as losers, as under our betting rules for #PriceItUp, which are listed on our website, we have the following rule regarding woodwork-related bets:

For any bets involving players hitting the woodwork, the following rule will be applied: “The ball must make contact with the woodwork and come back in play from an attempt on the opponent’s goal during active play. Shots that hit the woodwork on their way into the goal will count.”

As Cavani’s shot against the woodwork didn’t rebound back into play, we settled these bets in line with the above rule, which was designed to prevent ambiguity around shots that may or may not have skimmed the woodwork.

However, we accept that in this case with #PriceItUp markets, these terms were not made clear within the individual bet, and, as such, have now settled all bets on this selection as winners. All of the customers involved have been individually contacted by us.

Moving forward, to avoid any confusion, we will update the relevant rule and publish it ahead of our next #PriceItUp fixture, which is scheduled to be next Monday 13th March for the FA Cup 6th Round clash between Chelsea and Manchester United.

We can confirm that any shot that hits any part of the woodwork will count going forward.

We apologise for any confusion caused.