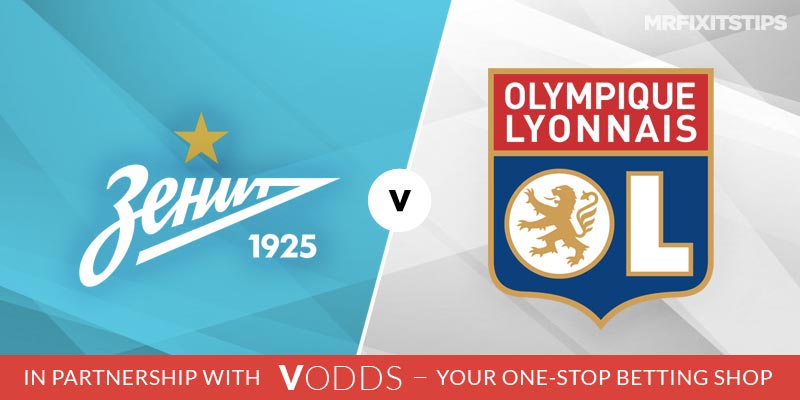 GROUP G has lived up to its billing as one of the most open Champions League sections, with all four sides still in with a chance of reaching the last 16.

But Lyon can kill off the suspense with a game to spare by beating Zenit to seal their progression and after watching Leipzig stroll to victory in St Petersburg they won't travel with any fears.

I fancied home advantage to help Zenit edge that showdown with the Germans but they were totally outplayed by a vibrant Leipzig side, who were well worth their 2-0 victory.

That made it back-to-back defeats for Sergei Semak's men against the group leaders, stalling their momentum after taking four points from the first two group games.

They need to get back on track with a win over Lyon and can take heart from their unbeaten home record against French clubs, winning four and drawing the other two.

Lyon have also won just one of their last six games against Russian clubs, although that victory did come on the road against CSKA Moscow on their last trip east.

It ended 3-1 to Zenit when these sides last clashed in Russia in the group stage four years ago but I'm wary of tipping a home win (a best 7/5 with Sportingbet) again given how poor Semak's side were against Leipzig.

Instead, I'll be backing a draw, which is a best 13/5 with Unibet, as that was the case on Matchday One when these sides battled to a 1-1 stalemate in France.

Both teams head into the game on the back of 2-1 domestic victories, with Zenit winning at Rubin and Lyon seeing off Nice at home.

Lyon star Memphis Depay sat that game out, having aggravated a thigh injury on international duty with the Netherlands, and if he misses out again it will be a huge blow.

The forward, linked with a return to Manchester United, has netted in every group game so far and fans will be praying he recovers in time to feature here. If he fails to make it then the burden for goals will fall on former Celtic star Moussa Dembele.

The striker is in decent form, with four goals in his last five games, but has drawn a blank so far in the Champions League. Dembele is 17/10 with Paddy Power for anytime scorer here which is decent value given he takes the Lyon penalties.

Zenit talisman Artem Dzyuba is 7/5 with Ladbrokes in the same market and looks his side's best for a goal. The towering striker netted his 15th of the season at Rubin, ending a five-game run without a goal.

The performance of left-back Douglas Santos was one of the few positives for Zenit against Leipzig and I was hugely impressed by him. The Brazilian is a good long-odds option for a goal at 15/1 with 888Sport but is more likely for an assist. That market hasn't been priced up yet but I'll check on the day of the game.

With the teams being evenly matched I can see it being a bit cagey in the first half so that lends value to the 11/10 Marathonbet offer on the second 45 being the highest-scoring half.

This UEFA Champions League match between Zenit St Petersburg and Lyon will be played on Nov 27, 2019 and kick off at 17:55. Check below for our tipsters best Zenit St Petersburg vs Lyon prediction. You may also visit our dedicated betting previews section for the most up to date previews.