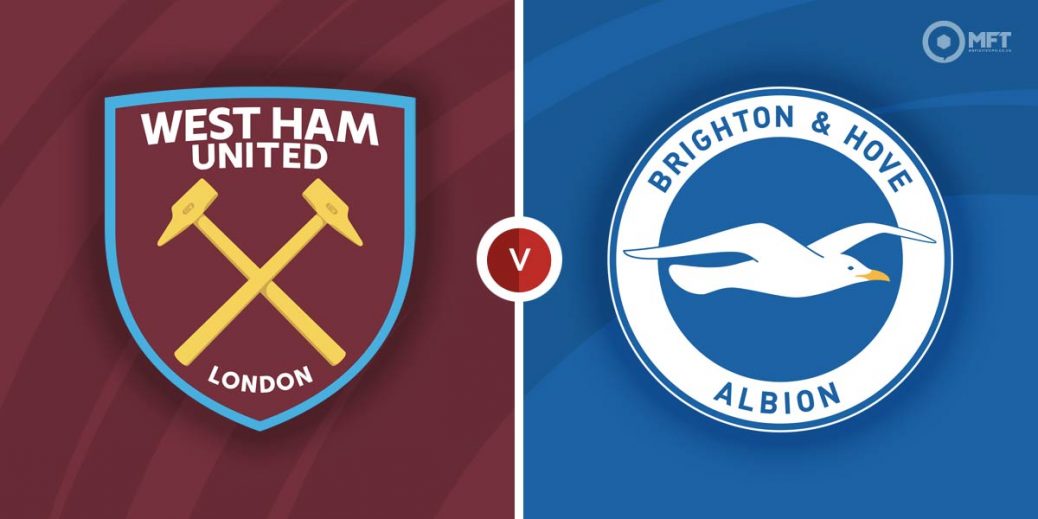 West Ham have a number of teams breathing down their neck and will be keen to strengthen their hold on fourth place when they host Brighton. The visitors have looked off colour in recent weeks and could struggle at the London Stadium.

It has been a difficult couple of weeks for West Ham as they have lost their last two Premier League matches. First they were beaten 1-0 by Wolves before suffering a 2-1 defeat to Manchester City in their previous fixture.

Although they remain fourth on the table, recent results mean West Ham are now looking over their shoulders. They will be keen to fend off fast rising Arsenal and Wolves.

The good news for manager David Moyes is that West Ham have been on the road in their last two matches and are set to return to the London Stadium. They have won their last two home fixtures, including a 3-2 victory over high flying Liverpool.

The pressure appears to be mounting on Brighton manager Graham Potter as his team was booed off after their 0-0 draw with Leeds United last Saturday. They failed to make their superior possession and chances count, much to the frustration of the supporters.

Beyond the game against Leeds United, it has been a generally rough period for Brighton, who are currently on an eight-match winless run. They have been steadily dropping down the table and could fall as low as 15th if midweek results do not go their way.

Brighton’s form on their travels has also left a lot to be desired in recent weeks as they are winless in their last four away matches. They were beaten 2-0 by Aston Villa in their previous fixture on the road.

The bookies have West Ham as favourites at evens with SpreadEX while a victory for Brighton & Hove Albion is valued at 3/1 with Unibet. A draw is set at odds of 11/4 by SBK.

West Ham and Brighton have drawn their last five meetings and played out a 2-2 scoreline in their most recent meeting at the London Stadium.

Mikhail Antonio is currently on a lengthy goal drought but remains the top scorer for West Ham this season with six goals. The striker is priced at odds of 6/4 with MansionBet to get on the score sheet on Wednesday.

Neal Maupay has also looked off colour lately but often carries the goal threat for Brighton. The striker was on target at the London Stadium last season and is priced at 5/2 by Vbet to find the net again.

West Ham and Brighton have seen over 3.5 goals in two of their last three fixtures and a similar outcome is priced at 27/10 with BetVictor. Over 2.5 goals can also be considered at 42/41 with SBK.

There has been second half BTTS in the last five matches between West Ham and Brighton and that run could be set to continue at 5/2 with William Hill.