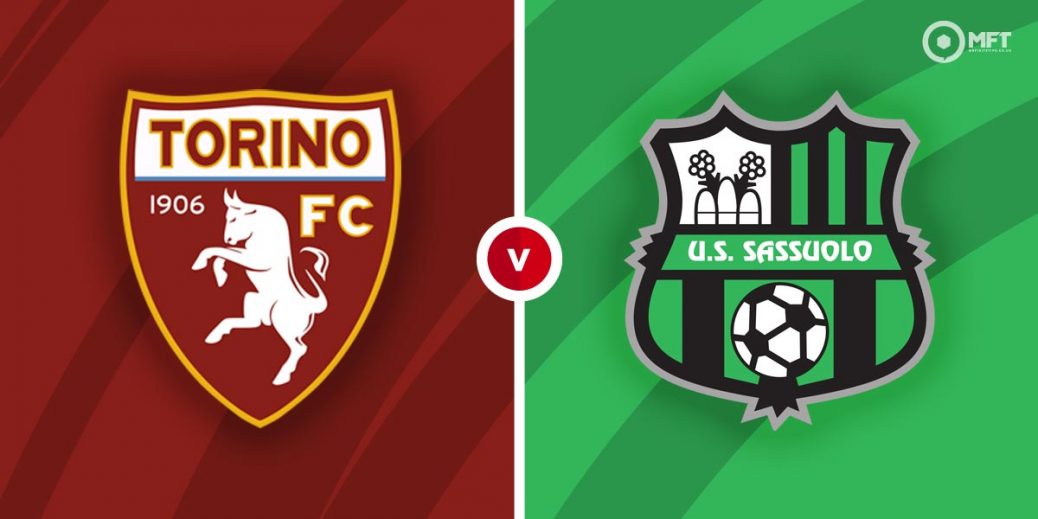 Torino will hope to begin their great escape when they host Sassuolo in an Italian Serie A clash at the Stadio Olimpico Grande Torino. The hosts are starting to put their squad together after a COVID-19 outbreak and should have the edge over an inconsistent Sassuolo team.

Torino are coming off a 2-1 defeat against leaders Inter Milan in their previous Serie A fixture. The game looked to be heading for a draw after Antonio Sanabria struck an equaliser midway through the second half but they conceded the winner five minutes from time.

The result meant that Torino remain stuck in the relegation zone but with two games in hand on the teams around them, will be hopeful of catching up starting with Wednesday’s clash.

Before their squad was rocked by the COVID-19 outbreak, manager Davide Nicola appeared to have steadied things after leading the team to a six match unbeaten run. He will be pleased with the performance against Inter Milan and look beyond the result with a number of players making a return, including star striker Andrea Belotti.

Torino often take pride in their home record and head into Wednesday’s match with just one defeat in their last six matches at the Stadio Olimpico Grande Torino.

Sassuolo were victorious in their last Serie outing as they triumphed 3-2 against Hellas Verona. Manuel Locatelli opened the scoring early in the first half before Filip Djuricic and Hamed Traore added further goals in a topsy-turvy game.

The result ended a run of three matches without a win for Roberto de Zerbi's men, who are often plagued by inconsistency.

They are 11 points behind Roma in the final European place and look set for mid-table obscurity this season.

Sassuolo have a poor record on the road with just one win in their last six away matches. among the results on their travels is a 5-1 defeat to Atalanta while they were also beaten 2-0 at Udinese in their last away match.

Wednesday’s match appears too close to call but the bookies have given Torino the slight edge. William Hill is offering 8/5 for a home win, a victory for Sassuolo is priced at 19/10 by SBK while a draw is set at odds of 5/2 by bet365.

With Torino boosted by the return of key players like Andrea Belotti, I am leaning towards a home win here.

Torino have the upper hand in the head to head with 10 wins from 23 previous matches. Sassuolo have claimed five victories while both teams have battled to eight stalemates, including a 3-3 draw in the reverse fixture in October.

Il Toro have won the last three meetings in Turin with the most recent ending 2-1 thanks to goals from Simone Zaza and Andrea Belotti.

Despite being out for weeks, Andrea Belotti remains the top scorer for Torino with 11 goals. Skybet is offering 3/2 on the striker to score anytime while forward Antonio Sanabria is priced at 11/5 by William Hill in the same market after netting twice in two starts.

Sassuolo will look to striker Francesco Caputo to provide the spark in attack as he looks to add to his 11 goals this season. He is priced at 17/10 by Skybet in the anytime goalscorer market while the first goal is valued at 5/1 by Betfred.

Both teams often adopt an open style of play and are expected to serve up goals on Wednesday. Over 2.5 goals is valued at 4/5 by bet365, over 3.5 goals is priced at 2/1 by BetVictor while William Hill is offering 4/1 for over 4.5 goals which was the outcome in the last meeting.

Torino have conceded the opening goal in their last two matches, so Sassuolo can be backed to score first at 21/20 with betway. The Turin club could also be worth a punt to secure a come from behind win at 12/1 with BetVictor.

This Serie A match between Torino and Sassuolo will be played on Mar 17, 2021 and kick off at 14:00. Check below for our tipsters best Torino vs Sassuolo prediction. You may also visit our dedicated betting previews section for the most up to date previews.