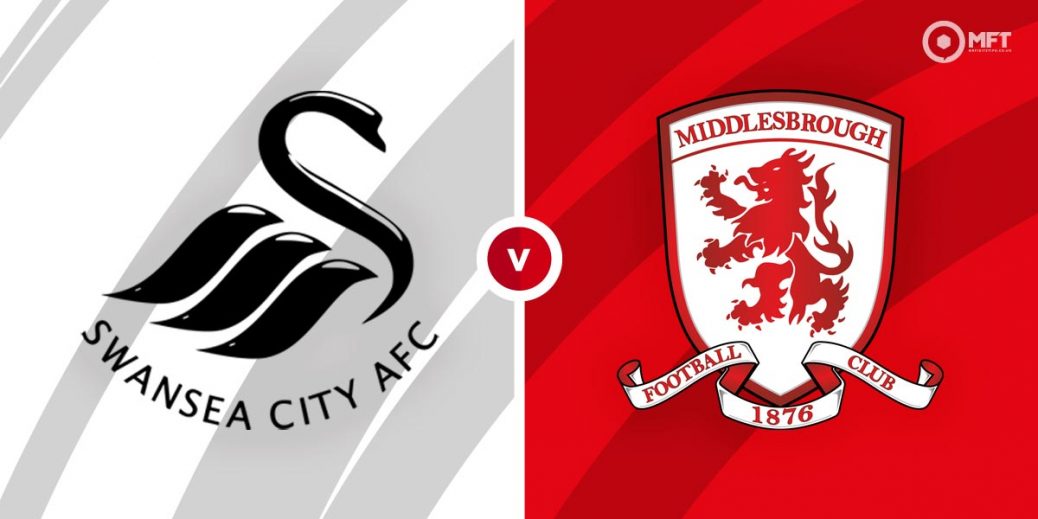 Promotion chasers Swansea welcome Middlesbrough to the Liberty Stadium for an English Championship clash on Saturday. Boro have the quality to cause problems in Wales but the Swans often do well at home and will be confident of picking the points.

Swansea now have some breathing room in the promotion playoff race after claiming a 2-1 victory at Stoke in their midweek Championship fixture. They fought back from a goal down with Connor Roberts getting the equaliser before Andre Ayew struck a dramatic 90th minute winner.

It is a result that will give the Swans plenty of confidence after stumbling slightly in recent weeks. They are now fourth on the table, five points above the chasing pack and crucially with two games in hand.

Steve Cooper’s men will be pleased to return to the Liberty Stadium where they have suffered just one defeat in the last 15 appearances. They have also won three of their last four home matches, keeping clean sheets in all three wins.

Middlesbrough were also victorious in their midweek Championship fixture as they saw off Coventry City 2-1. They recovered from Anfernee Dijksteel's early own goal to win thanks to efforts from Grant Hall and George Saville.

It was a welcome return to winning ways for Neil Warnock's men, who had failed to win in their previous two matches. Recent stumbles mean their promotion prospects have taking a dent in recent weeks as they sit ninth, five points off Bournemouth in the final playoff place.

Swansea City are favourites among the bookies with SBK offering 7/5 for a home win. A victory for Middlesbrough is priced at 5/2 by Skybet while bet365 has a draw set at odds of 23/10.

With Swansea often solid at home, I am tempted to back a home win here.

Swansea have claimed six wins from 14 previous matches against Middlesbrough. Boro have been victorious just four times while both teams have battled to four draws.

The Swans suffered a 2-1 defeat in the reverse fixture back in December.

Ghanaian forward Andre Ayew grabbed his 10th goal of the season at Stoke and could be worth a punt to score anytime at 2/1 with Unibet. He often has support from Jamal Lowe, who has found the net nine times and is valued at 11/4 by bet365 in the same market.

Midfielder Duncan Watmore is the leading scorer for Middlesbrough and is priced at 21/5 by Unibet in the anytime goalscorer market. Striker Britt Assombalonga could also be considered in the same market at 11/4 with bet365.

Eight of Andre Ayew’s 10 goals this season have been the first in the match. He is priced at 5/1 by Unibet to score the first goal while Middlesbrough’s Britt Assombalonga is valued at 7/1 in the same market after scoring the opening goal four times this season.

A flutter in the goals market could offer some rewards with both teams often solid going forward. Over 2.5 goals is valued at 7/5 by BetVictor while over 3.5 goals is offered at 18/5 by Unibet.

This English Championship match between Swansea City and Middlesbrough will be played on Mar 6, 2021 and kick off at 15:00. Check below for our tipsters best Swansea City vs Middlesbrough prediction. You may also visit our dedicated betting previews section for the most up to date previews.