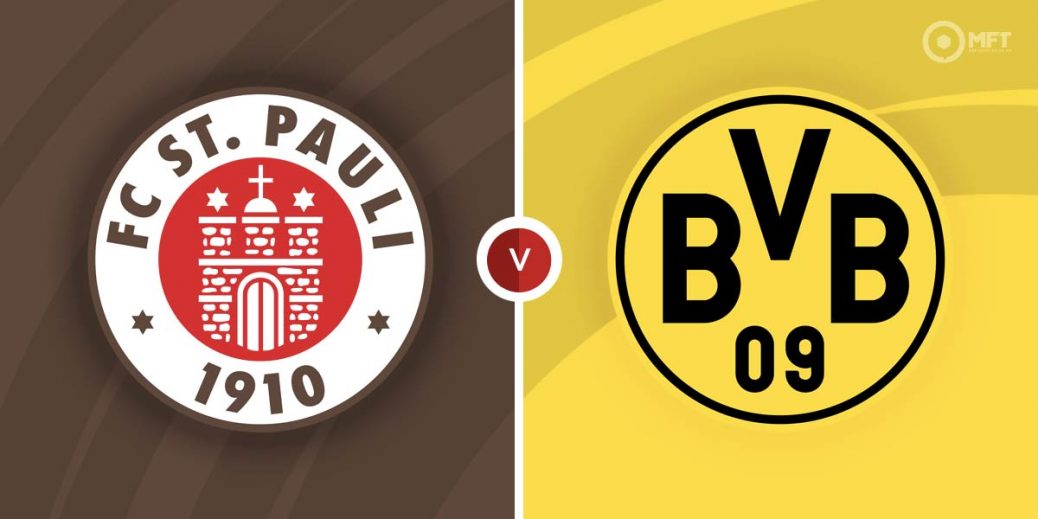 Borussia Dortmund continue the defence of their DFB Pokal title as they travel to St Pauli for a round of 16 clash on Tuesday. Dortmund appear to be hitting their stride at the moment and should have too much for the Bundesliga 2 side.

St Pauli are currently leading the Bundesliga 2 but are getting a lot of pressure from teams below them as they sit just one point clear at the top. They appear to have lost their way slightly in recent weeks and are winless in their last three matches.

Timo Schultz’s men booked their place in the round of 16 thanks to a 3-2 victory over fellow Bundesliga 2 side Dynamo Dresden. They twice took the lead but were pegged back both times before Christopher Buchtmann netted the winner in extra-time.

That result points to a defensive problem that has plagued St Pauli for much of the season as they are without a clean sheet in their last 11 matches across all competitions. Those issues were at the fore in their Bundesliga 2 fixture on Saturday as they had to twice come from behind to earn a 2-2 draw with Erzgebirge Aue.

Things appear to be looking up for Borussia Dortmund at the moment as they have made a fine start to the new year. They are playing with plenty of confidence right now and are constantly cranking up the pressure on leaders Bayern Munich in the Bundesliga.

Dortmund travel to St Pauli off the back of three wins from their last four matches. They warmed up for Tuesday’s clash with a 5-1 victory over Freiburg on Saturday with Erling Haaland and Thomas Meunier each netting a brace.

Marco Rose’s men have also not tasted defeat in the DFB Pokal since September 2020 and are currently on an eight-match winning run in the competition. They reached the round of 16 thanks to a 2-0 victory over Ingolstadt with Thorgan Hazard netting a brace.

Dortmund have the upper hand among the bookies and are priced at 1/2 by bet365 to claim the win. A victory for St Pauli is valued at 11/2 by Betfred while a draw is set at odds of 19/5 by SBK.

Borussia Dortmund are unbeaten in the last 13 matches against St Pauli, claiming 12 wins in that run. The most recent meeting was a 3-2 victory in a preseason friendly back in 2016.

Guido Burgstaller has scored 14 Bundesliga 2 goals this season and will be the one to watch for St Pauli on Tuesday. Bet365 has the Austrian striker at odds of 15/8 to find the net.

Erling Haaland just ended a mini drought with his goal on Saturday and will be looking to go on a scoring run. The Norwegian striker already has 21 goals across all competitions this season and could is priced at 4/9 by bet365 to score anytime on Tuesday.

There have been over 3.5 goals in Borussia Dortmund’s last three matches and a similar outcome is priced at 23/20 by novibet. All three matches have seen more goals after the break so the second half could be tipped as the highest scoring half at 20/21 with Sporting Index.

Given the minimal odds for a straight Dortmund victory, a win and over 3.5 goals should offer more value at 15/8 with Paddy Power.

This match between St Pauli and Borussia Dortmund will be played on Jan 18, 2022 and kick off at 19:45. Check below for our tipsters best St Pauli vs Borussia Dortmund prediction. You may also visit our dedicated betting previews section for the most up to date previews.