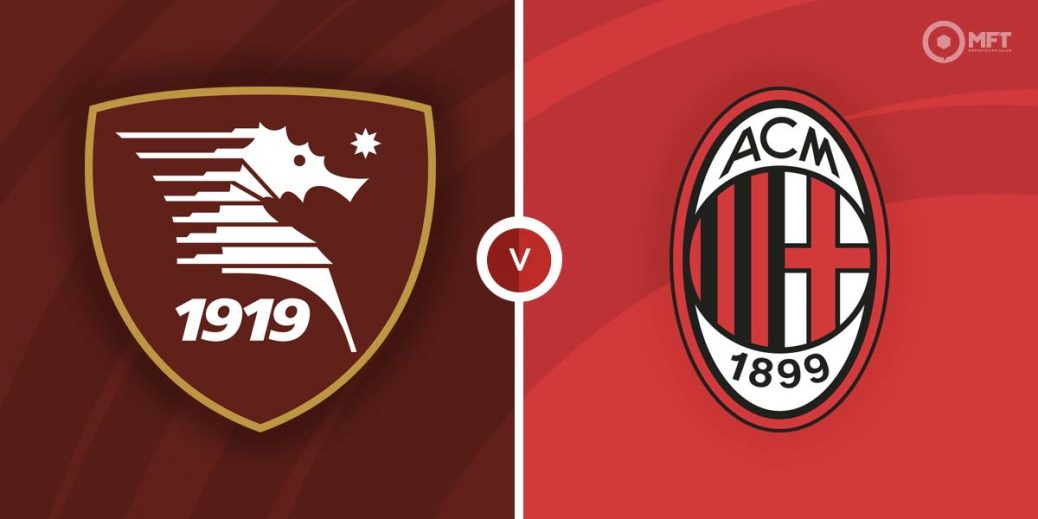 After climbing to the summit of Serie A, AC Milan will be looking to fend of the chasing pack. They travel to Salernitana on Saturday and will be confident of coming out on top against the bottom club.

Time is running out for Salernitana as they look set to take the plunge into Serie B. They are eight points from safety having spent the entire season rooted to the bottom of the table.

Salernitana were held to a 1-1 draw by Genoa in their previous Serie A fixture with Federico Bonazzoli getting their goal. That result means Davide Nicola’s men have only claimed three wins from 23 Serie A matches this season, suffering 16 defeats in that run.

There have been little home comfort this season for Salernitana, who have won just once on their own turf. They head into Saturday’s clash with six defeats in their last seven matches at the Stadio Arechi.

AC Milan have won their last two Serie A matches and are now one point above Inter Milan, who have played a game less.

AC Milan are coming off a 1-0 home victory over Sampdoria in their previous Serie A fixture. They struck early in the first half through Rafael Leao and despite failing to build on that lead, were able to hold on for the win.

The Rossoneri have surprisingly fared better on their travels having suffered just one away defeat all season. Stefano Pioli’s men have won four of their last five Serie A away matches and triumphed 2-1 over champions Inter Milan in their previous fixture on the road.

AC Milan have the upper hand among the bookies at 39/100 by novibet while an unlikely victory for Salernitana is valued at 10/1 by bet365. A draw is set at odds of 9/2 with betway.

AC Milan claimed a 2-0 victory in the reverse fixture back in December.

Olivier Giroud has been in good form for AC Milan in recent weeks with four goals in his last three appearances across all competitions. The French striker is priced at odds of 21/20 by Betfred to get on the score sheet on Saturday.

Federico Bonazzoli has been the standout player for Salernitana and heads into Saturday’s clash with goals in his last two matches. Paddy Power has the striker at odds of 5/1 to get on the score sheet.

AC Milan have kept just one clean sheet in their last four matches and are likely to concede on Saturday. Both teams could be backed to score at 42/41 with SBK while over 2.5 goals is valued at 13/20 with novibet.

A win for AC Milan and both teams to score could also be considered at 2/1 with bet365. Milan have scored in both halves in two of their last three away matches and could be set for a repeat at 21/20 with Coral.

This Serie A match between Salernitana and AC Milan will be played on Feb 19, 2022 and kick off at 19:45. Check below for our tipsters best Salernitana vs AC Milan prediction. You may also visit our dedicated betting previews section for the most up to date previews.