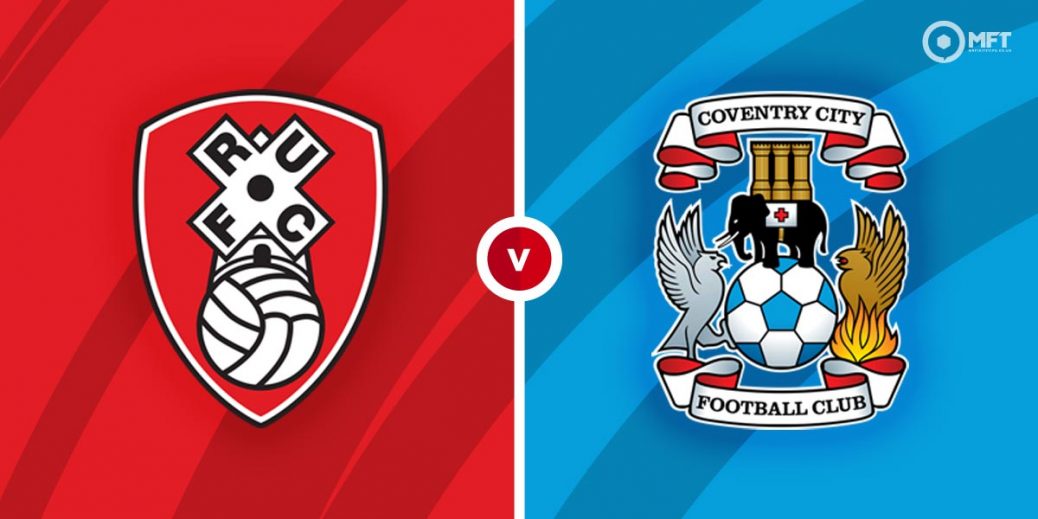 The battle for survival heats up as Rotherham United host Coventry City in an English Championship clash at the New York Stadium. Both teams are battling near the bottom of the table but Rotherham appear to be building up some momentum and should have the edge on Thursday.

Rotherham United earned a 3-1 victory over QPR in their previous Championship fixture. They fought back from a goal down with a second half brace from Freddie Ladapo and a 90th minute effort from Michael Smith giving them the win.

Paul Warne’s men are still in the relegation zone but Tuesday’s result means they have now moved to within three points of safety. They will hope to use the win as a springboard to build some momentum in their quest for survival with a win on Thursday likely to take them out of the bottom three.

Despite their generally poor campaign, Rotherham United have managed to claim some results in recent weeks. They claimed a 2-1 victory at Sheffield Wednesday and also beat Bristol City 2-1 before holding Huddersfield Town to a 0-0 draw prior to the win over QPR.

Coventry failed to build on their 3-1 victory over Bristol City as they were beaten 4-1 by Bournemouth last time out in the Championship. Matty James' effort on three minutes proved to be a mere consolation as they were no match for the rampant Cherries.

The Sky Blues are also deep in relegation trouble as they sit just three points above Rotherham in the relegation zone. They have an inferior goal difference to the Millers and a defeat on Thursday could see them overtaken by their hosts.

Mark Robins' men have a poor record on their travels and head to the New York Stadium winless in their last eight away matches. They have suffered six defeats in that run and have also failed to score in two of their last three matches on the road.

Thursday’s match is expected to be a closely fought contest but the bookies have placed Rotherham United as slight favourites at 6/4 with William Hill. A win for Coventry City is priced at 2/1 by SBK while Vbet is offering 26/11 for a draw.

Rotherham United are likely to take confidence from their win over QPR and I am backing them to earn another victory here.

Coventry City have a slight edge in this fixture with five wins from 13 previous matches. Rotherham United have been victorious four times while there have also been four draws between both teams.

Coventry earned a 3-1 victory in the reverse fixture back in December but Rotherham triumphed 4-0 the last time they faced the Millers at the New York Stadium during the 2019/20 season.

Freddie Ladapo appears to be kicking into gear at the right time following his brace last time out. The striker’s goals will be vital for Rotherham United in their quest for survival and he could be worth punt to score anytime at 7/4 with bet365.

Tyler Walker remains the top scorer for Coventry City but has failed to find the net since February. The Sky Blues will be hoping the striker can rediscover his scoring touch with Vbet offering 5/2 in the anytime goalscorer market.

Rotherham's last outing produced over 3.5 goals and SBK is offering 56/19 for a similar outcome while over 2.5 goals is set at odds of 15/13 by Red Zone. With neither team particularly convincing at the back, we can also expect goals in both halves at 23/25 with Sporting Index.

Both teams often score much of their goals in the second half which could be backed as the highest scoring half at 15/13 with Sport Nation. Rotherham could also be picked to score first at evens with Skybet.