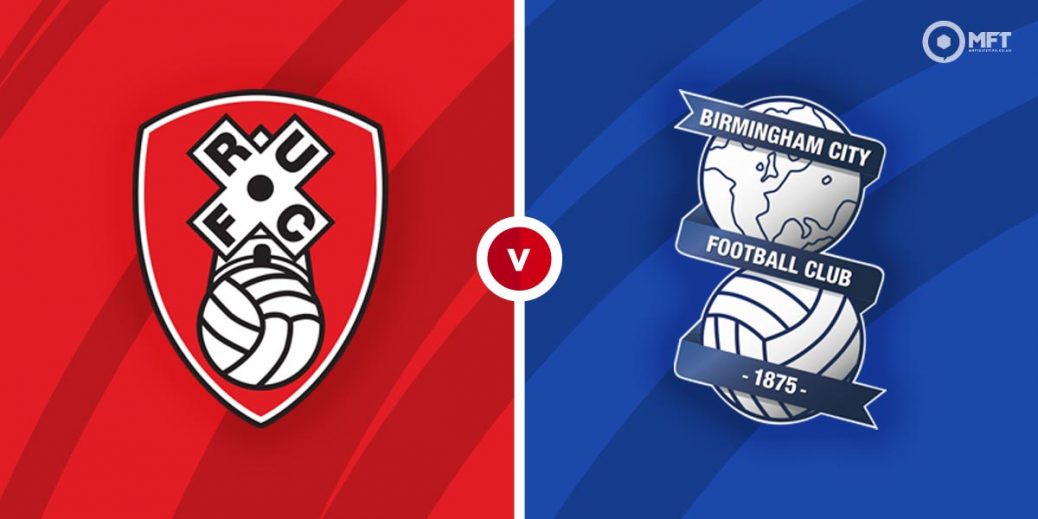 BIRMINGHAM CITY can all but make themselves safe from English Championship relegation and push Rotherham United closer to the trap door if they get three points in a massive Sunday lunchtime clash.
The Millers' defeat at home to Coventry City was a crushing disappointment to manager Paul Warne who admitted after the game he had no complaints about the outcome.
Rotherham are now six points better off than Birmingham, although the Blues have played two games more. The hosts have four points to make up on Derby to save themselves.
That midweek result in Yorkshire capped a good week for Birmingham who have been encouraged they can beat the drop with an impressive mini-run which has seen them go four games without a defeat.
A tough losing batch of three fixtures against Swansea City, Brentford and Stoke City has seen them win two of them and draw the other and crucially, they didn't concede a goal in that spell.
It will give them massive confidence for their trip to the New York Stadium as Rotherham prepare for their fourth match in eight days.

The hosts can be backed at 9/5 with William Hill's, while the St Andrew's side are 17/10 with Betfred. The draw is available at 11/5 with TonyBet.

The sides battled out a 1-1 draw in September in Birmingham with two penalties converted by Jeremy Bela and Kieran Sadlier. Birmingham have an excellent record against Rotherham and haven't lost there since 1989 at their old ground of Millmoor.

Michael Smith is the only Rotherham player to reach double figures this season and he has ten goals in 39 appearances. He's 3/1 with Unibet to add to his tally on Sunday.
Lukas Jutkiewicz's double last week helped down Stoke and the former Motherwell striker could be finding form at the right time of the season. He's a decent price at 23/10 to score anytime with Paddy Power.

Rotherham's busy schedule appears to be catching up with them. They looked tired and lethargic against Coventry and were fortunate to only lose 1-0.
In contrast, Lee Bowyer has really added some spark to the Blues and their recent run must have helped to build their confidence after a poor season.
It all points to the value being with the visitors at a good price too.
Rotherham's New York Stadium is far from a fortress too – they have the worst home record in the league with five wins out of 20 and have won only one game there since the start of February.
Rotherham and Birmingham are both in the top five of average booking points for the season and they've each had four red cards in the league this season.
Ref Tim Robinson has dished out five yellow cards in two of his last three games so the 11/2 for a red card with bet365 in such a high-tension affair has a chance as an outsider.