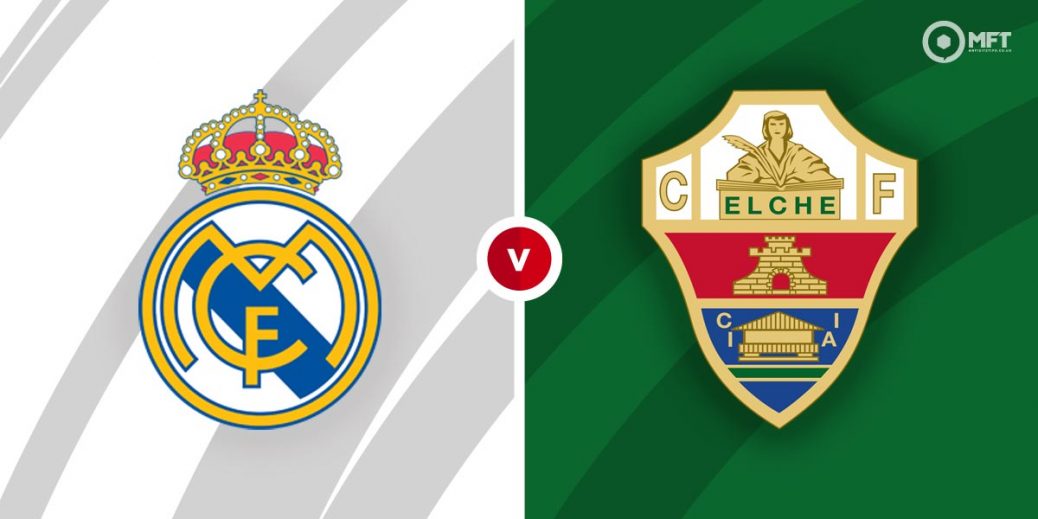 Real Madrid continue their title defence as they host Elche in a Spanish La Liga fixture at the Estadio Alfredo Di Stefano. Real are hoping to bounce back from consecutive draws and should be too strong for Elche, who are struggling near the bottom of the table.

Los Blancos kept alive their title hopes with a 1-1 draw against rivals Atletico Madrid in the derby last time out. They trailed for long periods of the game before Karim Benzema struck the equaliser two minutes from time.

It was the second consecutive draw for Zinedine Zidane’s men who were also held to a similar scoreline in their previous fixture. They have now dropped to third on the table, two points behind Barcelona and five off leaders Atletico Madrid.

Real Madrid appear to be going through a mini slump but have remained unbeaten in their last six matches. They are often solid at home and can count victories over Getafe and Valencia among their recent results at the Estadio Alfredo Di Stefano.

Elche are coming off a surprise 2-1 victory over Sevilla in their last La Liga outing. They took a two-goal lead midway through the second half through Raul Guti and Guido Carrillo before conceding late on to make for a nervy ending.

It was only the fifth win of the season for Fran Escriba’s men, who have found life in the topflight difficult. They remain mired in the battle for survival and sit just two points above the relegation zone.

Elche have been hampered by an abysmal away form as they are without a win on their travels since October. They are currently on a four-match losing streak on the road, a run that includes a 3-0 defeat to title chasers Barcelona.

Real Madrid are overwhelming favourites among the bookies with Vbet offering 11/50 for a home win. A victory for Elche is priced at 17/1 by SBK while Vbet also values a draw at odds of 61/10.

Madrid are usually solid at home and should earn a comfortable win over Elche.

Real Madrid have never lost to Elche with four wins and a draw from the previous five matches. The only stalemate came in the reverse fixture which ended 1-1 while Madrid ran out 5-1 winners the last time they faced Elche at home during the 2014-15 season.

Karim Benzema has saved Real Madrid countless times this season and was once again the hero last time out against Atletico. Unibet has the French striker at 13/20 to score anytime while the first goal is priced at 13/5 by the same firm.

Lucas Boye is the top scorer for Elche with five goals and the striker is priced at 13/2 by bet365 in the anytime goalscorer market. He often has support from Guido Carrillo who is also valued at 13/2 by Unibet in the same market.

Since Real Madrid are expected to earn a comfortable win, a handicap bet might provide some value. A -1 handicap is priced at 66/100 by Sporting Index while a -2 handicap is offered at 9/5 by the same firm.

Real Madrid can also be backed to score three or more goals with Skybet offering evens in that market. A score/win double is also worth considering with bet365 pricing Madrid to win and Karim Benzema to score the first goal at odds of 24/10.

This La Liga match between Real Madrid and Elche will be played on Mar 13, 2021 and kick off at 15:15. Check below for our tipsters best Real Madrid vs Elche prediction. You may also visit our dedicated betting previews section for the most up to date previews.