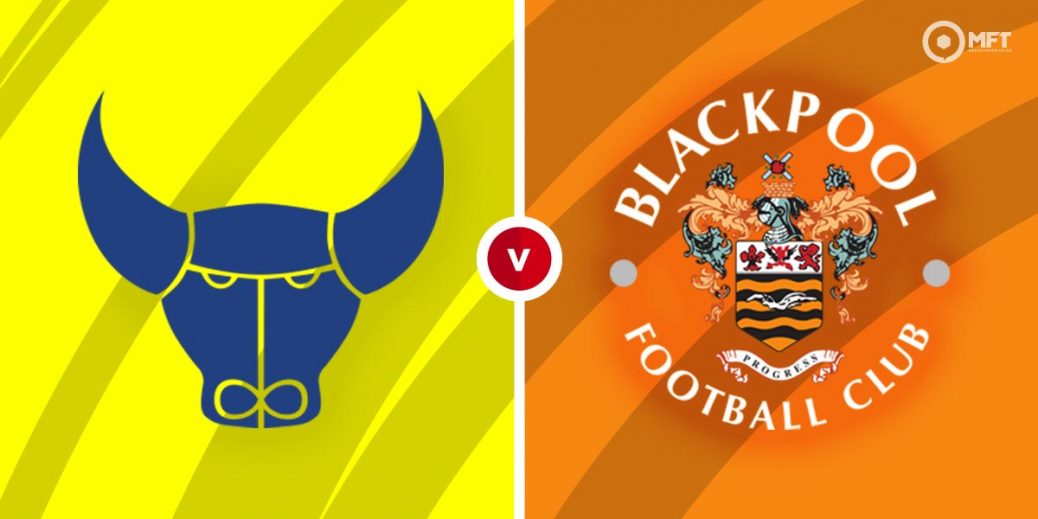 Oxford United welcome Blackpool to the Kassam Stadium for the first leg of their English League One playoff. Having ended the regular season in fine form, both teams appear evenly matched heading into this one and are likely to cancel each other out.

Oxford United head into the playoffs with a 4-0 victory over Burton Albion in their final League One fixture of the season. They had four different goalscorers with Olamide Shodipo and Matt Taylor giving them a two-goal lead at half time while Elliott Lee and Sam Winnall added further goals after the break.

The U’s secured a playoff spot on goal difference after finishing level on 74 points with seventh place Charlton Athletic. They made a late rally in the season run-in, winning six of their final seven League One fixtures to earn their place in Tuesday’s match.

While manager Karl Robinson takes pride in his team’s attacking prowess, they face a Blackpool side whose style is built on a sturdy defence. They already had a taste of Blackpool’s defensive solidity, failing to score against the Seasiders in two regular season fixtures.

Blackpool ended the regular season with a 1-0 victory over Bristol Rovers. It was another solid defensive display as they restricted Bristol to just one attempt on target with Ellis Simms' effort midway through the second half proving to be the difference.

The Seasiders also had a fine end to the regular season, winning their final four matches. That run was driven by solid defensive displays as they kept clean sheets in all four matches.

Neil Critchley’s men also have a solid record on their travels with just one defeat in their last nine away matches in League One. They kept clean sheets in the last two matches in that run and are likely to once again adopt a defensive approach on Tuesday.

Oxford are slight favourites among the bookies with a home win valued at 19/12 by SBK. A victory for Blackpool is valued at 21/10 by Unibet while betway is offering 23/10 for a draw.

There is little to separate both teams at the moment and a draw looks the most likely outcome here.

Oxford United have a 6-5 edge in this fixture with three draws from 14 previous matches against Blackpool. However, the Seasiders were unbeaten in two regular season meetings, playing out a 0-0 draw in the first fixture before winning 2-0 at the Kassam Stadium in March.

Oxford United will hope Matt Taylor can continue his scoring form after finishing the regular season with 18 goals. Unibet has the forward at 43/20 to score anytime while the first goal is set at odds of 6/1 by Betfred.

Blackpool often build their style on a sturdy defence and ended the season with four straight clean sheets. Marvin Ekpiteta and Jordan Thorniley often feature at centre back and will hope to guide the team to another clean sheet at 23/10 Sporting Index.

Blackpool’s defensive strength means they have seen under 2.5 goals in seven of their last eight matches. A similar outcome is priced at 5/7 with Vbet.

This English League One match between Oxford United and Blackpool will be played on May 18, 2021 and kick off at 18:00. Check below for our tipsters best Oxford United vs Blackpool prediction. You may also visit our dedicated betting previews section for the most up to date previews.