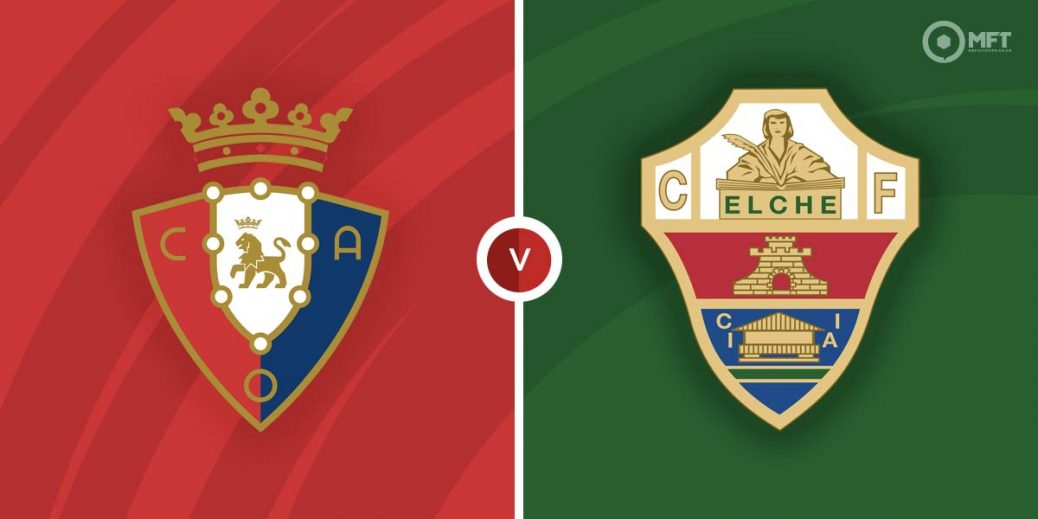 Osasuna host Elche in a Monday night Spanish La Liga fixture with both teams desperate for a win for different reasons. Elche have fared much worse than their hosts and could be in for a difficult evening.

Osasuna started the season with a lot of optimism and looked like challenging for a continental place. However, something appears to have gone wrong in recent weeks as they are now winless in their last five matches.

Despite their recent struggles, Osasuna’s impressive early season form means they are just four points behind sixth placed Rayo Vallecano. They were beaten 1-0 by Atletico Madrid last time out but know a win on Monday night could put them back in the mix for a European place.

Osasuna’s early season form saw them claim some impressive wins and manager Jagoba Arrasate will be targeting a return to those performances. They have already beaten high flying Rayo Vallecano 1-0 this season while also claiming a 2-1 victory at Europa League champions Villarreal.

It has been a disappointing season for Elche, who have claimed just two wins from 14 La Liga matches. They have spent much of the first quarter of the campaign in the relegation zone but are just two points behind 15th placed Celta Vigo.

Fran Escriba’s men travel to Osasuna off the back of a 3-0 home defeat to Real Betis in their previous La Liga fixture. That was their fourth defeat in a six match winless run in La Liga.

Osasuna have the upper hand among the bookies at 89/100 with novibet while a victory for Elche is valued at 19/5 with SBK. Vbet is offering odds of 37/15 for a draw.

Osasuna have a 4-3 edge with five draws from 12 previous matches against Elche. They claimed a 2-0 victory in the last meeting between both teams back in April.

Kike and Ezequiel Avila often partner in attack for Osasuna and have scored two goals each this season. Kike is priced at 7/4 by Vbet to score anytime while Sporting Index has Avila at 87/50 in the same market.

Lucas Boye often leads the line for Elche and has found the net four times this season. Unibet has the striker at 22/5 to get on the score sheet on Monday.

There has been BTTS in three of the last four matches between Osasuna and Elche and a similar outcome is priced at 11/9 by Vbet. Two of the last three meetings have produced over 2.5 goals and a repeat could be on the cards at 6/4 with BetVictor.

There has been a goal before 10 minutes in two of the last three meetings between both teams and a repeat could be considered at 4/1 with bet365.

This La Liga match between Osasuna and Elche will be played on Nov 29, 2021 and kick off at 20:00. Check below for our tipsters best Osasuna vs Elche prediction. You may also visit our dedicated betting previews section for the most up to date previews.