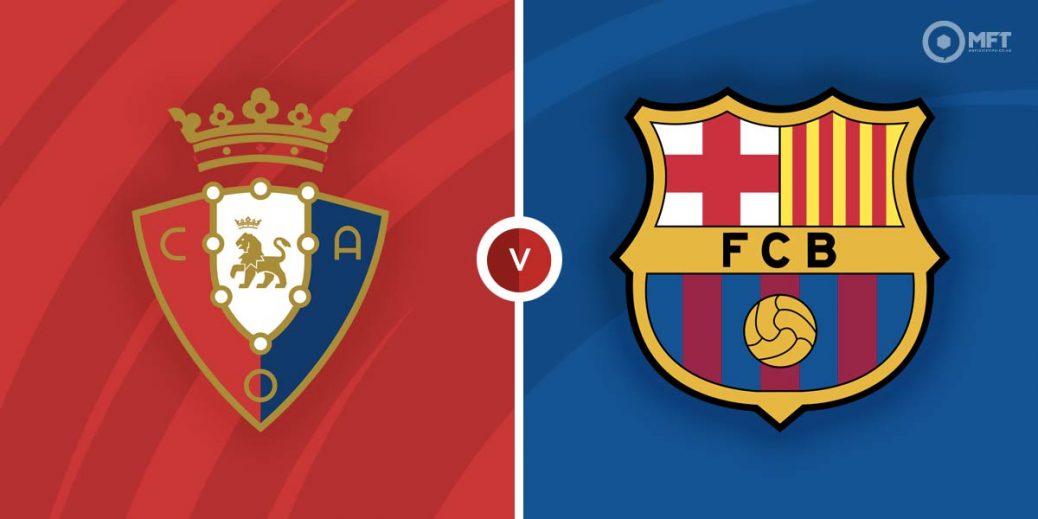 With European football on break until February, Barcelona have the chance to make amends for their UEFA Champions League exit in midweek. The Catalans will be keen to improve their fortunes in the Spanish La Liga, starting with Sunday’s clash at struggling Osasuna.

Osasuna have found things difficult in recent weeks and are only in the top half of the table thanks to a string of impressive performances in October. They are currently on a seven match winless run and were held to a 0-0 draw by struggling Levante in their previous fixture.

It has been a strange campaign for Osasuna, who are doing much better on the road than at home. They have won just once at the Estadio El Sadar while their biggest defeat of the season has come on their own turf, losing 4-1 to Valencia in September.

Another problem for Osasuna is that they are often unconvincing at the back, particularly at home. Jagoba Arrasate’s men have kept just one clean sheet in their last six matches at the Estadio El Sadar.

Legendary midfielder Xavi has made an inconsistent start to life as manager of Barcelona, who are still trying to find their best form. The Catalans have crashed out of the Champions League following a 3-0 defeat to Bayern Munich on Wednesday.

Although Barcelona are still well off the pace in La Liga, they have been slightly better on the domestic front. They have won two of their last three league matches but were beaten 1-0 at home by Real Betis in their previous fixture.

Barcelona have also been decent on their travels lately and are unbeaten in their last two away matches. They claimed a 3-1 victory over Villarreal in their previous fixture on the road.

It is not often that Barcelona are given a good price for a straight win but SBK has the Catalans at evens to emerge victorious on Sunday. Osasuna are outsiders at home at 16/5 with William Hill while a draw is set at odds of 13/5 by betway.

Barcelona often come out on top in this fixture and have won five of the last eight matches against Osasuna. The Catalans did the double over Osasuna last season and claimed a 2-0 victory in the fixture at the Estadio El Sadar.

Osasuna will be banking on strikers Ezequiel Avila and Ante Budimir, who have both been among the goals in recent weeks. Skybet has Avila at 13/5 to score anytime while betfair is offering 3/1 on Budimir in the same market.

Much of Barcelona’s attacking play goes through Memphis Depay, who is their leading scorer with eight La Liga goals this season. The Dutch striker has found the net four times in his last five La Liga appearances and could be backed to continue his scoring run at 71/50 by Sporting Index.

Barcelona have seen BTTS in their last two away matches and that run could be set for a repeat at 6/7 with SBK. Over 2.5 goals could also be on the cards at evens with bet365 while over 3.5 goals is valued at 5/2 with Unibet.

Barcelona have scored in both halves in their last two matches against Osasuna and Sunday’s clash could be tipped to follow a similar pattern at 9/4 with Skybet.

This La Liga match between Osasuna and Barcelona will be played on Dec 12, 2021 and kick off at 15:15. Check below for our tipsters best Osasuna vs Barcelona prediction. You may also visit our dedicated betting previews section for the most up to date previews.