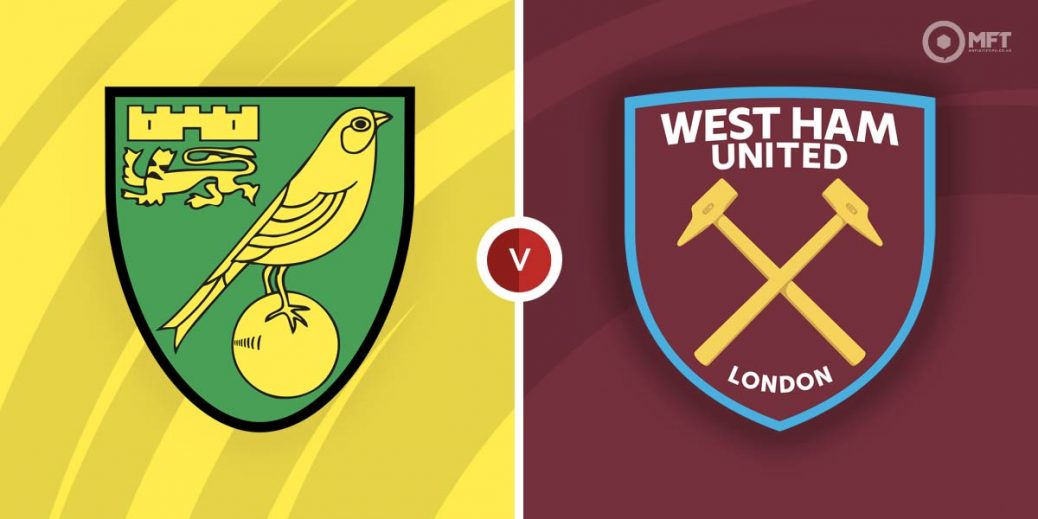 After crashing out of the Europa League on Thursday, West Ham United turn their attention to domestic matters as they continue their quest to return to the competition next season. They face already relegated Norwich City on Sunday and are expected to maintain their fine record in this fixture.

Norwich City’s relegation from the Premier League is now confirmed following their 2-0 defeat at Aston Villa last time out. The result leaves them bottom of the standings, 13 points from safety with four matches left to play.

It has been a generally disappointing campaign for Norwich City, who have claimed just five wins all season and spent most of their time rooted to the bottom of the table. They showed brief signs of life following the appointment of Dean Smith but things quickly got bad again and they head into Sunday’s clash with one win from their last 12 Premier League matches.

Norwich City will now attempt to play for pride in their final four matches and there may be some freedom and fearlessness in their play now that the worst has happened. However, the result at Aston Villa highlighted a problem that has plagued them all season, a lack of potency in attack and an inability to keep things tight in attack.

West Ham appear to be going through a rough patch at the moment as are winless in their last five matches across all competitions. They crashed out of the Europa League on Thursday after losing 1-0 at Eintracht Frankfurt for a 3-1 aggregate defeat.

David Moyes' men must now turn their attention to the Premier League and their quest to return to Europe next season. However, they are winless in their last six matches in the league and only Wolverhampton Wanderers’ poor form in recent weeks is keeping them in the top seven.

West Ham suffered a 2-1 home defeat to Arsenal in their previous Premier League fixture. They fought back from a goal down to level matters before the break but were once again breached nine minutes after the restart.

Despite all their recent problems, the bookies still have West Ham as overwhelming favourites at 11/13 with SBK. Norwich City are considered outsiders with Unibet offering 17/5 for a home win while a draw is set at odds of 27/10 by 10bet.

West Ham will be banking on a fine recent record in this fixture having won their last three matches against Norwich City. The Hammers triumphed 2-0 in the reverse fixture back in January and also claimed a 4-0 victory on their last visit to Carrow Road.

Norwich City will look to capitalise on West Ham’s defensive problems and will be banking on Teemu Pukki to provide the spark in attack. The striker has scored in three of his last four home matches and is priced at 21/10 by bet365 to find the net on Sunday.

Jarrod Bowen has carried the bulk of West Ham’s attacking threat this season and will be the one to watch on Sunday. The forward grabbed both goals in the reverse fixture and is priced at 21/10 by bet365 to once again get on the score sheet.

Norwich City and West Ham have struggled to maintain their discipline at the back lately and both teams could be backed to score at 4/5 with SBK. Over 2.5 goals could also be considered at 4/5 by Coral while over 3.5 goals is priced at 21/10 by Unibet.

West Ham have had goals in both halves in their last three meetings with Norwich City. Sunday’s clash could be tipped to follow a similar pattern at 9/5 with Unibet.

This English Premier League match between Norwich City and West Ham United will be played on May 8, 2022 and kick off at 14:00. Check below for our tipsters best Norwich City vs West Ham United prediction. You may also visit our dedicated betting previews section for the most up to date previews.