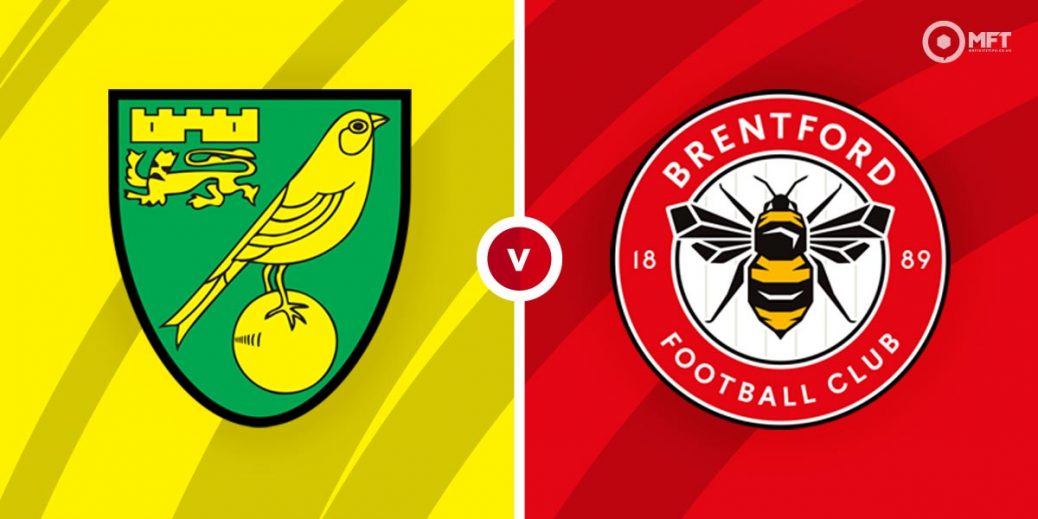 It is a top of the table clash in the English Championship as Norwich City host Brentford at Carrow Road. Both teams have set the pace in the English second tier for much of the season and are expected to serve up a thrilling encounter on Wednesday.

Norwich City have been excellent all season and are now in a strong position in the race for promotion ahead of the final 13 games of the season. They hold a seven-point lead over the chasing pack, an advantage they maintained thanks to a 2-0 victory at Wycombe Wanderers on Sunday.

The victory at Wycombe was the fifth consecutive win for the Canaries, who have looked unstoppable lately. While there has not been anything particularly spectacular about Norwich’s recent performances they seem to go about their business with ruthless efficiency.

At home is where Daniel Farke’s men seem to do their best work having failed to taste defeat at Carrow Road all season. They have won four of their last five home matches, conceding just one goal in that run.

Brentford have tried their best to keep up with Norwich and are currently holding on to second position. They have a three-point advantage over the chasing pack but must be weary of a fast-rising Watford side and Swansea who have two games in hand.

The Bees recently overcame a mini slump in their promotion quest that saw them suffer three straight defeats. They have now won their last two matches including a 2-1 home victory against Stoke City on Saturday.

Thomas Frank’s men have not been convincing on their travels in recent weeks having lost their last two matches. Both defeats were against teams further down the table with the last one a 2-0 defeat at relegation threatened Coventry.

Norwich City go into Wednesday’s clash as favourites with Unibet offering 27/20 for a home win. A win for Brentford is priced at 29/11 by Vbet while BetVictor values a draw at odds of 5/2.

Given Norwich City’s superb home form and with Brentford struggling on their travels, I am tempted to lean towards a win for the Canaries.

Norwich City have the upper hand in this fixture with eight wins from 15 previous matches. Brentford have been victorious three times while there have been four draws between both teams.

The reverse fixture at the Brentford Community Stadium ended 1-1.

Teemu Pukki scored his 18th goal of the season at Wycombe on Sunday and will once again be the one to watch for Norwich. Unibet has the striker at 27/20 to score anytime while the first goal is valued at 4/1 by the same firm.

Ivan Toney is often the go-to-man for goals for Brentford having scored 25 goals this season. Unibet is backing the striker at 6/4 in the anytime goalscorer market while also offering 23/5 for the first goal.

Norwich have kept clean sheets in four of their last five matches and are backed at 2/1 by bet365 for a similar outcome on Wednesday. The Canaries could also be worth a punt to earn a win to nil at 57/20 with Sporting Index.

Norwich have taken the lead in their last five matches and are priced at 4/5 by Paddy Power to score the first goal. They are also backed at 37/19 by Unibet to earn a halftime win.

This English Championship match between Norwich City and Brentford will be played on Mar 3, 2021 and kick off at 17:30. Check below for our tipsters best Norwich City vs Brentford prediction. You may also visit our dedicated betting previews section for the most up to date previews.