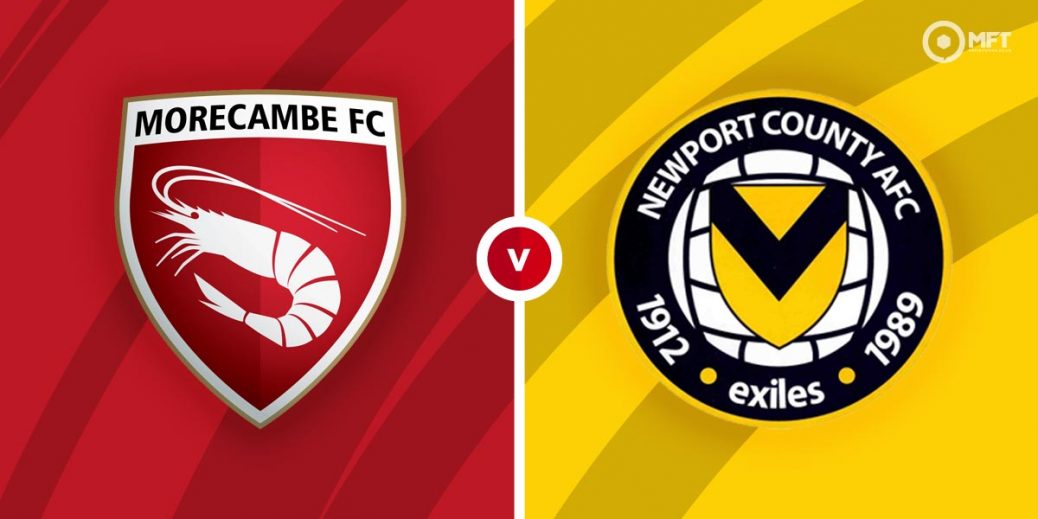 A place in English football's third tier is the prize as Morecambe face Newport County in the English League Two playoff final at Wembley stadium. While Newport can be tricky opponents, Morecambe have built up some momentum in recent weeks and should have the upper hand here.

A 3-2 aggregate victory over Tranmere Rovers was enough to see Morecambe secure a place in the playoff final. They triumphed 2-1 in the first leg at Prenton Park before settling for a 1-1 draw at home in the return fixture.

The Shrimps were in contention for automatic promotion for much of the season and eventually missed out by just one point. They have built up some momentum in recent weeks and have claimed six wins from their last eight matches.

Derek Adams' men were one of the more entertaining teams during the regular season with a 4-3 victory over Oldham and a 4-1 triumph against Scunthorpe among their recent results. However, they had the worst defensive record of all the top 10 teams and conceded in eight of their last 11 matches.

Newport County needed extra time before claiming a 5-4 aggregate victory over Forest Green Rovers in the semi-final. They suffered a 4-3 defeat in the second leg but having secured a 2-0 victory in the first fixture, they booked their place in Monday’s clash.

Mike Flynn’s men effectively denied Morecambe automatic promotion by doing the double over the Lancashire club in the regular season. They also have experience of playing in Wembley having appeared in the FA Trophy final and the National League playoff final in recent years.

However, they have been a bit inconsistent in recent weeks, claiming just four wins in their last 10 matches. They are also not as prolific as Morecambe, failing to score more than one goal in 10 of their last 14 matches.

The bookies have installed Newport County as slight favourites with SBK backing them at 8/5 to win. A victory for Morecambe is priced at 19/10 by the same firm while a draw is set at odds of 12/5 by bet365.

I am leaning towards a win for Morecambe, who are more prolific than Newport County and can outscore them on Monday.

Morecambe have a 7-5 advantage with four draws from 16 previous matches against Newport County. However, Newport did the double against the Shrimps in the regular season with the last fixture ending 3-1.

Cole Stockton and Carlos Gomes often carry the attacking threat for Morecambe with both men combining for 28 goals in the regular season. Sporting Index has Stockton at 11/5 to score anytime while Gomes is priced at 5/2 in the same market by Paddy Power.

Striker Padraig Amond scored six goals in the regular season while midfielder Matthew Dolan netted seven times and both men will be the ones to watch for Newport County. Amond is priced at 9/4 to score anytime by Paddy Power, who is offering 15/2 on Dolan in the same market.

With Morecambe and Newport County boasting quality in attack and often shaky at the back, both teams could be backed to score at 9/10 with Sport Nation. Over 2.5 goals could also be considered at 5/4 with BoyleSport, while over 3.5 goals is set at odds of 3/1 by BetVictor.

Morecambe could be tipped to score first at 6/5 with bet365 and are also likely to score in both halves at 7/2 with Sporting Index.

This English League Two match between Morecambe and Newport County will be played on May 31, 2021 and kick off at 15:00. Check below for our tipsters best Morecambe vs Newport County prediction. You may also visit our dedicated betting previews section for the most up to date previews.