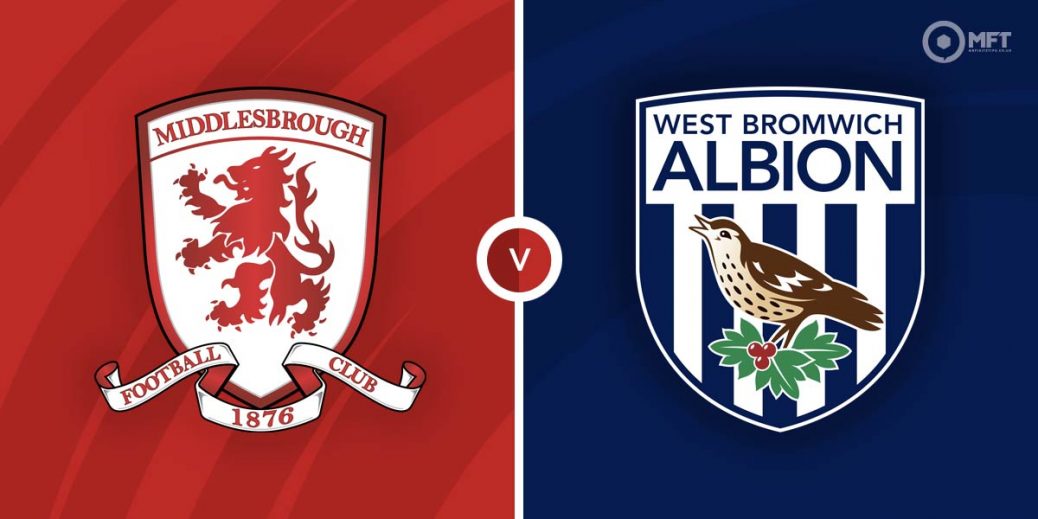 Middlesbrough and West Bromwich Albion face each other in a midweek English Championship fixture with both teams looking to bounce back from defeats at the weekend. The Baggies are aiming to snap out of a lengthy winless run but are unlikely to get any joy against Boro, who often do their best work at the Riverside Stadium.

Middlesbrough's push for a playoff place has hit a few stumbling blocks lately after claiming just two wins in their last five Championship matches. One of those barriers came last Saturday as they suffered a 2-1 defeat at Bristol City.

A closer look at Middlesbrough’s general record shows they have actually been in good form in recent months. The defeat to Bristol was only their second in the last 12 matches while they have also claimed eight wins in that run, leaving them just one point off the top six.

Chris Wilder’s men have won their last six home matches, a run that includes a 1-0 victory over high-flying Bournemouth while they also picked up a 4-1 win over Derby County in their previous fixture in front of their fans.

From challenging for an automatic promotion place earlier in the season, West Bromwich Albion have now slipped into the bottom half of the table. They have claimed just one win from their last 10 Championship matches and were beaten 2-0 at Luton Town last Saturday.

West Brom recently put Steve Bruce in charge but the manager is yet to have an impact at the club. Three games have been played since the former Newcastle United boss took charge and they are without a win or a goal in that run.

Things appear to be even worse for West Brom on their travels where they have lost their last five matches. Among their many problems is a lack of cutting edge in attack having failed to score in nine of their last 10 away matches.

Middlesbrough have the edge among the bookies and are priced at 7/5 with Skybet to win while a victory for West Brom is valued at 13/5 by Unibet. A draw is set at odds or 12/5 by bet365.

Middlesbrough have claimed three wins and one draw from the last five matches with West Brom. Both teams battled to a 1-1 scoreline in the reverse fixture back in November.

Middlesbrough have multiple attacking threats with Matt Crooks their top scorer with eight Championship goals this season. The midfielder has found the net in his last two matches and his scoring run could be tipped to continue at 4/1 with Unibet.

Boro often maintain their discipline in defence whenever they play at home and have kept clean sheets in four of their last six home matches. Given West Brom’s attacking problems, centre-backs Paddy McNair and Dael Fry will be confident of keeping another clean sheet at 2/1 with Skybet.

West Brom’s attacking problems and Middlesbrough’s solid defence at home means BTTS NO could be on the cards at 20/21 with BetVictor. Having won to nil in four of their last six home matches, Boro could be set for a similar result on Tuesday at 3/1 with Skybet.

Given the 4-1 result over Derby County in Middlesbrough’s previous home fixture, a -1 handicap for the hosts could also be considered at 9/2 with Skybet.