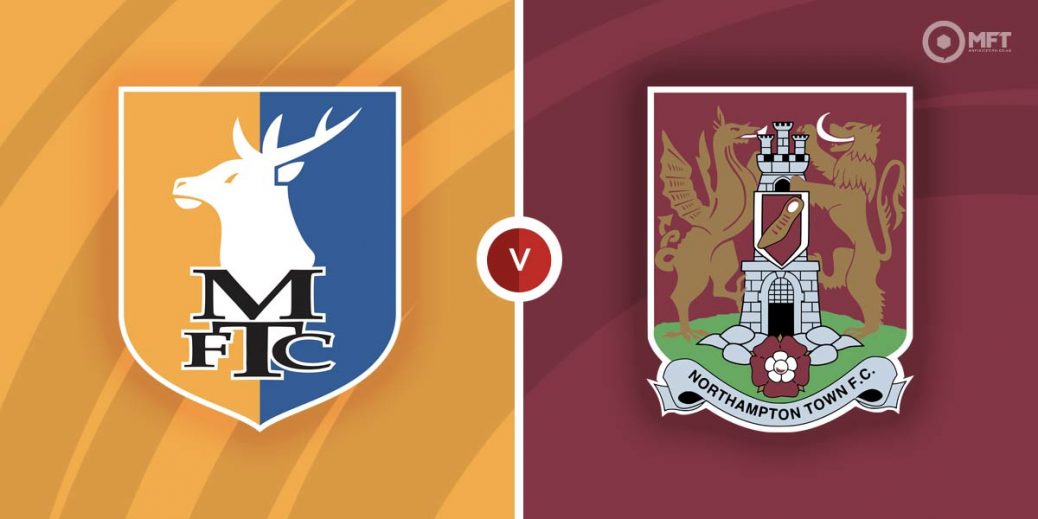 After struggling in the final week of the season, Mansfield Town will be keen to rediscover their form as they host Northampton Town in their League Two playoff semi-final first leg. The visitors have impressed lately, particularly on their travels and can earn a positive result to carry into the second leg.

Mansfield Town almost missed out on the playoffs and only just scraped through after playing out a 2-2 draw with Forest Green Rovers in their final regular season fixture. They twice took the lead through Matthew Longstaff and Jordan Bowery but were pegged back both times by the visitors.

That performance and result highlights a problem that has plagued Mansfield Town in recent weeks. Nigel Clough’s men have struggled to hold on to leads lately and head into Saturday’s semi-final first leg winless in their last three matches.

It is not all doom and gloom for Mansfield Town as they have maintained a solid home record this season. However, as the draw with Forest Green Rovers showed, they have been slightly erratic lately with a 3-2 defeat to Sutton United among their recent results at the One Call Stadium.

While Mansfield Town were struggling to find their rhythm in the final weeks of the campaign, Northampton Town were building their momentum ahead of the playoffs. They ended the regular season unbeaten in their final five matches to secure a fourth-place finish.

Northampton Town claimed four wins in that run, including a 3-1 victory at Barrow in their season finale. They made a fast start and raced to a three-goal lead thanks to a brace from Sam Hoskins and Fraser Horsfall before the hosts pulled one back.

The result at Barrow points to a fine record on the road for Northampton Town who have lost just once in their last five away matches Jon Brady’s men have claimed four wins in that run and have also beaten the likes of second placed Exeter City away from home this season.

Mansfield Town have the upper hand among the bookies with a home win priced at 23/20 by William Hill. A victory for Northampton Town is valued at 27/11 by SBK, who are also offering odds of 9/4 for a draw.

Both teams won their home fixtures during the regular season with Mansfield Town claiming a 1-0 victory at the One Call Stadium while Northampton Town triumphed 2-0 in the reverse fixture.

Jordan Bowery was on target last time out to take his tally to eight goals in the regular season. The striker should once again carry the attacking threat for Mansfield Town and is priced at 13/5 by Paddy Power to score anytime on Monday.

Sam Hoskins was one of the standout players for Northampton Town during the regular season, finishing with 13 goals. The striker has also scored four times in his last four matches and is priced at 3/1 by bet365 to find the net on Saturday.

Mansfield Town and Northampton Town have quality in attack and both teams can be backed to score at evens with Coral. There were over 3.5 goals in Northampton’s last fixture and a similar outcome is priced at 17/5 by BetVictor while over 2.5 goals is valued at 13/10 with bet365.

Both teams have been involved in a number of fast starts in recent weeks which means the first half could be tipped as the highest scoring half at 9/4 with Betfred.