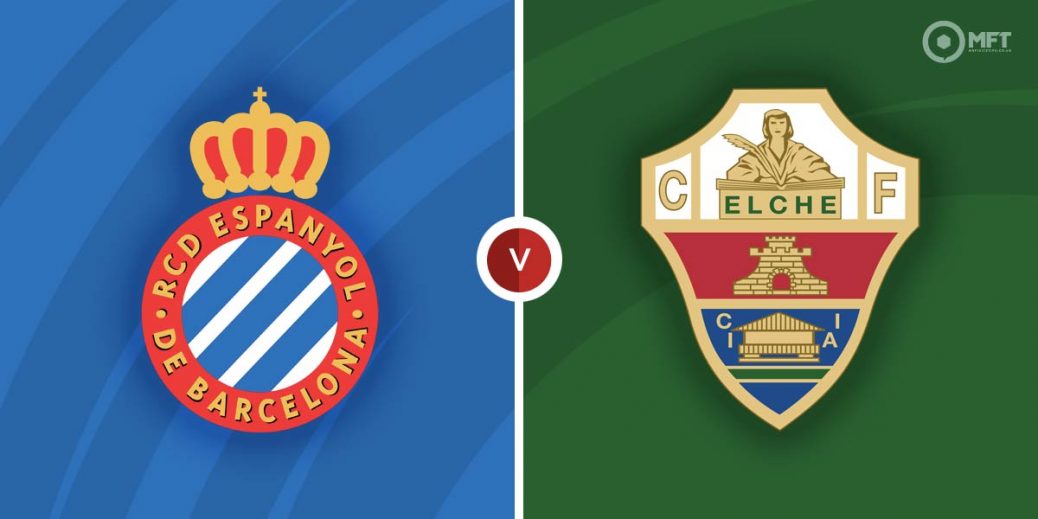 Espanyol are looking to make a push for the top half of the table as they host Elche in a Monday night Spanish La Liga fixture. Driven by an impressive home record, the Catalans should have the edge over their visitors, who are enduring a difficult campaign.

Espanyol will be pleased with their performance on their return to La Liga. Following their promotion in the summer, they have established themselves as a proper topflight team and are just one point off the top 10.

The Catalans have been in good form lately and head into Monday’s clash unbeaten in four of their last five matches across all competitions. They claimed a 2-1 victory at Valencia in their previous La Liga fixture with Raul de Tomas and Javi Puado getting the goals.

Espanyol’s campaign has been driven by an excellent record at the RCDE Stadium, where they have lost just once this season. Vincente Moreno’s men have claimed six wins and a draw from their last seven home matches in La Liga.

While Espanyol are pushing for a place in the top half of La Liga, Elche have been on a different trajectory this season. They have spent much of the season in the bottom half of the table and are only above the bottom three on goal difference.

Things do not seem to be getting better for Elche, who travel to Espanyol with just one win from their last 11 La Liga matches. Francisco Rodriguez’s men are currently on a three-match winless run in the league and were held 0-0 at home by Granada in their previous fixture.

Elche have also found things difficult on their travels and have claimed just one win away from home this season. They have also lost their last two La Liga matches on the road.

Espanyol have the edge among the bookies at 10/11 with betway while an unlikely victory for Elche is priced at 4/1 by Vbet. A draw is set at odds of 5/2 by SBK.

Elche have a 2-1 edge with two draws from five previous matches against Espanyol. Both teams battled to a 2-2 draw in the reverse fixture in October with Raul de Tomas among the goals.

Raul de Tomas is often tasked with providing the spark in attack for Espanyol and is their leading scorer this season with nine goals. The striker was on target in the reverse fixture and is priced at 7/5 with Paddy Power to maintain his fine scoring form.

Lucas Boye is the top scorer for Elche this season and has found the net three times in his last four away matches. The striker netted the opener in the reverse fixture and is priced at 15/4 with Vbet.

There were over 3.5 goals in the reverse fixture and a similar outcome is priced at 17/5 by Pari Match. Over 2.5 goals could also be considered at 13/10 with BetVictor while both teams could be backed to score at 11/10 with William Hill.

Espanyol scored in both halves in their previous away fixture and could be set for a repeat at 12/5 with Coral.

This La Liga match between Espanyol and Elche will be played on Jan 10, 2022 and kick off at 20:00. Check below for our tipsters best Espanyol vs Elche prediction. You may also visit our dedicated betting previews section for the most up to date previews.