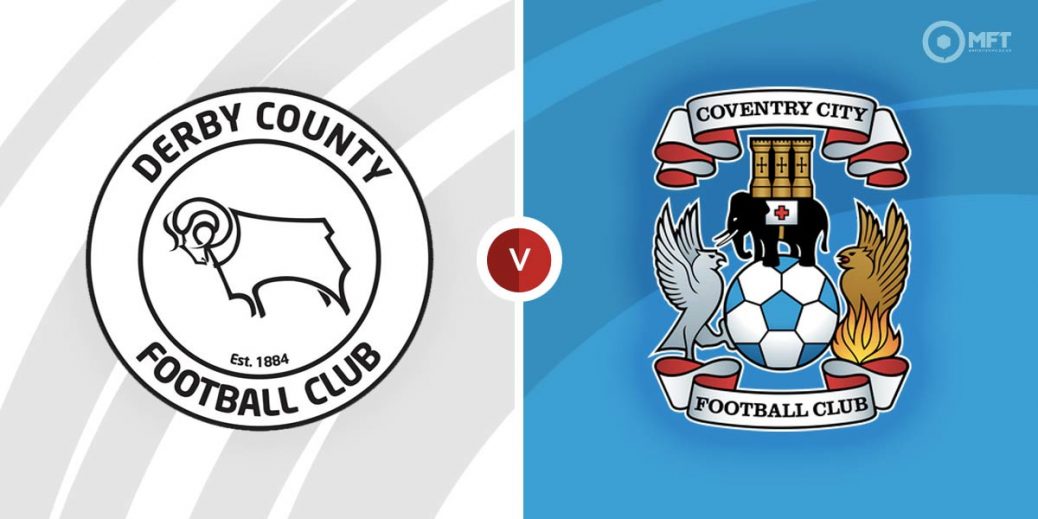 Derby County continue their push for survival as they face Coventry City in the English Championship on Saturday. The Rams have done their best work at Pride Park lately and should have the edge over an erratic Coventry side.

Derby County are coming off a 3-1 defeat at Blackburn Rovers in their previous Championship fixture. They threw away a first half lead from Ravel Morrison as a defensive capitulation saw them concede three times after the break.

Sitting six points from safety, Derby are attempting to ease themselves away from the relegation zone. However, they head into Saturday’s clash with just one win from their last six Championship matches.

The good news for Derby County is that they are returning to Pride Park where they have suffered just one defeat in their last eight matches. Wayne Rooney’s men have claimed six wins in that run, including victories over West Brom and Sheffield United.

While Derby County are fighting for survival, Coventry City have a different battle on their hands and are pushing for a playoff place. They may be 11th on the table but with just five points separating them and QPR, a top six finish remains within their grasp.

The problem for Coventry is that they have not been at their best in recent weeks and only just ended a run of three winless matches with a 4-1 victory over Sheffield United. However, they failed to build on that result and were beaten in midweek, suffering a 2-0 home defeat to Hull City.

Coventry City have also been erratic on their recent travels with two wins and three defeats in their last five away matches. Mark Robins men were beaten 3-1 by Swansea City in their previous fixture on the road.

Coventry City have the upper hand among the bookies and are priced at 13/8 by Unibet to claim the win. A victory for Derby County is valued at 39/19 by SBK while BoyleSports is offering odds of 9/4 for a draw.

Coventry City have a 23-22 advantage with 18 draws from 63 previous matches with Derby County. Both teams have met twice already this season, playing out a 1-1 draw in the reverse fixture while Coventry claimed a 1-0 victory in the FA Cup in January.

Midfielder Tom Lawrence appears to have gone off the boil in recent weeks but remains the top scorer for Derby County and is priced at 7/2 by betfair to get on the score sheet. Ravel Morrison has scored three goals in his last three matches and could also be worth considering in the same market at 27/5 with Unibet.

Much of Coventry City's attacking threat comes from Vyktor Gyokeres who is their top scorer with 13 Championship goals. Paddy Power has the Swedish striker at 21/10 to score anytime on Saturday.

Derby County and Coventry City can be backed to score at 19/20 with SBK. Over 2.5 goals could also be considered at 5/4 with Coral while BetVictor is offering 17/5 for over 3.5 goals.

Derby County have opened the scoring in three of their last four home matches and could be backed to score first on Saturday at 13/10 with bet365.

This English Championship match between Derby County and Coventry City will be played on Mar 19, 2022 and kick off at 12:30. Check below for our tipsters best Derby County vs Coventry City prediction. You may also visit our dedicated betting previews section for the most up to date previews.