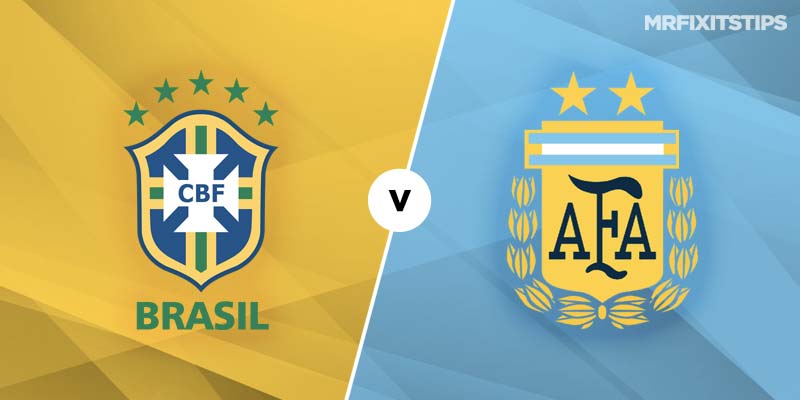 Brazil and Argentina meet for the first time since the Copa America final in a 2022 World Cup qualifying fixture at Neo Quimica Arena. Both countries look equally matched at the moment and this one is expected to be a tight encounter.

Brazil are coming off a 1-0 victory over Chile in their previous qualifying fixture. They were made to work hard by the stubborn Chileans but secured the win through Everton Ribeiro's effort midway through the second half.

La Selecao have a 100% record after seven qualifying matches and remain six points clear at the top of the table. Indeed, the Copa America defeat to Argentina is the only defeat for Brazil in their last 15 matches, a run stretching back to 2019.

Although Brazil boast plenty of quality in attack with Neymar, Vinicius Junior and Gabriel Barbosa, their good form has been built on a sturdy defence. That solid backline has seen coach Tite's men keep three clean sheets in their last four matches.

Argentina claimed a 3-1 victory over Venezuela in their first outing since clinching the Copa America title. They were comfortable throughout and raced to a three goal lead with Lautaro Martinez, Joaquin Correa and Angel Correa finding the net.

The Argentines are still unbeaten in the qualifiers, although they have drawn three of their last five matches. They will look to channel their performance from this year’s Copa America where they maintained an unbeaten record on their way to claiming the title.

Lionel Messi remains influential in attack for Argentina and will play a key role. Manager Lionel Scaloni appears to be prioritising defensive solidity in recent times. They have kept clean sheets in four of their last seven matches across all competitions and will take confidence from their shutout against Brazil in the Copa America final.

Brazil have the edge among the bookies and are priced at 19/17 with SBK to claim the win. A victory for Argentina is valued at 14/5 with Vbet while a draw is set at odds of 23/10 with SBK.

Recent matches between Brazil and Argentina have been evenly split with both teams claiming three wins apiece. The Argentines have claimed the upper hand lately with 1-0 victories in the last two meetings.

Brazil are known for their attacking quality but their defence has gotten a lot of the attention. Eder Militao and Marquinhos are likely to start in central defence for the Brazilians as they target a clean sheet on Sunday at 6/4 with bet365.

Argentina have also looked solid at the back and already shut out the Brazilians in the final of the Copa America. Nicolas Otamemdi and German Pezzella should continue their partnership in central defence and will also be targeting a clean sheet at 11/4 with Paddy Power.

Recent meetings between Brazil and Argentina have been cagey affairs with under 2.5 goals in the last five matches. A similar outcome is valued at 13/19 with SBK while BTTS NO could also be on the cards at 20/23 with betfair.

With a cagey encounter expected on Sunday, a halftime draw could also be considered at 17/16 with SBK.

This World Cup match between Brazil and Argentina will be played on Sep 5, 2021 and kick off at 20:00. Check below for our tipsters best Brazil vs Argentina prediction. You may also visit our dedicated betting previews section for the most up to date previews.