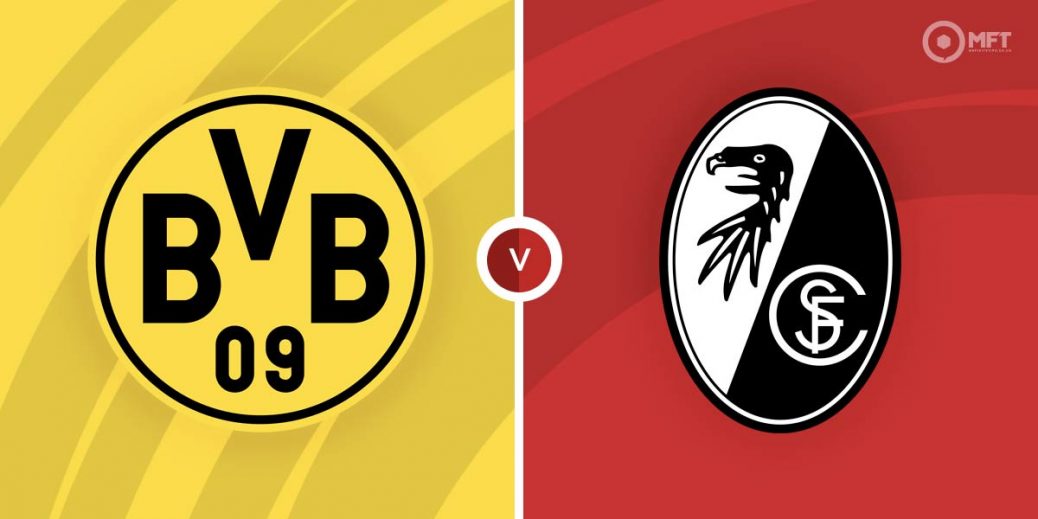 Borussia Dortmund will be looking to crank up the pressure on leaders Bayern Munich as they host Freiburg in a Friday night Bundesliga fixture. Dortmund have been near perfect at home this season and should have too much for the visitors.

Borussia Dortmund showed their character last time out in the Bundesliga as they came from two goals down to claim a 3-2 victory over Eintracht Frankfurt. After enduring a slow start, they found their rhythm midway through the second half and claimed the win through efforts from Thorgan Hazard, Jude Bellingham and Mahmoud Dahoud.

That second half performance will be pleasing to Marco Rose and the manager will be keen to use that as a springboard board for the rest of the season. Dortmund are six points off the pace and with their next fixture coming before Bayern Munich’s, they have the chance to close the gap to three points.

Borussia Dortmund have won eight of their last nine Bundesliga matches at the Signal Iduna Park.

Freiburg are coming off a 2-2 home draw with Arminia Bielefeld in their previous Bundesliga fixture. They threw away a two-goal lead from Janik Haberer and Jeong Woo-Yeong as a second half capitulation saw them settle for a share of the spoils.

Despite that result, Freiburg still have plenty of reasons to be hopeful for the rest of the season as they remain in the mix for a top four finish. However, they will need a swift upturn in form having claimed just one win from their last four matches.

Freiburg have also not been at their best in their recent travels with just one win from their last four away matches. Christian Streich’s men have suffered two defeats in that run with their last fixture on the road a 0-0 draw at Union Berlin.

The bookies have Borussia Dortmund as overwhelming favourites with a home win priced at 8/15 by bet365. Vbet is offering 9/2 for a Freiburg victory while a draw is set at odds of 7/2 by Paddy Power.

Borussia Dortmund have a 27-5 advantage with 11 draws from 53 previous matches against Freiburg. Saturday’s visitors claimed a 2-1 victory in the reverse fixture but Dortmund have won the last three meetings at the Signal Iduna Park.

Erling Haaland failed to find the net last time out against Eintracht Frankfurt but remains the top scorer for Borussia Dortmund with 13 goals. The striker was on target the last time Dortmund hosted Freiburg and is priced at 1/2 by bet365 to get on the score sheet on Friday.

Freiburg have multiple goal threats but Jeong Woo-Yeong has impressed in recent weeks and will be the one to watch on Friday. The midfielder was on target last time out against Arminia Bielefeld and is priced at 7/2 by bet365 to score anytime on Friday.

There were over 3.5 goals in Borussia Dortmund’s last fixture and Vbet is offering odds of 27/20 for a similar outcome while over 2.5 goals is priced at 4/7 with bet365. Dortmund have also scored in both halves in four of their last five matches and could be set for a repeat at 11/10 with bet365.

This German Bundesliga match between Borussia Dortmund and SC Freiburg will be played on Jan 14, 2022 and kick off at 19:30. Check below for our tipsters best Borussia Dortmund vs SC Freiburg prediction. You may also visit our dedicated betting previews section for the most up to date previews.