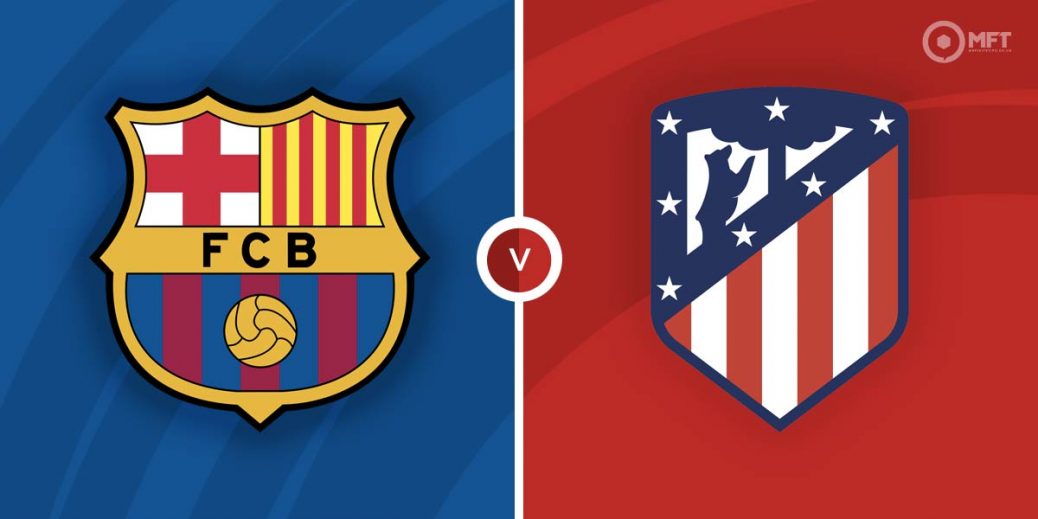 A title deciding clash in recent times, Barcelona and Atletico Madrid have fallen off this season and sit well off the pace in the Spanish La Liga. They are attempting to get their campaign back on track but look evenly matched at the moment and should cancel each other out.

Barcelona suffered back to back Cup exits, losing 3-2 to Real Madrid in Spanish Super Cup before falling by the same scoreline to Athletic Bilbao in the Copa Del Rey. They bounced back in their previous La Liga fixture, claiming a 1-0 victory over Alaves.

Despite the recent Cup disappointment, Barcelona appear to be building some consistency in the League. Xavi’s men are unbeaten in their last six La Liga matches and are just one point behind fourth placed Atletico Madrid.

It has been a disappointing title defence for Atletico Madrid, who have struggled to capture last season’s consistency. They are well off the pace on the standings, sitting 14 points behind local rivals Real Madrid.

Atletico Madrid ended a three-match winless run with a 3-2 victory over Valencia in their previous La Liga fixture. They fought back from two goals down with Matheus Cunha pulling one back before late efforts from Angel Correa and Mario Hermoso sealed the win.

One of the problems for Atletico Madrid has been the loss of their trademark defensive solidity and are without a clean sheet in their last four matches. Diego Simeone’s men have also struggled on their travels but played out a 2-2 draw at Villarreal in their previous away fixture in La Liga.

Atletico Madrid are unbeaten in the last five matches with Barcelona, claiming three wins in that run, including a 2-0 victory in the reverse fixture. However, the last two meetings at Camp Nou have ended in draws.

Memphis Depay remains a fitness doubt for Barcelona so Luuk De Jong is likely to lead the line on Sunday. The Dutch striker has three goals in his last four appearances and is priced at 15/8 by bet365 to score anytime.

Angel Correa is the top scorer for Atletico Madrid with eight La Liga goals this season. The Argentine forward has found the net four times in his last three La Liga matches and is priced at 10/3 by bet365 to score anytime.

Given the defensive problems for Barcelona and Atletico Madrid, both teams could be backed to score at 16/19 with SBK. Both clubs have scored late goals recently so the second half could be tipped as the highest scoring half at 11/10 with Paddy Power.

Both teams have been level at the break in the last three meetings at Camp Nou and could be set for a halftime draw at 22/19 with Vbet.

This La Liga match between Barcelona and Atletico Madrid will be played on Feb 6, 2022 and kick off at 15:15. Check below for our tipsters best Barcelona vs Atletico Madrid prediction. You may also visit our dedicated betting previews section for the most up to date previews.