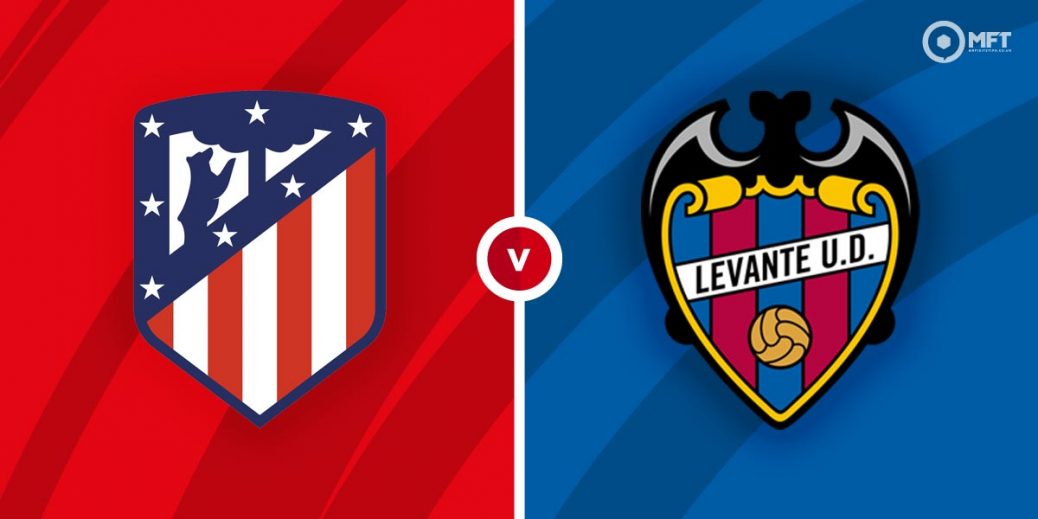 Atletico Madrid will get another shot at Levante when they square off in a Spanish La Liga clash for the second time in three days. Both teams are heading in opposite directions at the moment but battled to a 1-1 draw on Wednesday.

Diego Simeone's men are setting the pace in La Liga as they sit six points clear of capital rivals Real Madrid with a game in hand. They have looked almost unstoppable with just one defeat in a campaign that has seen their closest challengers battle with inconsistency.

Atletico were not at their best on Wednesday but still managed to avoid defeat thanks to Marcus Llorente's equaliser. The result means they are now unbeaten in their last 11 matches and look well placed in the race for the title.

Key to Atletico’s success this season has been their form at the Wanda Metropolitano, where they are yet to taste defeat. They have also conceded the fewest goals in the top flight and head into Saturday’s clash with seven clean sheets in their last 10 home matches.

Levante have been slowly slipping down the table after failing to secure a win in their last three matches. They have now slipped into the bottom half and will hope to take confidence from Wednesday’s draw.

Paco Lopez's men have an uphill task against the leaders on Saturday given their shoddy away record. They have claimed just one win in their last nine away matches, although that win did come in Madrid as they beat the champions 2-1 in January.

Levante favour a free-flowing attacking style which often leaves them exposed at the back. As a result, they have failed to keep a clean sheet in their last 11 matches in La Liga.

Atletico Madrid are odds on favourites among the bookies with SBK offering 7/12 for a home win. Despite Wednesday’s draw, Levante are priced at 32/5 with SBK while BetVictor is paying 16/5 for another draw.

Atletico have been almost invincible at the Wanda Metropolitano this season that is why a home win looks like a banker this weekend.

There have been 31 previous matches between Atletico Madrid and Levante with Saturday’s hosts claiming 18 wins. Levante have won just six times while both teams have played out seven draws.

Recent meetings have gone in favour of Atletico who are currently on a seven matches unbeaten run against Paco Lopez’s men. Results are even more one sided at the Wanda Metropolitano as Simeone’s team have won the last seven meetings.

Luis Suarez failed to find the net on Wednesday, but the Atletico striker remains the top scorer in the Spanish top flight with 16 goals. The Uruguayan does not go too long without finding the net and is backed at 5/6 by bet365 to score anytime.

The double pivot of Jose Luis Morales and Roger Marti has been as prolific as ever this season with 10 and nine goals respectively. Morales looks to be the one in slightly better form at the moment and is priced by Unibet at 19/4 to find the net.

Atletico Madrid’s excellent defence means there is a high chance they will not be breached on Saturday. With seven clean sheets in their last 10 home matches, a win to nil for the hosts is valued at 7/5 with Sporting Index.

Four of Suarez’s 16 goals this season have been the crucial first. That market could be worth a punt with bet365 backing the striker as the first goalscorer at 11/4.

This La Liga match between Atletico Madrid and Levante will be played on Feb 20, 2021 and kick off at 15:15. Check below for our tipsters best Atletico Madrid vs Levante prediction. You may also visit our dedicated betting previews section for the most up to date previews.