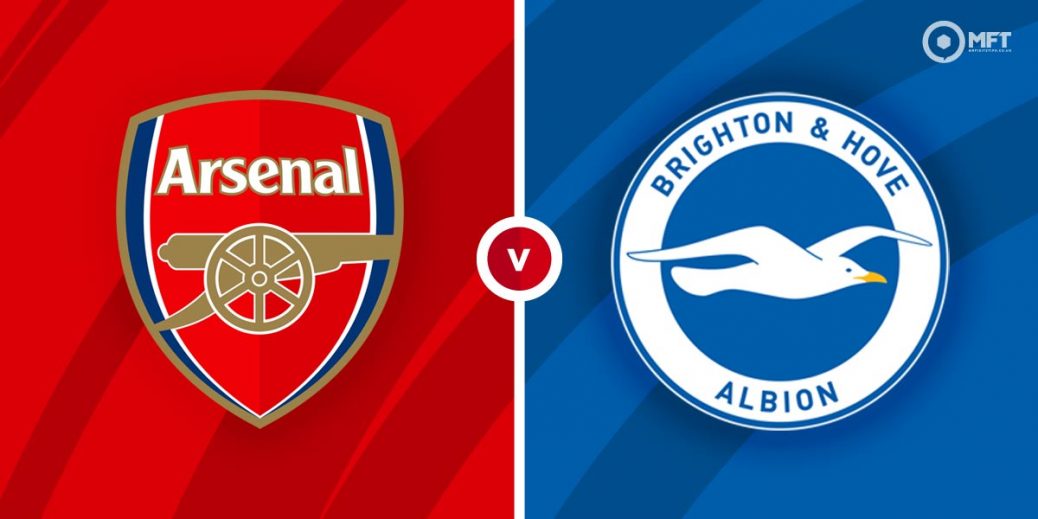 Arsenal host Brighton & Hove Albion at Emirates Stadium in their final fixture of the English Premier League season. Brighton have impressed in recent weeks and can be dangerous opponents but the Gunners appear to be ending the season on a high and should have the edge in this one.

A brace from Nicolas Pepe helped Arsenal to a 3-1 victory at Crystal Palace in their previous Premier League fixture. Gabriel Martinelli was also on target as they needed a late rally to get past a stubborn Palace team.

It was the fourth straight Premier League victory for Arsenal, who appear to be ending the season on a high. Their defence is still a worry, however, having conceded in six of their last nine Premier League matches.

Sitting ninth on the table, just one point of behind Tottenham Hotspur in the final Europa League spot, the Gunners will have to rely on others for their continental hopes. However, manager Mikel Arteta will hope to maintain his team’s momentum and put themselves in a position to capitalise on any slip from the sides above them.

Brighton will travel to the Emirates with plenty of confidence after claiming a 3-2 victory over newly crowned champions Manchester City last time out. They fought back from two goals down with second half efforts from Leandro Trossard, Adam Webster and Dan Burn earning them the win.

Having already secured safety, Brighton have played with a certain freedom in recent weeks and are unbeaten in four of their last five Premier League matches. They have knocked off Leeds United and Manchester City in that run, although both wins came at home.

Despite their recent improvement, Graham Potter's men remain unconvincing on their travels. They have lost three of their last four away matches and were beaten 2-1 by an out of sorts Wolves team in their previous fixture on the road.

The bookies have Arsenal as favourites here with SBK offering 33/50 for a home win. A victory for Brighton is priced at 21/5 by Unibet while a draw is set at odds of 7/2 by the same firm.

While Brighton are likely to find the net on Sunday, the Gunners have momentum right now and should earn the win here.

Arsenal have the upper hand in this fixture with nine wins from 17 previous matches. Brighton have claimed five victories while both teams have battled to three draws.

The Gunners earned a 1-0 victory in the reverse fixture back in December.

Nicolas Pepe has been one of the stars for Arsenal in recent weeks and has scored three times in his last three appearances. The winger also netted a brace last time out against Crystal and could be worth a punt in the anytime goalscorer market at 39/20 with Unibet.

Brighton striker Danny Welbeck also appears to be ending the season on a positive note and has found the net twice in his last four matches. He may have a point to prove against his former club and could be backed to score anytime at 10/3 with Paddy Power.

With Arsenal and Brighton often unconvincing at the back, there are likely to be goals for both teams at 19/20 with Sport Nation. Over 2.5 goals could also be on the cards at 6/7 with SBK while over 3.5 goals is set at odds of 85/40 with BetVictor.

Arsenal could be backed to earn a win and over 2.5 goals at 6/4 with bet365. The Gunners are also likely to score in both halves at 13/8 with William Hill.