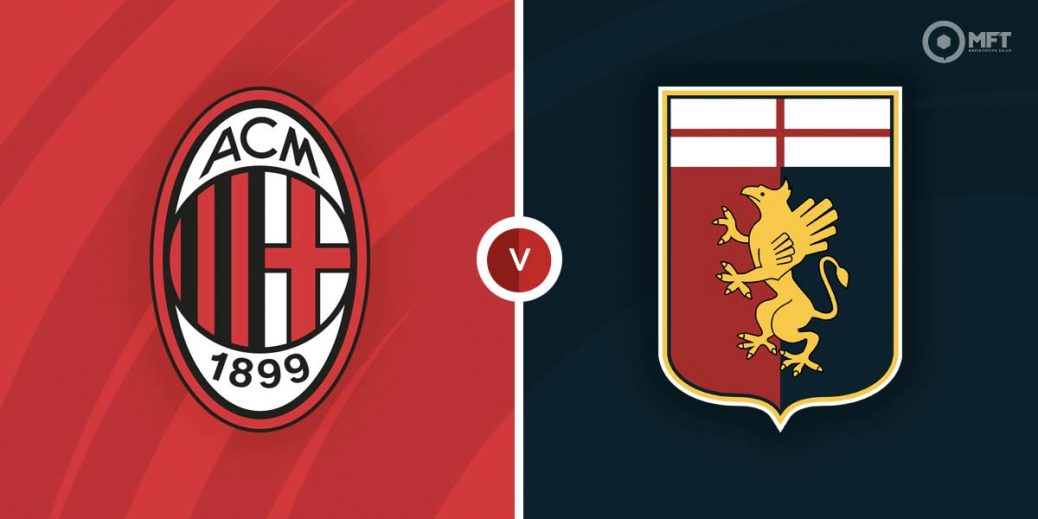 Following a few stumbles in recent weeks, AC Milan will be desperate to get their Serie A title charge back on track. The leaders have dropped points in their last two matches and will look to make amends when they host struggling Genoa on Friday.

AC Milan are going through a difficult time at the moment, failing to secure a win in their last two matches having faced teams in the bottom half of the table. First, they were held to a 0-0 draw by Bologna before playing out another barren draw at Torino last time out.

Those two results mean AC Milan’s lead at the top has now been cut to one point by champions Inter Milan, who have played a game less. Manager Stefano Pioli will be keen to take the positives from recent outings as they are unbeaten in their last 10 Serie A matches.

Another positive for AC Milan is their recent defensive record having kept clean sheets in their last five Serie A matches. They have also maintained a similar record at the San Siro with just one goal conceded in their last five home matches.

It has been a generally difficult campaign for Genoa this season. They have claimed just two wins this term and are currently second from bottom.

Sitting three points from safety, there appears to be no respite for Genoa as they continue to look increasingly doomed to take the plunge into Serie B. They have lost their last two Serie A matches and were beaten 4-1 at home by Lazio in their previous fixture.

Genoa also have one of the worst away records in Serie A having claimed just one win on their travels all season. Alexander Blessin’s men suffered a 1-0 defeat to Verona in their previous fixture on the road.

The bookies have AC Milan as overwhelming favourites with a home win priced at 7/20 by Unibet. An unlikely victory for Genoa is valued at 11/1 by BetVictor while a draw is set at odds of 41/10 by SBK.

AC Milan often come out on top in this fixture and have already beaten Genoa twice this season. They claimed a 3-0 victory in the reverse fixture and also knocked the visitors out of the Coppa Italia after a 3-1 extra-time victory.

AC Milan’s defending has been one of the positives in the midst of their struggles as they have not conceded in their last five matches. Pierre Kalulu and Fikayo Tomori have been pivotal to their recent showings at the back and can lead the Rossoneri to another clean sheet at 3/4 with BoyleSports.

At the other end of the pitch, AC Milan will be looking to Olivier Giroud and Rafael Leao to rediscover their scoring touch with both men on target in the last meeting with Genoa. Bet365 has Giroud at 4/6 to get on the score sheet while SBK is offering 11/8 on Leao in the same market.

Driven by a solid defence, AC Milan are expected to come out on top on Friday and could be tipped to earn a win to nil at evens with BetVictor. Given the one-sided result in the reverse fixture, a -1 handicap could also be considered for the Rossoneri at evens with Coral.

AC Milan have also scored in both halves in two of their last three matches with Genoa and could be set for a repeat at 59/50 with Unibet.

This Serie A match between AC Milan and Genoa will be played on Apr 15, 2022 and kick off at 20:00. Check below for our tipsters best AC Milan vs Genoa prediction. You may also visit our dedicated betting previews section for the most up to date previews.