LEICESTER delivered the easiest of wins last night by banging in four goals at Sheffield United to land Bet Number 7 in my current £10 – £1,000 Challenge.

I'd tipped the Foxes to score two or more so was pleased that they racked up the necessary goals early in the second half. That took our running total to a tidy £184.23.

Tonight I'm hoping for a similar performance from another Premier League side against lower league opposition. West Ham haven't enjoyed the best of starts to their league campaign but there's more to come from this Hammers side this season.

Two defeats in two matches has put boss Slaven Bilic under the spotlight and he could do without the embarrassment of an early exit in the Carabao Cup at the hands of League Two Cheltenham. Although he'll make changes I still expect the Hammers to progress and again I'm backing goals.

As ever we'll take the best odds available and tonight those are at Boylesports who go 2/5 on West Ham to score two or more. 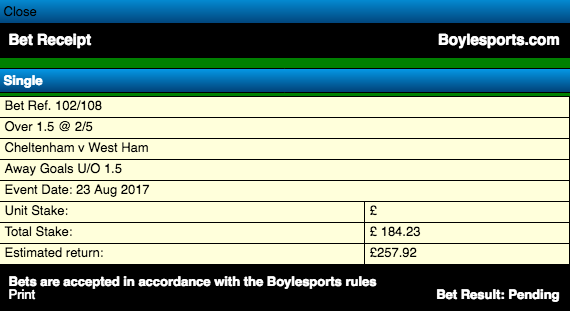 My Betting Club is for Gold Members only. Each week I try to undertake the challenge of winning as much as I can, starting with £10. If I reach £1,000 or 7 days of wins a row in I'll cash out and bank the winnings. Once a year all the winnings will be divided among selected Gold Members. After every loss the club will resume the following Monday or Tuesday.