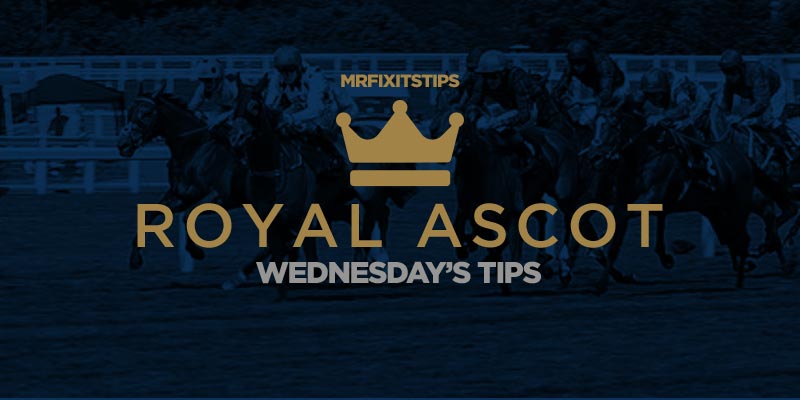 A winner and two placed horses made it a profitable start to the Royal Ascot Festival by RizzelTips on Tuesday and he's back with his top of the pops for Day Two.

There are a few in this race I like the look of, but I was to whittle it down to the one selection it would be ALTERNATIVE FACT.

His return to the track 10 days ago was a more than satisfactory performance based on how the race unfolded. De Sousa had him tucked away on the rail and was travelling beautifully through the race but had no gaps. He then put on the brakes and took the horse to the back of the field to get a clear run, but at that point it was too late and he cruised through the field to finish 6th on the bridle.

This horse has recently been running over slightly further than a mile, and has a win over 1m 2f, but this will not be a negative when he drops back to a mile. With the ground riding on the slower side of good, it places more emphasis on stamina, which Alternative Fact has, as he has run decent enough races over 1m 4f. He handles the soft ground, and with Frankie Dettori booked, connections must feel they have a really nice chance.

He is drawn near Zhui Feng, who should make the pace on his side of the field, and I hope he can run on late.

When I first looked at this race, it looked quite tricky as there a lot of question marks around the horses in the field. On recent form you would have to say Juan Elcano has the best chance, but I am not sure about the quick turnaround with this horse. He ran four times last year, but there was a month gap in between each run, so I think this race could come too soon for him, having only ran 11 days ago.

First Receiver is the current favourite and based on what we have seen of him so far, he is far too short in the market. He has some decent form tied in with horses last year, and his latest win was visually impressive, but at 5/2 or shorter he is too short.

RUSSIAN EMPEROR is the one to side with. His return was pleasing, and, in most seasons, Aidan O’Brien’s horses come on for the run, and if that is the case then he is nice odds. Though he was a beaten fav lto, the horse which won was no slouch, as he was a couple lengths behind Mogul last year. Iberia who finished 3rd in the Leopardstown race has good form as well, who finished 3rd in a Group 2 at Newmarket, running behind Kameko & Royal Dornoch, with Year Of The Tiger back in fourth. So Russian Emperor has a decent level of form, coming in front of a good yardstick.

On paper there seems to be a lot of horses who are well handicapped and could be well in front of the handicapper. A couple to mention would be Kipps, Win O’Clock & Bodyline, but the market has already spotted this, and they have all been backed accordingly. But one at bigger odds which could run a big race is SUBJECTIVIST, for Mark Johnston.

This horse was heavily tried in his juvenile season, and was tested at patent level, where he ran with a great amount of credit. He has finished behind the likes of Pyledriver, who won the Group 2 King Edward VII Stakes today. Tammani who finished third in the race at Haydock behind Pyledriver has since finished 0.75lengths fourth in a Group 3 and won a Listed race in France by 4lengths.

His second in the Class 1 Listed race at Yarmouth behind Mohican Heights is also a nice piece of form, with the winner finishing third behind Pyledriver today at Ascot. In the Yarmouth race, Berlin Tango finished behind Subjectivist. That horse has since won a Group 3 at Kempton, beating Pyledriver. A lot of this form is interlinking, and it is a great piece of form.

The step up to 1m 4f should suit based on his pedigree, as he is a half-brother to the smart staying horse, Sir Ron Priestley. If he's anything like his half-brother then he should have a great chance tomorrow at massive odds. Ryan Moore is a cracking jockey booking, and Mark Johnston has a great record in this race, having won it 7x.

A simple NO BET in this one for me. Japan is currently odds-on, and I could not be touching him at those odds, based on the fact that he could need the run like in previous seasons.

If the rain arrives then Addeybb is a live contender, but I couldn’t take a bet on him as he is pretty reliant on soft ground, which we do not know if we will get that or not.

Headman is a Group 2 winner from last season, and probably has a nice chance in this race if he is fit for it. I still have question marks whether he is a Group 1 performer.

Barney Roy is the interesting runner, who returned to racing after flopping at stud, when finding out he was infertile. Since then he has run brilliantly for Charlie Appleby, winning two times at Meydan. He tries 1m 2f for the first time tomorrow, but I do not think that his form is up to scratch.

With only two places on offer, this is just a watch for me.

Yet another tight handicap to call, but I am siding with last year’s winner of this race, AFAAK. He has run twice in this race finishing runner-up and first. It is a race which he has been targeted at in recent years, so I see no difference for this season. Charlie Hills’ yard is flying at the moment, having Battaash winning today, and Equilateral finishing behind him.

It is not a surprise to see Jim Crowley opting for John Gosden’s progressive horse, Alrajaa, who has been mightily impressive on the AW over the winter. This means that young Cieren Fallon takes the ride on Afaak and takes off a crucial 3lbs. Though he lacks big race experience, he is still a quality operator based on the amount of time he has been riding and taking 3lb off will help massively.

The time off the track does not bother me in slightest as he won this last year from a 200+ day layoff, so I imagine Charlie will have him 100% fit for this. There is not much predicted pace in this, so the fact that Afaak sat towards the front of the field last year could prove to be advantageous if they use the same tactics.

Simple NO BET in this race for me. Too hard to compare form, and you are basically going off one run for all horses.

A lot of potentially nice horses but trying to find which ones are precocious and ahead of the pack is extremely hard.

Even though this race has 16 runners, I do not think it is as competitive as the other handicaps that have already been. Not many horses catch my eye, but I like the look of FUJAIRA PRINCE.

Roger Varian’s lightly raced 6yo makes a return to the track after 362 days. The last time he raced was at Royal Ascot last year where he finished third, behind Baghdad over 1m 4f. This trip of 1m 6f looks to suit, and I get the impression this race has been the target for a long time now. The time off the track does not bother me in slightest, as Roger is a top trainer who does not rush his horses and he will have him spot on for this.

If the rain arrives, a horse which could go close is Ranch Hand. He ran well in handicaps last year and thrived on soft ground. He looks to be on a good handicap mark, and I think he will be the main danger to Fujaira Prince.