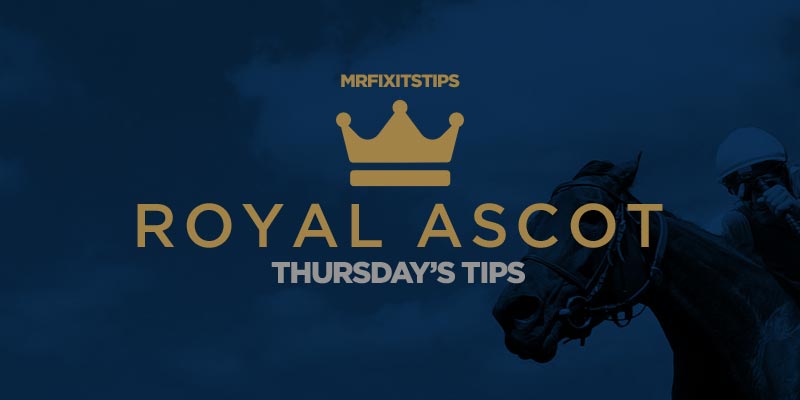 AFTER a sparkling Wednesday at Royal Ascot (2 winner, 3 placed) RizzelTips has some more big priced fancies that can secure us some profit for Day Three.

HIGHLAND CHIEF is the horse to be on in this race in my opinion.

He will need to be much better than a mere handicapper to win this as he is running off a rating of 101, and top weight of 9st 7lbs.

He is tackling this trip for the first time, and his pedigree suggests it will suit. He is by Gleneagles and out of a Dam who stayed 1m 4f + so there should be no doubt about his stamina.

His race fitness will have to be taken on trust as he has not had a run this season so far, but he did have some smart form from his 2yo season. He was placed at Royal Ascot last year behind Pinatubo and Lope Y Fernandez. He then disappointed when running over a mile at Newmarket in the Royal Lodge Stakes, but I am prepared to forgive him for that run. Paul & Oliver Cole have opted to apply the cheekpieces for the first time, which could bring out further improvement.

There are some potentially well handicapped horses in this field, so playing EW on Highland Chief is the better option if you are siding with this selection.

There are only a few in this race which catch my eye, and all three are to the fore of the market, this being Fox Tal, Sir Dragonet & REGAL REALITY.

It is very interesting that Cheveley Park & Sir Michael Stoute have decided to geld this son of Intello. Over the years, we have seen the potential this horse has, but he can lose his race before it even begins.

On multiple occasions last year, he boiled over on the way to the stalls, and they have tried different tactics like walking him around the entire track at Sandown last year, before getting him to the stalls. But when he is on a good day, he is very talented and has some good form behind quality horses. He finished 2.75 lengths behind Enable & Magical last year. In August he finished behind Japan, Crystal Ocean and Elarqam which is Group 1 level form, and this is a Listed race so to see him 9/2 is good to see, as I think that is tremendous value.

The reason why I opt for Regal Reality over the other two I have mentioned, is based on the gelding operation which will hopefully settle him better and allow him to showcase his real talents.

This looks like a cracking renewal and there are plenty of horses who are better than Group 3 level, which makes it quite difficult to choose.

King Leonidas brings the unexposed side to the table, having only raced two times and winning on both occasions. He will be short in the market due to the combination of Gosden & Dettori, who always attract market support and at short odds I think there are better alternatives which have a more solid form.

Monarch Of Egypt will be popular as he was blocked a run in the Irish 2000 Guineas, but when he came over to England last year, he was very poor on both occasions. Celestin brings the French 2000 Guineas form, and I am not totally convinced that it stands up to British form.

I like the look of the only filly in the race, FINAL SONG. Based on official ratings she will have to improve massively, but the fact she has a rating of 98 is quite surprising as she ran well in the 1000 Guineas and had form in Group 2 races last year. The drop to 7f looks to be suited for her, she ran well for a long way in the Guineas but was found out in the last furlong by horses who have greater stamina. Last year she campaigned primarily as a sprinter, finishing closely behind Raffle Prize & Daahyeh which is a great piece of form. She gets the 3lb weight for sex allowance which will aid her cause, and she could be the value pick of the race.

Though Stradivarius looks the banker of the week, you would have to be crazy to back him at 4/7.

You can call me crazy because I fancy the chances of MEKONG to potentially outrun his odds of 50/1!

I get the feeling this marathon trip of 2m 4f will be right up his street. Since he moved stables from Sir Michael Stoute to Jamie Osbourne’s he has run two very nice races. The run at Riyadh in the Longines Turf Handicap, he finished behind a horse called Call The Wind. On that day, Jamie Spencer, did what Jamie Spencer does, which was holding the horse in the rear of the field and running on late. He did his best work late on and I get the feeling that the extra half a mile will bring out further improvement.

He finished fourth on Champions day behind Stradivarius, which was a decent enough run, and on that day he was in front of Withhold, and he has already been in front of Prince Of Arran, so to see those horses shorter in the market seems strange. I am not by any means saying Mekong will win, but I definitely feel like he could outrun his odds and get a place.

Yet another tricky handicap, and I am siding with Frankie and John Gosden, as I think VERBOTEN is well handicapped.

He was campaigned quite strangely last year, as Gosden horses go, as he was tried in a Group 1 on his second run, which is something which Gosden does not do very often. The fact he did that makes me think that this lad shows a lot at home, and he still has not brought it fully to the track.

He raced at Lingfield for his seasonal reappearance, where he raced towards the rear, and went five horses wide around the bend, and ran on with promise into fourth. That run can be marked up in my opinion, due to the fact he did not have an ideal race, and this straight track should suit him better.

Frankie is back on board, which is always a positive, taking over from Rab Havlin. Returning to a mile will see him in a better light as he was a strong stayer over 7f, and he is drawn in the high stalls which has been a huge positive in the handicaps so far. There is a lot of pace drawn around him, which should allow him to get a tow into the race and pounce late.

I did like the look of Starcat, but he is drawn in 1 which seems a huge negative, but he is also unexposed, and I would not put anyone off backing him as well.

Another tough race, and I am siding with a horse who is drawn in stall 1 which looks a huge negative, but the odds have persuaded me to give him a chance. ONASSIS is the horse I like the look of, and the combination of Haley Turner & Charlie Fellowes won this last year.

Rather Be won this race last year off 8stone, and this year they have Onassis running off 8st 1lbs, which gives me the feeling this has been the long-term plan.

When trying to pick a horse in this type of race, you are wanting to find the horse which is best handicapped, and that would definitely be African Dream who is running off a 16lb lower mark than he will be doing in the future. The problem with that horse is that he is 7/4 in a tightly competitive handicap where not everything can go to plan, so that is why I think it is best to look elsewhere.

Most of the pace angles are drawn high which is also a negative to Onassis, but he is drawn next to Declared Interest who has run from the front on some occasions. At odds of 20/1 or so, I think playing a small EW bet on Onassis could pay dividends.