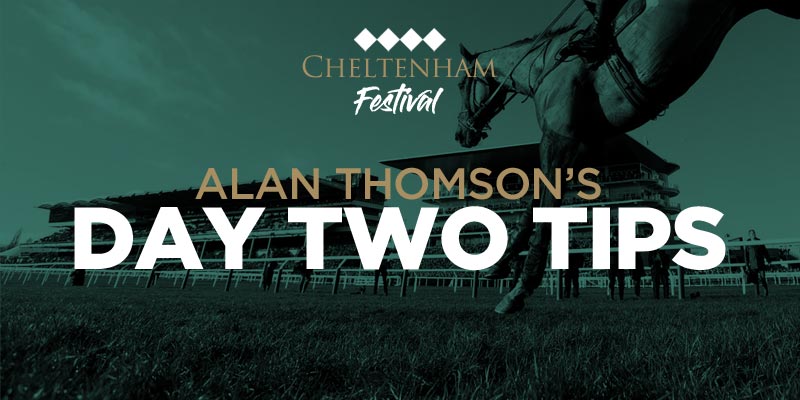 Day Two of the Festival could succumb to the weather but Thommo presents his best picks for the planned seven races.

BATTLEOVERDOYEN (1.30) can extend his unbeaten record in the opening Ballymore Novices’ Hurdle. Gordon Elliott’s gelding arrives at Cheltenham with a tall reputation, his latest success coming in a Grade 1 at Naas when sent off favourite.

The stable sent out Samcro to win this event last year and Battleoverdoyen should have the measure of home favourite Champ, another horse with a string of 1s next to his name. His victory in the Challow Hurdle at Newbury at the end of a December doesn’t look quite so hot now, however, with runner-up Getaway Trump looking laboured at Kelso earlier this month.

Brewinupastorm fell at the last when just getting the better of Birchdale and could turn round Newbury form with Champ now given a sterner stamina test.

There are certain to be more upsets on this searching ground and, as yesterday proved, don’t be afraid to back outsiders each-way if you fancy their chances. Most bookies are offering generous terms.

DELTA WORK (2.10) was put up a few weeks ago for the RSA Chase but I’m not quite so confident he can beat off Santini, the horse most likely to act in the mud. Delta Work, winner of last year’s Pertemps Network Final Handicap Hurdle, has taken brilliantly to fences, taking the notable scalp of Le Richebourg at Fairyhouse in early December.

Santini hasn’t enjoyed a smooth prep but is a smart horse. Nicky Henderson’s gelding was given a lot to do when a staying-on third to Kilbricken Storm in the Albert Bartlett 12 months ago and rates a big danger if all is well.

URADEL (2.50) has been burning a hole in my Cheltenham notebook for several weeks and, from a choice of engagements, Willie Mullins has opted for the Coral Cup. The Cesarewitch runner-up seems hardly overburdened with 10st 10lb on his back and Ruby Walsh gave Uradel a considerate ride at Leopardstown when running on from the rear. Mullins fields six in the race but Walsh has stayed loyal to his mount.

Brio Conti edged out Honest Vic at Ascot, with last Saturday’s Imperial Cup heroine Malaya six lengths adrift in fourth, and looks sure to be involved for Paul Nicholls and Harry Cobden. Further up the weights, it’s not hard to envisage a prominent showing from tough Vision Des Flos.

The Gigginstown horses didn’t fire yesterday but Farclas and Cracking Smart are well worth a second look at double-digit odds.

ALTIOR (3.30) would appear to have the Betway Queen Mother Champion Chase at his mercy once again and it’s a race to sit back and enjoy unless you fancy an outsider to run into a place.

TIGER ROLL (4.10) will be hard to topple in the Glenfarclas Cross-Country Chase and rates a banker in many books. Again, there is plenty of scope for each-way alternatives and last year’s runner-up Urgent De Gregaine is trading at quite a big price.

The Irish may well have a stranglehold on the Boodles Juvenile Handicap Hurdle, previously known as the Fred Winter, and Joseph O’Brien’s BAND OF OUTLAWS (4.50), a smart sort on the Flat who has taken well to the obstacles, could be the one to beat. That man Gordon Elliott produced a 33-1 shock last year with Veneer of Charm, ridden by stable jockey Jack Kennedy, and he rides Coko Beach in the same colours.

Significantly, perhaps, Davy Russell takes the mount on another Elliott entrant Lethal Steps, running in the Cheveley Park Stud colours (also on Chief Justice) which adorned the winner’s circle yesterday with big gamble A Plus Tard. Lethal Steps has cheek-pieces for the first time.

ENVOI ALLEN (5.30) also dons their distinctive red silks and white sash and defends an unbeaten record for the Elliott yard. Envoi Allen gave 3lb and a beating to Meticulous at Leopardstown when racing wide off the home bend and should confirm that form. Another Elliott entry, Abacadabras, was running a big race, but looked held, when crashing through the far rail inside the final furlong at Leopardstown and is open to improvement.

There’s any number of unexposed sorts in the 14-strong field and Blue Sari could hardly have won any easier in the McManus silks at Gowran Park. Nicholls-trained Ask For Glory could be best of the home team.