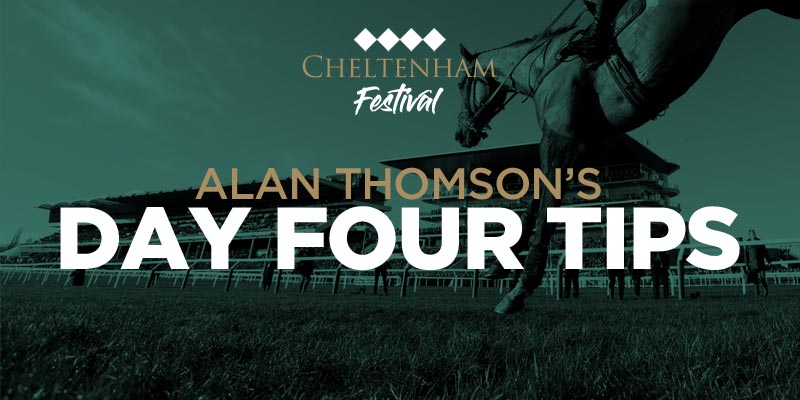 THOMMO followed up his FOUR winners on Wednesday with another THREE on Thursday, let's hope he can end the Festival in similar style.

SIR EREC (1.30) will be popular in doubles and trebles as he looks a class apart in the JCB Triumph Hurdle. After winning a Listed event on the Flat at Limerick (soft) last October, Sir Erec was sent to Ascot on Champions Day.

Quite well supported in the market, he finished an honourable third to Stradivarius and the son of Camelot has won both his races over hurdles for Joseph O’Brien. Gardens Of Babylon is the second-string of JP McManus and may get closer to Sir Erec wearing first-time cheek-pieces.

WHISKEY SOUR (2.10) led at the final flight before finishing third in last year’s Randox Health County Handicap Hurdle and should again be in the shake-up under Ruby Walsh.

Monsieur Le Coq may have gone to the front too soon before being reeled in by Malaya in last Saturday’s Imperial Cup and regular rider Lizzie Kelly is now back on board. The five-year-old is at the right end of the weights and should go well.

The Albert Bartlett Novices’ Hurdle is no place for the faint-hearted and COMMANDER OF FLEET (2.50) has looked a tough nut in winning three of his four races for Gordon Elliott and edged out Rhinestone in a Grade 1 at Leopardstown last month.

Derrinross is on a hat-trick and likes to grind it out from the front, while Rhinestone is 2lb better off with Commander of Fleet and must come into the reckoning.

Best of the home team may be the Rebecca Curtis-trained Lisnagar Oscar, second to Rockpoint here in mid-December before racking up victories at Chepstow and Haydock.

The eight-year-old is unbeaten in two runs at the Festival, landing the 2017 Pertemps Network Final Handicap Hurdle and strolling home in last year’s RSA Chase. Much has been made of Presenting Percy’s light campaign, having scored over hurdles on his only seasonal start at Gowran Park, but he has always gone well fresh in the past.

Native River will be favoured by any rain and was a very game winner from Might Bite 12 months ago. His preparation has gone smoothly and he must be in with a big shout, although the strong wind has been drying out the track.

UCELLO CONTI (4.10) has discovered a new lease of life for Gordon Elliott and is unbeaten in 2019.

The 11-year-old ran sixth in the 2016 Grand National so stamina is not an issue in the 3m 2f Foxhunters’ Chase. Stand Up And Fight represents the strong Enda Bolger and JP McManus team.

MAGIC SAINT (4.50) had pace-making Gino Trail in his grasp from a long way out at Wincanton and a 7lb rise isn’t insurmountable in the Johnny Henderson Grand Annual Challenge Cup. He remains quite unexposed for Paul Nicholls and is the likely favourite.

Whatswrongwithyou is progressing with every run and he is Nicky Henderson’s sole representative in the race named in honour of his father.

DALLAS DES PICTONS (5.30) has the potential to become a huge last-race gamble in the 26-runner Martin Pipe Conditional Jockeys’ Handicap Hurdle as he was an impressive winner on his handicap debut and remains unexposed for the Elliott yard.

The Irish looks like dominating and Jessica Harrington’s Discordantly makes his handicap debut after three solid runs in maidens. He wasn’t beaten far by Fakir D’oudairies at Cork in January and has gone fairly close in his last runs in huge fields.