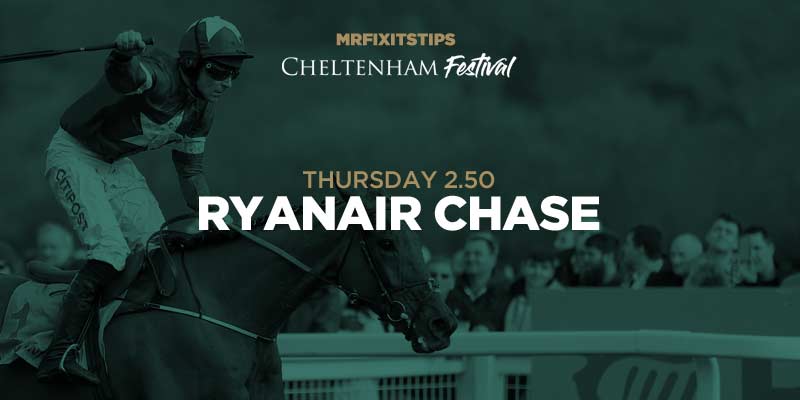 Inaugurated in 2005, the Ryanair Chase was one of several races added to the Festival when it expanded from three days to four.

IF I'm being perfectly honest the Ryanair often disappoints in terms of quality and strength in depth but I think this year we could be in for a real treat.

Last year's winner Frodon lines up again but his Irish challengers in particular are mouthwatering, so much so that Frodon is third fav and backable at almost an each way price.

That would probably be a sensible thing to do for the snide each way punters because I can’t see him out of the top 3 with his course and distance form but I am going to have to come off the fence and pick the winner.

For me, the winner has to be MIN who I watched in the flesh last year on the Friday at Aintree in what was an unbelievable performance over this sort of trip.

He arguably is better over this trip than 2 miles where he has run with credit in the pass and has to be the win bet here for me.

This is a big test for A Plus Tard in my book and he is too short in the betting whilst a gruelling race last time out for Ridersonthestorm may have left its mark.

I can see Min and Frodon battling it out up the hill.

A PLUS TARD (3.30) looks nailed-on to run a huge race in the Ryanair Chase.

His form is rock-solid and Henry de Bromhead’s star turn showed his liking for Cheltenham when hosing up in last season’s Close Brothers Novices’ Chase.

Min has kept running into Altior at the festival and has never been disgraced in defeat.

He seems better at 2m 4f these days and should go well along with last year’s highlight winner Frodon and Bryony Frost.

This race is probably a match between Min and A PLUS TARD, and I favour the latter to finish victorious.

His latest win at Leopardstown over 2m 1f was a cracking performance, where he beat Chacun Pour Soi, who was one of the major fancies in the Champion Chase before being pulled out this morning.

A return to 2m 4f around a track which he’s won at previously will suit him better.

Last year he won at the festival, when winning the Close Brothers Handicap by 16 lengths. Since then he’s taken his form to a whole new level, and I am confident he’ll find the improvement he needs to win this tomorrow.

Min is a strong contender in this race, and he’s a better horse over 2m 4f, so the fact he was beaten by Chacun over 2m isn’t surprising. He’s the proven class horse in the race, shown by winning the Grade 1 JLT Chase at Aintree by 20 lengths, beating Politologue (won Champion Chase earlier today).

Frodon won this race last year, but I think this race is a lot stronger than last year, and he lacks the same level of ability.

Aso could fill the places behind A Plus Tard and Min.