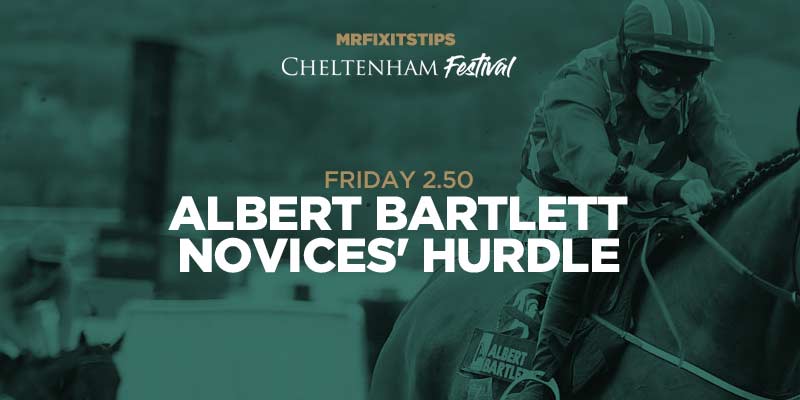 DEAD easy this one for me.

I tipped up RAMSES DE TEILLEE on the Gambla Racing podcast last week and he is still my solid recommendation for this race.

It’s a race where they go a pretty strong pace for the full 3 miles and it needs a real staunch stayer to be there at the end.

Ramses is a bit older and much more experienced than most of these being a Len established chaser now reverting back to hurdles. I love that profile and can see him sickening most of these and staying on up the hill.

There are loads of bookies going 4 places and 12-1 so get involved and don’t accept 3 places each way.

The Albert Bartlett Novices’ Hurdle isn’t always won by the flashiest horse in the field and they don’t come much tougher than Ramses De Teille.

The grey has run 22 times and posted a second in the Welsh Grand National before reverting to novice hurdles. He returned from a merited 70-day rest to win his next two starts, at Haydock and Doncaster, and the softer the better.

By contrast Monkfish has had only three races over hurdles but the manner of his latest 20 lengths romp at Thurles in January puts him in the frame.

Slight preference is for another Emerald Isle raider LATEST EXHIBITION (2.50). Paul Nolan’s gelding has built on his initial second to Abacadabras over an inadequate two miles by scoring at Navan (2m 4f) and Leopardstown (2m 6f).

Home hope Thyne Hill, winner of all three races for Philip Hobbs and Richard Johnson this season, is another with leading credentials. This will be his first attempt at three miles but Thyne Hill has been finishing his races strongly, most notably when winning at Newbury last time and over 2m 4f here in November.

This looks like a cracking renewal with the best form coming into the race from the Irish raider, Latest Exhibition who looks to have a strong chance in this for Paul Nolan.

He does look like a thorough stayer, and has been more impressive each time they've stepped him up in trip.

He's not tried the 3m trip as of yet, but the way he powered through the line last time out suggests it will bring out further improvement.

The one huge positive if you're backing this horse is his determination to win, he tries his heart out every single time he races and will battle all the way to the line.

However, though his form is convincing, I'm going to take him on with MONKFISH, as I was blown away by his performance at Thurles. Though he was left in the lead when the second placed horse fell, he was always going to win the race anyway and he showed a nice turn of foot and scooted 20 lengths clear of the rest.

The horse who fell has since won a Grade 3 by 1.75 lengths, so the form is decent enough to not discredit it. I do realise his form is not on the same level as some of the others in the field, but I think there's plenty to come from this horse.

I personally couldn't touch Thyme Hill as I don't think his form is as good as what people make it out to be, and has only ran over 2m 4f, so there's no guarantee he stays.

One positive is that he handles the course, but I wouldn't want to take 4/1 about him.