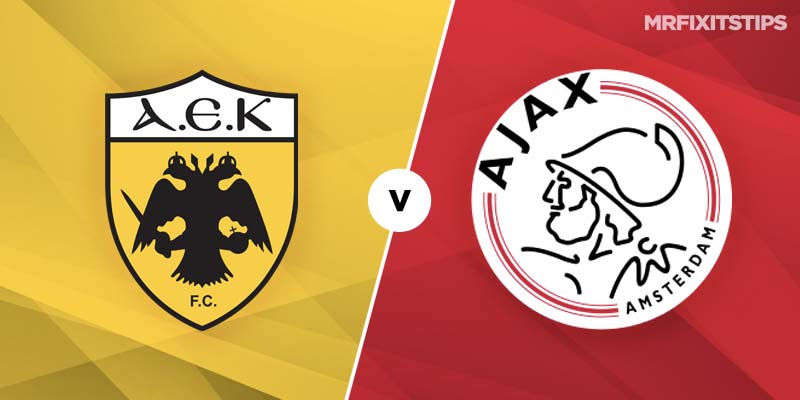 AEK Athens looked a pretty limited side when they saw off Celtic in the Champions League qualifiers and that has been underlined by their performances in the group stage.

The Greeks sit bottom of Group E, having lost all four games, so it's no surprise to see Ajax as 3/4 favourites with 888 Sport for their trip to Athens.

While AEK have been as bad as many feared, the Dutch side have exceeded expectations and head into this game with qualification for the last 16 almost secured.

Ajax sit four points ahead of Benfica and there's just two games to go in the section. With the Portuguese side away to Bayern Munich, even a defeat in Greece might not be enough to scupper Ajax's chances.

The draw looks pretty tempting at 14/5 with 888 Sport as the Greeks, who are 19/5 to win, will be out to salvage some pride in their final home game in the section.

Benfica only beat AEK 3-2 in Athens while Bayern had to wait until the second half for their goals in a 2-0 win.

Viktor Klonaridis scored both of AEK's goals in the home defeat to Benfica and is worth consideration for either first scorer at 9/1 or anytime scorer at 15/4 with 888 Sport if he shakes off a knock to start.

Nicolas Tagliafico scored twice when Ajax crushed AEK 3-0 in Amsterdam but it was just one of those nights for the defender as they remain his only goals this season. He's 13/2 for anytime scorer if you think he'll strike it lucky again.

Midfielder Noussair Mazraoui has also chosen the biggest stage to net his only goals of the season, scoring against Bayern and Benfica. That suggests the Moroccan is a big-game player so he looks overpriced at 19/1 for first scorer and 13/2 for anytime scorer.